Tabatha Southey: My week of living like Donald Trump 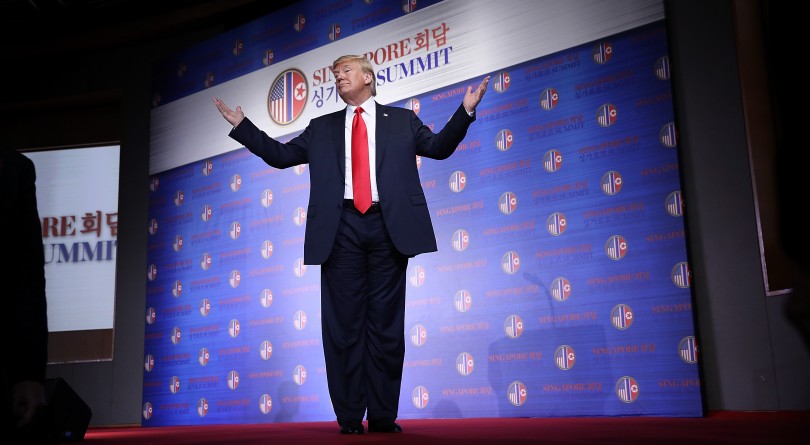 A lot of people were saying no one could have a week like the week I had—a tremendously successful week, inspired by President Donald Trump—but I had the best week! My friends and family did not want me to get involved in modelling my life on Trump’s negotiation skills. They told me this is easily the worst idea I have ever had. But I was so impressed by Trump’s recent performance, I had to give it a shot! Here’s how it went!

On Sunday, I started a bar fight in a Pentecostal church. No one had ever tried this before. Everyone before me was too politically correct to do something so pointless and destructive! No one in that church wanted to fight with me! “Please sit down, sister,” they said, “We’re are all friends here.” Then, “Stop acting so weird. Are you lost? Do you want us to call you a cab?” But I just kept yelling and singing from a different hymn book from the one we’d all just agreed to sing from. Okay, it was an old Sharper Image catalogue, and I really belted it out, until finally a little old lady very viciously said, “Look, I don’t know what you’re after, Tabatha, and I really don’t know where you got that pool cue you’re waving about, but we’re not going to be bullied.” So I left and that is Winning!

I have the best dealmaking CAPITALIZATION, the Angry and Conflicted Style Guide is Very Unfair. Should be called the Witch Hunt Guide!

I spent the rest of Sunday trying to come up with great comebacks for my advisors to deliver on Fox News. Then I realized I don’t have any advisers.

Monday was my best day. My neighbour popped over to ask if she could have some flour to bake cookies. The old Weak on Trade and Crime Tabatha might have just given in and handed over the flour. Previous Administration Tabatha would have thought, “Of course, just last week she spotted me an egg, so it’s only fair I help her now, and besides, this way I’d get some delicious cookies.” But I only make the best deals now, and I’d just seen Trump expertly put Justin Trudeau in his place by tweeting that he was un-agreeing to sign the traditional G7 joint communiqué from the comfort of Air Force One. So this time, I stood firm with my neighbour of many years. I told her I’d go and get the flour she needed, then I ran inside, locked the door and shouted out a second-storey window, “Sorry, cookie-making-neighbour, but I can’t let my friends take advantage of me on Trade anymore. I’m putting the Tabatha pantry first!”

“Whatever, Tabatha,” she said, and went home.

Late Tuesday, I was driving around—looking for a baby to snatch from its mother’s arms while loudly insisting to the heartbroken parent that Obama was forcing me to do it—when I was pulled over by a police officer. He told me my tail light was out and tried to let me off with a warning. Taking inspiration from Trump’s promise to end joint military exercises with South Korea in exchange for the world getting to see lots of photographs that presented North Korea as equal to America, even blending their flags together on a stage—like some kind of colourful Escher from hell—I saw an opportunity. “No!” I demanded, “you’re going to take my driver’s licence, Little Ticket Man!”

Little Ticket Man did not see that coming! And that, I am learning from the online Trump University the world has become, is the art of the deal. You want to keep people guessing! No one should ever be able to figure out how much of your behaviour is you pandering to your base, and how much is your deeply flawed personality.

Little Ticket Man tried to tell me to relax—that driving with a broken tail light at 4 o’clock in the afternoon didn’t warrant my license being revoked—but that didn’t stop Tabatha. By the end of our meeting I’d given that man my licence, passport, health card, and power of attorney. Big win! Gas Prices are so high, OPEC is at it again. I will save a fortune on gas by not being allowed to drive. First Responders are helping Make My Budget Great Again!

On Wednesday afternoon, I told everyone I’d put out a fire that I started. Now haters and losers have reasonably concluded I am a crazed pyromaniac. More Winning!

Then, at the fancy grocery store checkout, the girl at the register said, “That’ll be $9.95.” And I just looked her straight in the eye and said, “Or I could just smash the register and leave.”

“Please don’t smash my register, ma’am,” She said. I stared her right in the eye, the tension built and built and … then I paid her $9.95 and I left. I get the best prices on single avocados!

Not everything went so well though. Over the course of this week I tried to normalize, indeed celebrate, a murderous dictator the way my new role model did. But when he explained to Fox News that you couldn’t blame Kim Jong Un for “having done some very bad things” given how impressive it was to have inherited control of North Korea and murdered a number of his relatives at such a young age, I just couldn’t do it. How does one begin to match describing Kim as a “tough guy” and “one in 10,000”? I’ll just have to settle for giving glowing endorsements of people who use their cellphones in movie theatres. You guys sure know how to liven up a show!

READ MORE: Why it’s important that Trump and Kim get along

I will have to work my way down from there. I just keep thinking of the famous Winston Churchill quote that Churchill never actually said, “It is better to jaw-jaw then to war-war,” but it’s damn right unseemly to get on stage with a man like Kim and basically cha-cha. Trump pitched North Korea to the world like it was a new Trump Hotel franchisee. “They have great beaches,” Trump said at a post-summit news conference. “…Look at that view. Wouldn’t that make a great condo beyond that?” He sent a message to all the other brutal repressive authoritarian states that if they starve their people so as to divert money to a nuclear program, and torture them just for kicks, they too can be featured on an episode of Lifestyles of The Rich and Monstrous.

I’m unsure about how to emulate this, but I’m planning to go golfing with the exhumed corpse of Pol Pot this Saturday.

I went over to negotiate. I told her she was being so indignant, bringing up the groceries we have shared over the many years, and other things, and warned her that not sharing her cookies was killing our Agriculture, but she just said, “Uh, okay, Tabatha, you seem like you could use some space.”

I still did not have cookies. So funny to watch my Fake Friends and Family. They are fighting hard to suggest maybe I should just share my flour in a mutually beneficial trading partnership, or at least not shout at my neighbour about Agriculture so much. Then I could repair the relationships I’d built over the course of many years and people would share their cookies and Make My Snack Great Again. Fake Advice! Next week, I am going to massively overpay for a new car. That will show her! I am getting tired of winning.