Taiwan's coronavirus protocol might be seen as 'extreme' to Canadians, but it works

Tim Sly: Could Canada have benefited from an emphasis on intensive and sustained surveillance, rather than community-wide lockdown? 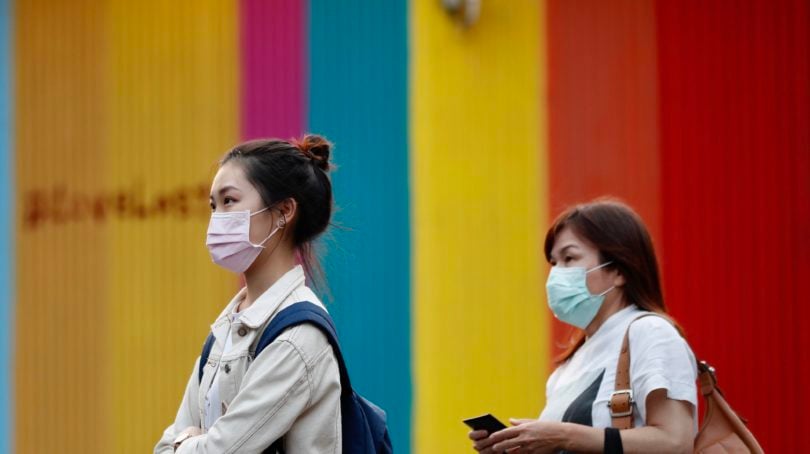 Taiwanese wearing masks as precautionary measures against coronavirus walk past at a street in Taipei, Taiwan, 26 Mar. 2020. (Ritchie B. Tongo/EPA/CP)

Let’s face it, from the first appearance of COVID-19, Canada has been in a better position than our large neighbour to the south—better prepared, better resourced and better organized. But our cases and accompanying deaths are still rising exponentially, while citizens are still hunkered down in basement bunkers, and the economy is in a steep nosedive.

Seventeen years ago, the coronaviral precursor of today’s pandemic, SARS-CoV-1, caused outbreaks in several countries, including Canada, especially Toronto. Shouldn’t we have been much better prepared this time? In 2003, all the affected locations made serious errors. For three months, China delayed reporting cases internationally and was reluctant to release any information. Canada and Taiwan made blunders in the isolation of early cases before the nature of the infection was properly understood, leading to rapid spread among patients, staff, and between institutions. General confusion was evident at all levels.

After SARS, the affected countries resolved to do better next time. Canada established the Public Health Agency of Canada (PHAC) and populated it with people of great expertise and experience.  Their focus was, and remains, disease prevention, health promotion and provision of information. During the present pandemic, news conferences are given almost daily, and Dr. Teresa Tam has become familiar to everyone.

Taiwan, barely 130 kilometres from the coast of China and with considerable daily movement of people to and from the mainland, took a different approach. They built an early-warning system at all air- and sea-ports for incoming threats. The National Health Command Centre (NHCC) in Taipei unifies epidemic control, biological pathogen disaster control, counter-bioterrorism control and central medical emergency operations. Teams of staff remotely assess people arriving at all ports of entry, and monitor broadcasts from China, U.K., U.S.A., Japan, Canada and Australia for notifications of new pathogens or unrecognized diseases. On May 5, 2005, while I was having lunch with the Director, Dr. Chou Jih-Haw, his pager went off; TWCDC staff had become aware of reports of a suspicious white powder found in a Canadian post office.

With a population of 24 million, about two-thirds that of Canada, populating an island roughly the size of Vancouver Island, Taiwan’s state of readiness and preparation has worked remarkably well during the present emergency. It has experienced just 363 cases as of Apr. 4, compared to Canada’s 14,408. That’s only four per cent of the incidence rate for Canada (1.5 versus 38 per 100,000), and just five deaths, compared to 258 in Canada.

Was this achieved through severe lockdown and suppression of social contact and activities? Surprisingly, many businesses are open, restaurants are operating, and children go to school. The Taiwanese approach is one of careful and intensive monitoring and surveillance, and it seems to be working. When you land at the airport, before deplaning, you are required to file a report about your health from your cell phone using an official QR code, and your temperature is taken while still on the aircraft. Surgical masks are worn in public with a two-fold rationale: first, although the masks are not very effective in protecting the wearer, they’re used on the rationale that some protection is better than none; and second, if everyone wears them, anyone who is virus-positive without knowing it, will naturally be shedding less to others. They are distributed to everyone by the government and available in all 7-Eleven stores.

MORE: A heat map of coronavirus cases in Canada

Children go to school, and wear their masks all the time, removing them only to eat lunch. They have their temperature taken at least twice a day, and handwashing is supervised. A third of nurses have school-aged children and having them in school means nurses are free to continue their vital hospital work.

Taiwan uses passport records linked to cell phone records to track personal travel and to help determine if you should be in quarantine. Anyone ordered into quarantine is taken there in a government vehicle, contacted several times a day by surveillance staff, and meals are provided. Recently, people under quarantine have started getting paid.  However, anyone leaving quarantine before their time is up, is brought back and fined heavily. This is a society where health surveillance and protective quarantine is taken seriously, and the infringement of a few social rights during an emergency is not contested or seen as unacceptable.

Handheld infra-red scanners are everywhere in Taiwan, and whether on the street, in a store, office, or subway station, you can expect to have your temperature taken several times a day.

Temperature scans are not reliable and we have the results of several surveys showing that roughly half of virus-positive people will not be detected with an abnormal temperature on arrival at the airport. But if we abandon this tool, we miss the advantage of knowing at least the half of the results that are abnormal. And there’s a chance many of the “missed” virus-positive people would be picked up later in the day at another temperature check.

This layered approach is predicated upon the principle that nothing in science is 100 per cent; no test is free from false negatives or false positives, and the terms “absolute” and “never” have no place in the scientific lexicon. Methods of surveillance and monitoring, essential tools for communicable disease epidemiology, should not be abandoned just because each one “leaks” a bit. Instead, layering the methods, repeating the measurements and overlapping the results appears to get the job done, at least in Taiwan.

Could Canada have benefited from an emphasis on intensive and sustained monitoring and surveillance, rather than community-wide lockdown? It certainly appears to work better than our present system and could have been implemented here to great advantage, not least allowing the operation of some business and commercial activities. But implementation of such containment should have been started at the very earliest stage of the pandemic, long before community spread had become established. And even then, the “longest undefended border” would present very great difficulties. At this juncture, we can only stay the course, appreciating that Canada is holding back the numbers better than in the U.S., while acknowledging that it should have been much better stocked with personal protective equipment, and prepared to manufacture and supply equipment and devices from domestic sources.

Acceptance of strong governmental powers of surveillance, even at the expense of civil liberty, is mostly unquestioned in Taiwan, given the common purpose and its importance. And this is where I suspect the most vociferous pushback would occur in this country if Canada required access into our cellphone location records and programs tracking our international travel. Even during the pandemic of the century and its unprecedented financial, industrial, social and employment disruption, some elements of the public would be horrified about the temporary loss of civil rights. It makes one wonder about the true meaning of “security.”