Terrorism laws have long been used against brown and black men. When will they be used to protect them?

Sadiya Ansari: A new terror charge against a 17-year-old involved in the incel movement signals that law enforcement has finally expanded who they think is a threat 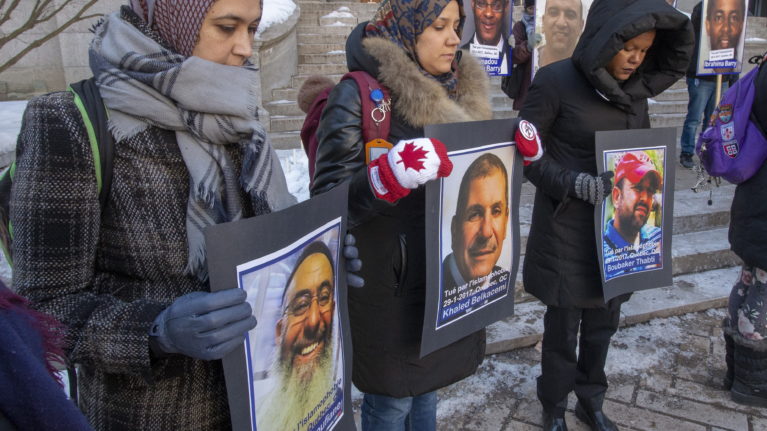 People hold photos of the victims during a vigil on Jan. 29, 2020 in Montreal to commemorate the third anniversary of the mosque shooting in Quebec City that left six people dead. (Ryan Remiorz/CP)

Sadiya Ansari is Toronto-based writer and professor of journalism at Centennial College.

Last week, two words—“terrorist activity”—attached to a murder charge against a 17-year-old who fatally stabbed a woman, signalled a massive shift in Canada’s national security framework. The teen, who can’t be named because of his age, allegedly wielded a machete against 24-year-old Ashley Noelle Arzaga at a Toronto massage parlour in February, killing her and injuring two others.

“Terrorism comes in many forms and it’s important to note that it is not restricted to any particular group, religion or ideology,” the RCMP recently wrote in its press release, which came out this week.

The terror charge represents two shifts. First, out of some 60 charges of terrorism laid since 2001 in Canada, all but one have been related to Islamic terrorism. Second, it’s the first time the incel ideology, which stems from an online community of men who feel they are denied sex by women, has been criminally recognized as terrorism since the movement of “involuntary celibates” surfaced in 2014. According to a police source who spoke with Global News, “the accused in the massage parlour case said he wanted to kill as many women as possible.”

MORE: How do we decide what we consider ‘terrorism’?

This charge represents a reimagining of what national security means in this country. It signals that law enforcement agencies have finally expanded who they think is a threat. Mass murders like the Toronto van attack and Quebec mosque shooting are often referred to as terrorism, but the reality is, the perpetrators of these crimes have not been prosecuted for charges based on terrorism.

While this shift is worth celebrating, why has it taken so long? Terrorism laws have long been used against brown and black bodies. When will they be used to protect them against a growing white supremacist threat?

The double standard is well-documented.

“Realistically, we’ve only ever charged brown people, or people who ascribe to Islamic faith as terrorists before, [while] white people got charged with hate,” says Leah West, an expert in national security law and lecturer at Carleton University.

MORE: One family’s struggle, one year after the Quebec City mosque shooting

But West sees this case as an important shift: “They are finally applying the law equitably.” Under Canadian law, a crime is considered terror if its motive is “in whole or in part for a political, religious or ideological purpose, objective or cause.” And there are other indications there’s movement on who law enforcement agencies view as terrorists—extreme right-wing groups like Blood and Honour and Combat 18 were listed as “terrorist groups” last year, for instance, and a recent Canadian Security Intelligence Service (CSIS) report cites violent misogyny and xenophobic ideologies as “threats”.

Part of the challenge in prosecuting a crime as terrorism is proving the act was motivated by ideology. It may not impact the sentencing outcome, so other than sending a signal to society that the violence was motivated by extremist ideas, there’s little incentive for prosecutors to add a complex layer to a case, says West. Motivation is usually determined by a number of factors—statements made by the accused, associations with groups, online posts, and what the suspect read or watched. When dealing with terrorism cases related to religiously-motivated violence, West says that to establish someone’s ideology a prosecutor might show a jury “whether or not their faith was uber conservative and not aligned with mainstream Islam.”

While we know how law enforcement determines who is considered a terrorist in individual cases, what we often don’t know is how they determine who isn’t a terrorist.

The oft-repeated line after mass murders is that motivation was too difficult to determine. In the case of Alexandre Bissonnette, who walked into a Quebec City mosque and fatally shot six men, a Crown psychiatrist who evaluated the shooter described his act as one “too egotistic to be a terrorist act. But it is a crime steeped in racism even if he doesn’t see it.” It’s a confusing way to say the crime was a racist act but not one motivated by ideology.

Part of the problem is unfounded bias; who society deems capable of holding a certain ideology. “We are much more inclined to think that brown people are more prone to ideological thinking whereas white people are ideology-free or kind of structurally incapable of having an ideology,” says Amarnath Amarasingam, an extremism researcher and assistant professor at Queen’s University.

Amarasingam believes the massage parlour case as a step in shifting that thinking, one that will force conversations about how ideology is recognized in crime.

While the incel movement is a relatively new expression of violent misogyny, I asked Amarasingam why white supremacist movements have been so difficult for authorities to identify, given their history and organizing power in this country, from the Ku Klux Klan making its way into Canada in the 1920s to the Heritage Front in the 1990s, to the Canadian Nationalist Party qualifying as a political party in the last election. Amarasingam attributes part of the problem to living in a society centred around what he calls “white structural privilege”.

While groups like the Ku Klux Klan are over a century old, there are newer white supremacist groups, particularly those with strong online communities, that don’t fit the image of a traditional terrorist group. “It’s hard for the powers that be to fully understand the movements within their own racial group,” he says.

A 2018 internal report unearthed by a Montreal radio station CHMP-FM revealed that 37 members of the Canadian Armed Forces belonged to hate groups or made racist statements between 2013 and 2018. Sixteen were linked to six extreme right-wing groups that espoused “specifically anti-Islam and/or white supremacy” beliefs, including the Proud Boys, the Soldiers of Odin, and Quebec-based La Meute, which was founded by two former members of the armed forces.

Last year, the Department of National Defence came under fire for lack of transparency after it didn’t share how these cases were handled with the public. It then revealed that seven people who belonged to hate groups were no longer with the armed forces and 16 were subject to “counselling, warnings and disciplinary measures,” according to a CBC report.

“Imagine if someone said there were five ISIS supporters in the Canadian Armed Forces,” says Amarasingam. The institutional reaction to discovering neo-Nazis and extreme right-wing elements in the military should be the same, but in this case, Amarasingam says it amounted to a bit of a shrug: “Everyone is like, ‘huh, cool, interesting.’”

This nonchalance reveals how central whiteness is to our understanding of national security. Who is seen as a danger to society depends on who you think is worth protecting. The lack of prosecution of white supremacist violence as terrorism is particularly depressing given that most terrorism charges are handed to brown and black men.

These laws been used to subject brown and black men to surveillance and prosecution over two decades, resulting in devastating damage like the wrongful detention of Canadian Muslims in foreign prisons like Maher Arar. Surveillance has also impinged on the everyday lives of Muslims, with reports of CSIS agents being sent into mosques to look for informants and also turning up at the homes of university students who appear to have one thing in common—Muslims names. This heightened scrutiny goes hand-in-hand with rising Islamophobia, feeding stereotypes that spike hate crimes against Muslims year after year.

While Canada’s terror law itself defines ideology and motive broadly, it’s clearly applied differentially. In the case of Bissonnette, a 2018 public safety report on the threat of terrorism plainly states “Bissonnette was motivated, at least in part, by his self-admitted fear of Muslims,” yet it was not prosecuted as an act motivated by white-supremacist ideology.

“It’s really troubling and puzzling why the court would conclude in Bissonnette’s case that his hatred of Muslims was irrelevant to the fact that he shot Muslims,” says Reem Bahdi, an associate law professor at the University of Windsor.

In a recent paper on racial profiling for the Osgoode Hall Law Review, Bahdi writes about the practice of reading the “silences” in the law: “the unsaid can reveal as much about legal values, priorities, imaginations and possibilities as the stated word.”

I asked where she thinks the “silences” are in Canadian terrorism laws. “That terrorists are Muslims,” she notes. “That violence associated or perpetuated by Muslims is terrorism. Violence perpetuated against Muslims is not as easily identified as terrorism.”

The new use of terror charges against an alleged incel is being celebrated as a sign this will change, that we’re already seeing a more equitable application of the law. But the legacy of law enforcement’s use of these charges leaves me cautious. This case raises an interesting question, but one that remains unanswered: Can a law rooted in racist application ever be applied equitably?