'Thank you for your donation'

Pam Palmater: Tearful apologies and flowery speeches about reconciliation won’t cut it if Trudeau wants the support of Indigenous peoples in the next election. He needs to come clean and take real action. 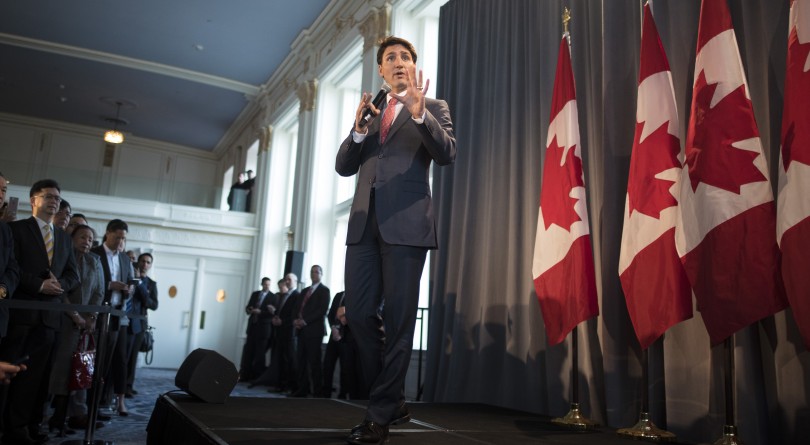 Pamela Palmater is a Mi’kmaw citizen and member of Eel River Bar First Nation. She has been a practicing lawyer for 18 years and currently holds the chair in Indigenous governance at Ryerson University.

“No relationship is more important to me and to Canada than the one with Indigenous peoples.” This is how Liberal Prime Minister Justin Trudeau differentiated himself from former Conservative Prime Minister Stephen Harper in regards to Crown-Indigenous relations. More than just an election mantra, Trudeau called for a total renewal of the relationship — a nation-to-nation relationship — one based on the recognition of rights and respect. It was a welcome change in political rhetoric from the former Conservative government that was so hostile to First Nations, Harper inspired the historic, nationwide Idle No More movement. Months of round-dances, teach-ins, protests, blockades and litigation set off a media storm which highlighted the poor relations between Canada and First Nations. Trudeau promised to change it all by respecting our rights, respecting our right to say no to development on our lands and repeal all of Harper’s laws imposed on First Nations without our consent.

Sadly, he broke all of his promises by flip-flopping on his support of our right to say no to development (think Trans Mountain pipeline) and failing to repeal a single piece of Harper’s First Nation legislation. He also denied First Nation women and children equality under the Indian Act (despite court and United Nations decisions directing him to stop) and failed to abide by the decision of the Canadian Human Rights Tribunal (and seven non-compliance orders) to stop discriminating against First Nations children in foster care.

However, looked at from the relationship perspective, he also broke his promise to treat First Nations with respect. Earlier this week at a Toronto event held for Liberal supporters who donate at least $1,500 to the Liberal Party of Canada, a First Nation protester called out Trudeau for failing to act on the mercury poisoning in Grassy Narrows First Nation, in northern Ontario. As security escorted her out, Trudeau mocked her by thanking her for her donation to the Liberal Party of Canada, sparking laughter from Liberal supporters. While they went on to eat their expensive dinners, victims of mercury poisoning in Grassy Narrows still wait for the promised funding to build a treatment centre to treat those with mercury poisoning — now more than 500 days after it was initially committed.

While it would not be fair to judge a Prime Minister for a single lapse in judgement, which he claims is the case with the protester in Toronto, it is fair to look at recurring problems and consider whether an identifiable pattern has emerged.

This isn’t the first time Trudeau has disrespected a First Nation person at a town hall meeting. In 2017, an elder at one of Trudeau’s town halls in Winnipeg was told to sit down or he would be tackled — referring to his security detail. Not a very Prime Ministerial response to someone who was, in fact, trying to calm down the crowd. It was only several months ago that Trudeau sparked outrage from First Nation leaders all over Canada for his patronizing and disrespectful treatment of Chief Judy Wilson of the Union of B.C. Indian Chiefs (UBCIC). Chief Wilson’s question about the Trans Mountain pipeline expansion were met with what the UBCIC Grand Chief described as “condescending and sexist” remarks which were “offensive, as well as threatening.” Trudeau addressed all other Chiefs as ‘Chief,’ but called Wilson by her first name and warned her to “be careful.”

It would be hard to forget the leaked video of Trudeau berating Regional Chief of the Federation of Sovereign Indigenous Nations (FSIN) Bobby Cameron for “allowing” all the Chiefs around the table to speak. Trudeau called Regional Chief Cameron by his first name and claimed it was “unfair” to go beyond the one-hour meeting, and not in the spirit of reconciliation. Some of the Chiefs in the video expressed frustration that they had driven very far to attend this meeting and represent the concerns of their people. While the FSIN denied leaking the video, they did confirm that the frustration expressed by the Chiefs was real.

Trudeau also falls down in how he deals with women generally. As a self-declared feminist Prime Minister, he seems to have had significant problems working with female cabinet ministers. Former Attorney General and Minister of Justice Jody Wilson-Raybould resigned in protest after she was demoted to Minister of Veterans Affairs, accusing Trudeau of pressuring her inappropriately regarding the SNC Lavalin criminal case. Former Treasury Board Minister Jane Philpott resigned because of how he handled the SNC Lavalin matter citing a “loss of confidence,” and MP Celina Caesar-Chavannes quit the Liberal caucus shortly thereafter, accusing Trudeau of yelling at her when she tried to address issues with him. It would seem that his actions in practice don’t match his declared commitment to women’s rights generally, or his commitment to renewed relations with Indigenous peoples specifically.

While Trudeau has since apologized for not treating the Grassy Narrows protester with respect, he certainly didn’t commit to immediately flow the long overdue funding for the promised mercury poisoning treatment centre.

Taken together, this evidence seems to support the accusation of NDP MP Romeo Saganash that Trudeau “doesn’t give a f–k” about Indigenous peoples or their rights. Tearful apologies and flowery speeches about reconciliation won’t cut it if he wants the support of Indigenous peoples in the next election. Trudeau’s best bet would be to come clean, admit his failings, and take real action to make amends for failing to deliver on critical promises that mean life or death in our communities.