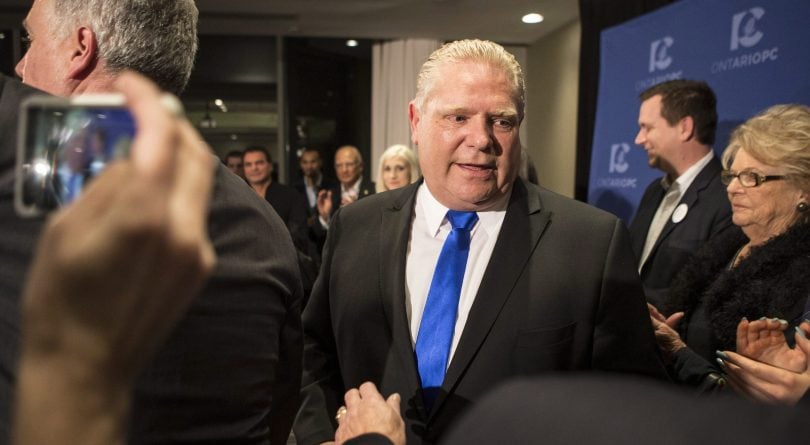 Doug Ford leaves a press conference after being named as the newly elected leader of the Ontario Progressive Conservatives at the delayed Ontario PC Leadership announcement in Markham, Ont., on Saturday, March 10, 2018. THE CANADIAN PRESS/Chris Young

The former Toronto city councillor and current leader of the Ontario Progressive Conservative Party has been filmed handing out $20 bills to constituents; he’s said that a treatment home for children with autism “ruined” the neighbourhood he lived in. Meanwhile the Globe and Mail has alleged that when he was growing up, for several years, Ford was a “go-to dealer of hash.” Put simply, there is no shortage of fodder for Ford’s many critics on the left who feel he is unsuited for the job of premier of Ontario.

So when an outrageous 2014 tweet from a @CouncillorFord Twitter account made the rounds this week, its vile contents fit all-too-perfectly into the view so many have of Ford. In the tweet, the author mocks Olivia Chow, then a candidate for the Toronto mayoralty, for her accent. “Maybe @OliviaChow should use the @TorontoLibrary to learn Engrish,” the tweet reads. “She’s not mayor material, anyone from the Ford family is!”

It is unquestionably racist.

It is also very much fake.

READ: A double-double of cynicism in Ontario

Not in the intentionally designed fake-news, out-to-get-you way—the @CouncillorFord account was transparent satire, at least when it was active; it’s now suspended. But that hasn’t stopped screen grabs of the tweet from being widely shared and discussed. We know that, thanks to Google’s Trends tool, which shows that over the past week in Ontario, the six fastest-rising search queries related to “Doug Ford” have been about that tweet, ranging from “Doug Ford engrish” to “Doug Ford racist tweet.” 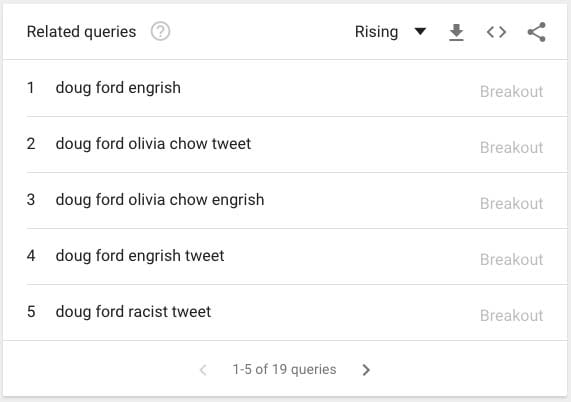 As the Ontario election campaign gets underway and various anti-Ford campaigns emerge, the viral sharing of the tweet is a dangerous and wrong way to make a point.

The fake Ford “Engrish” tweet is currently at a low burble. But it’s a timely reminder to reconsider a myth of the left: that it is the right that has a monopoly on believing and spreading falsehoods. No matter your political alignment, fakery that preys on confirmation bias is a dangerous thing, and to think that any person is immune is all the more fraught.

We’ve seen hoaxes, fakes and satirical messages be readily shared and consumed by the left in the United States, from the rampant resharing of a fictional quote that claimed Donald Trump told People in 1998 that Republicans are “the dumbest group of voters in the country,” to the many tweets and fake stories around the Russia investigation. There’s an entire cottage industry devoted to faking tweets from Donald Trump, riddled with typos and factual inaccuracies, including this fairly clearly faked one that was retweeted more than 28,000 times, which is telling about the state of what Americans believe could be tweeted by the President of the United States. There was also a widely shared—and fake—story from “Alternative Media Syndicate” that alleged police were setting fire to the campsites of people protesting the Dakota Access Pipeline.

No matter what the easy provocations indicate, the hard, human work of politics is never black-and-white, and rare is the person who does not enter politics with the earnest desire to do the right thing. Regardless of a person’s disagreeable qualities, no one deserves to be slandered. Whether voters agree with their platforms, policies and personalities, that’s entirely subjective; the facts, though, are not.

Confirmation bias blinds us to that fact, and stops us from being able to assess people according to what they really stand for, as Angela Wright wrote in Maclean’s recently: “The left often characterizes conservatives as heartless program slashers who hate women, gays, and minorities; the right, meanwhile, routinely paints liberals and progressives as snowflake crybabies who want to shut down free speech with invented identity politics.” And such relentless caricaturing on the part of parties on the left and the right only softens the ground for folks who either aren’t fair dealers or who are so willing or eager to become aggrieved that they suspend critical thought long enough to believe and share something fake. And with social media deluging us with more information than ever before, it’s a climate where there’s simply less opportunity to stop and think—a problem that knows no partisan bounds.

The Ontario election hasn’t even been called yet, and it’s already shaping up to be one of the most rancorous in memory. So this is an ideal moment to recognize that no person, regardless of their politics, is immune from confirmation bias—and that our democracy deserves better than decisions hardened by fiction. Let’s not do the foundational practice of voting a disservice by being swayed by instincts and truthiness instead of truth itself; you deserve public officials that are voted in or out based on what you know—and not just on what you think you know.

Vigilance may not feel as good as easy outrage—but our democracy demands it.