Adnan R. Khan: With the U.S. withdrawal looming, the Afghan government is attempting to curb women’s rights. Meanwhile, Canada is more interested in playing whack-a-mole with terrorism than doing the hard work of helping a country devastated by it 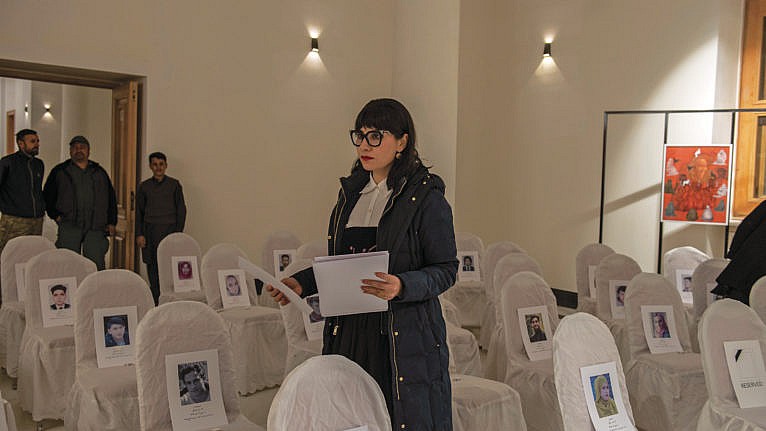 Akbar at her exhibit; each empty chair cradles the picture of a person killed by extremists (Kiana Hayeri/The New York Times)

Rada Akbar’s personal nightmare began late last year with what seemed, at least at first, like prank calls to her cellphone. Unlike the usual phishing calls a woman might receive in Afghanistan, where lonely men randomly dial a mobile phone number and hope a female voice picks up, these calls were from women—and they knew her name.

For Akbar, a 32-year-old artist and outspoken proponent of women’s rights, the calls were chilling. For many young Afghans like her, 2020 was not the year a deadly virus swept through their country but the year they became the targets of an unprecedented assassination campaign. COVID-19 hunted Afghanistan’s elderly and vulnerable; the Taliban and other extremists were hunting its youth.

“The killings intensified around the end of the year, to the point where they would kill as many as five people in a day,” Akbar tells me by telephone from Kabul. “I was warned that there were women working for ISIS, or the Taliban, or criminal groups who were following targets for months.”

When two women posing as tutors managed to get past the security guards posted at Akbar’s apartment complex and showed up at her front door asking detailed questions about her life—Is she married? Does she live alone?—Akbar felt the walls closing in. By early January, she was so terrified that she had locked herself away at home and abandoned work on her next exhibition, Abarzanan, meaning “superwomen,” slated to open in March. It was supposed to be the third instalment of the yearly exhibition, celebrating the strength and power of Afghan women. But this year, Akbar felt powerless, and her strength had been drained.

By early February, she had left Afghanistan for India.

Akbar was not alone in seeking an escape from Afghanistan’s suffocating war. Since the U.S. signed its withdrawal agreement with the Taliban in February last year, violence against Afghan civilians has escalated. According to a recent United Nations report, civilian deaths, particularly the targeted killings of journalists, intellectuals, professionals and civil society leaders, many of them women, spiked in September, after the Afghan government opened peace negotiations with the Taliban. This year, more than 60 people have been assassinated.

Many of the victims belong to Afghanistan’s new generation of leaders and activists. I wrote about this group back in 2017, when they were taking the lead in Kabul’s municipal government and setting up their own civil society organizations and businesses. They were hopeful and energized; and they were pleading with the international community not to abandon them. Today, many of them have left Afghanistan, or are planning to leave. On a near daily basis, I hear about another businessperson or young Afghan scholar arriving in Istanbul. Every week, there is a gathering where these young people tell stories about the threats they face, about the sticky bombs attached to the undercarriages of cars, about the friends they have lost.

The assassination campaign follows a pattern, one journalist (requesting anonymity because she plans to return to Kabul) told me. Like the communists who took power in Afghanistan in 1978, and the warlords who took power in 1992, the Taliban are eliminating the country’s young intellectuals and activists. “There are not many of us in the country,” she said. “So they just have to kill a few hundred and the rest will go either silent or flee.”

The implication is that the Taliban are convinced they have won the war and are now eliminating any potential opposition. It’s what anyone who has followed Afghanistan’s trajectory closely has been warning would happen after the Trump administration signed its ill-conceived withdrawal agreement with the Taliban. If it wasn’t for that deal, many of the young Afghans I talked to believe, there would be no assassination campaign.

With the May 1 deadline for the U.S. withdrawal looming, the prospect of even more violence has put Afghanistan’s future leaders and activists in a state of near panic. Recent attempts by the Afghan government to curb women’s rights are seen as a test of how much room it has to manoeuvre in its negotiations with the Taliban over a future power-sharing agreement. And it seems girls’ education and women’s rights are negotiable.

That fact is particularly frustrating for me, as a Canadian who spent years in Afghanistan listening to Canada’s military commanders and diplomats talk about how they were in the country to help Afghanistan’s women and girls. But since Canada’s withdrawal in 2011, its attention has ricocheted from Iraq to Mali, proving that the Canadian government is more interested in playing whack-a-mole with terrorism than doing the hard work of helping a country devastated by terrorism ensure terrorists never take root on its soil again.

Canada may have given up on Afghanistan, but young people like Akbar haven’t. After two weeks in Delhi, clearing her mind and building up her courage, she returned to Kabul, determined to complete her exhibition. It launched on March 8 and ran for two weeks at Kabul’s iconic Darul Aman Palace. Akbar decided to dedicate the exhibition to eight Afghan women who have been killed in recent years. In a video installation, she delivers a speech to those killed by the Taliban and other extremists, each lost life represented by an empty chair cradling a picture of the deceased and a burning candle.

“The world no longer seems to be shaken as our human bodies collapse, one after the other,” she tells her spectral audience. “I wish I could tell you we are living better lives. I wish I could say humanity is kinder, more compassionate, more loving. I wish we never lost any of you. I hope you are resting in peace, because we are still not living in peace.”

This article appears in print in the May 2021 issue of Maclean’s magazine with the headline, “The women Canada failed.” Subscribe to the monthly print magazine here.