The best of Allan Fotheringham

For decades, Allan Fotheringham’s legendary column graced the back page of Maclean’s. No one kept an eye on politics quite like Fotheringham, whose irreverence and searing criticism—punctuated by colourful nicknames applied liberally to leading politicians of the day—defined an era. “With a pen as sharp as a stiletto, Fotheringham slashed his way into the national conversation at a time when the country’s fate seemed everywhere at risk,” writes Tom Hawthorn in his obituary. Former editor-in-chief of Maclean’s, Robert Lewis, writes that he “redefined political writing in Canada—even as he dressed like Gay Talese.” Read some of Fotheringham’s greatest hits from our archives below. 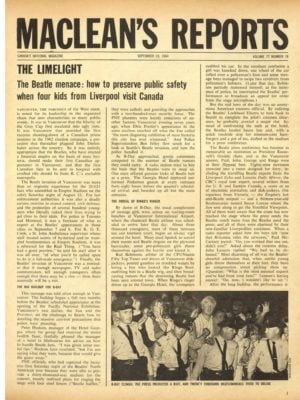 The Beatle menace: how to preserve public safety when four kids from Liverpool visit Canada, SEPTEMBER 19 1964

VANCOUVER, THE NARCISSUS of the West coast, is noted for its leadership in the organized chaos that now characterizes so many public events. It was in Vancouver that the hilarity of the Grey Cup first escalated into ugly riots. It was Vancouver that provided the first raucous shouting-down of a Canadian prime minister in the 1962 election campaign, a precedent that thereafter plagued John Diefenbaker across the country. So it was entirely appropriate that the Beatles, who have erected a financial empire on the basis of mass hysteria, should make their first Canadian appearance in Vancouver, and that the first Canadian fans to be sent to hospital with crushed ribs should be from B. C.’s excitable metropolis.

The Beatle invasion of Vancouver was more than an orgiastic experience for the 20,621 fans who assembled in Empire Stadium on the sultry Saturday night of August 22. For law enforcement authorities it was also a deadly serious exercise in crowd control, civil defense, and the protection of several hundred youngsters who literally risked their lives trying to get close to their idols. Read the rest. 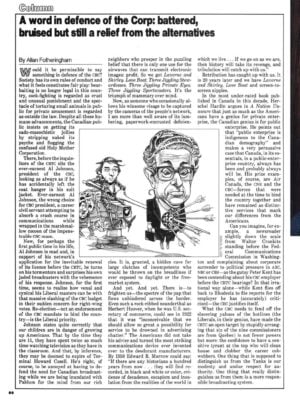 A word in defence of the Corp: battered, bruised but still a relief from the alternatives, OCTOBER 23, 1978

Would it be permissible to say something in defence of the CBC? Society has its own rules of conduct and what it feels constitutes fair play: bearbaiting is no longer legal in this country, cock-fighting is regarded as cruel and unusual punishment and the spectacle of torturing small animals in public for private amusement is regarded as outside the law. Despite all these humane advancements, the Canadian public insists on getting its sado-masochistic jollies by stripping naked its psyche and flogging the confused old Holy Mother Corporation. Read the rest here. 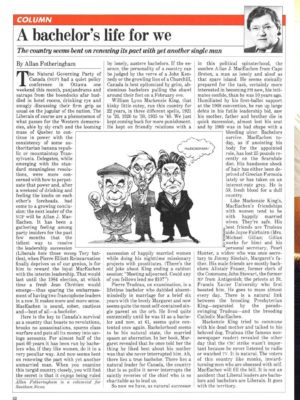 The Natural Governing Party of Canada (NGP) had a quiet policy conference in Ottawa one weekend this month, panjandrums and satraps from the boondocks afar huddled in hotel rooms, drinking rye and smugly discussing their firm grip as usual on the jugular of the nation. The Liberals of course are a phenomenon of what passes for the Western democracies, able by sly craft and the looming mass of Quebec to continue in power with the consistency of some authoritarian banana republic or mountaintop Transylvania. Delegates, while emerging with the standard meaningless resolutions, were more concerned with how to perpetuate that power and, after a weekend of drinking and feeling the knobs on each other’s foreheads, had come to a growing conclusion: the next leader of the NGP will be Allan J. MacEachen. It has been a gathering feeling among party insiders for the past few months that the tidiest way to resolve the leadership succession (Liberals hate those messy Tory battles), when Pierre Elliott Reincarnation finally deprives us of our genius, is for him to reward the loyal MacEachen with the interim leadership. That would last until the 1984 election, at which time a fresh Jean Chrétien would emerge—thus sparing the embarrassment of having two francophone leaders in a row. It makes more and more sense. MacEachen is sound, sober, cautious and—best of all—a bachelor. Read the rest here. 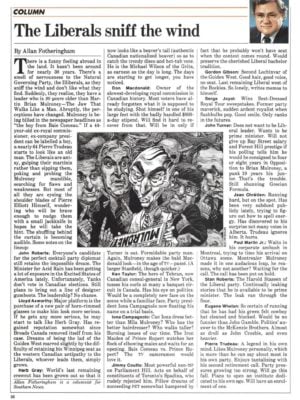 There is a funny feeling abroad in the land. It hasn’t been around for nearly 30 years. There’s a smell of nervousness to the Natural Governing Party, the Illiberals, as they sniff the wind and don’t like what they find. Suddenly, they realize, they have a leader who is 20 years older than Martin Brian Mulroney—The Jaw That Walks Like a Man. Abruptly, the perceptions have changed. Mulroney is being billed in the newspaper headlines as “the boy from Baie Comeau.” If a 44year-old ex-royal commissioner, ex-company president can be labelled a boy, a nearly 64 Pierre Trudeau starts to look like an old man. The Liberals are antsy, gulping their martinis rather than sipping them, poking and probing the Mulroney mandible, searching for flaws and weaknesses. But most of all they are eyeing the shoulder blades of Pierre Elliott Himself, wondering who will be brave enough to nudge them with a small jackknife in hopes he will take the hint. The shuffling behind the curtain is becoming audible. Read the rest here. 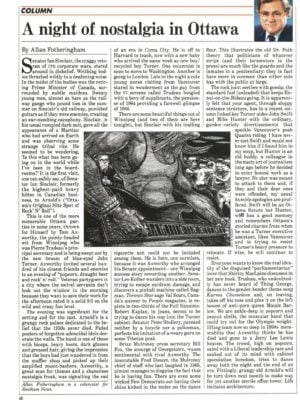 Senator Ian Sinclair, the craggy veteran of CPR corporate wars, stared around in disbelief. Writhing bodies thrashed wildly to a deafening noise. In the midst of the bodies was the retiring Prime Minister of Canada, surrounded by nubile maidens. Sweaty young men, almost as bare as the railway gangs who pound ties in the summer on Sinclair’s old railway, punished guitars as if they were enemies, creating an ear-numbing cacophony. Sinclair, in his usual rumpled dark suit, gave all the appearance of a Martian who had arrived on Earth and was observing some strange tribal rite. He seemed to be wondering, is this what has been going on in the world while I’ve been in the boardrooms?’ It is the first visit, one can safely say, of Senator Ian Sinclair, formerly the highest-paid heavy hitter in Canadian business, to Arnold’s (“Ottawa’s Original Nite Spot of Rock’ N’ Roll”). Read the rest. 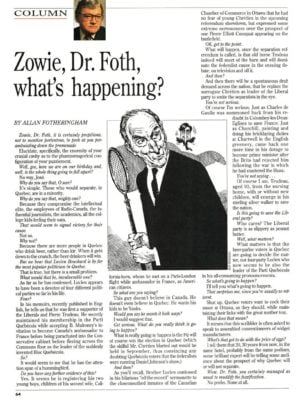 Zowie, Dr. Foth, it is certainly propitious, not to mention portentous, to peek at you perambulating down the promenade.

Elucidate, specifically, the enormity of your cranial cavity as to the phantasmagorical configuration of your puzzlement.

Well, gee, here we are on our birthday and, well, is the whole thing going to fall apart?

It’s simple. Those who would separate, in Quebec, are in a minority.

Why do you say that, mighty one?

Because they compromise the intellectual elite, the employees of Radio-Canada, the influential journalists, the academics, all the college kids feeling their oats.

That would seem to signal victory for their cause. 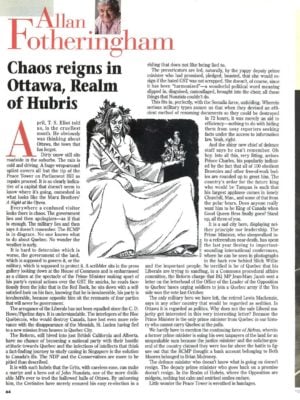 April, T. S. Eliot told us, is the cruellest month. He obviously was thinking about Ottawa, the town that fun forgot.

Dirty snow still sits roadside in the suburbs. The rain is cold and driving. A huge wrap-around splint covers all but the tip of the Peace Tower on Parliament Hill as repairs proceed. It is so clearly indicative of a capital that doesn’t seem to know where it’s going, enmeshed in what looks like the Marx Brothers’

A Night at the Opera.

Everywhere a confused visitor looks there is chaos. The government lies and then apologizes—as if that is enough. The military lies and then says it doesn’t remember. The RCMP is in disgrace. No one knows what to do about Quebec. No wonder the weather is surly. 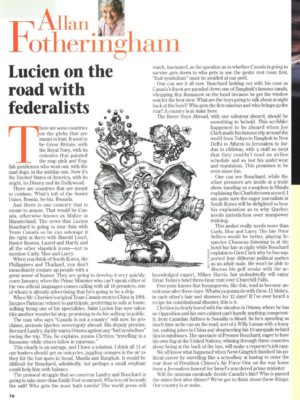 Lucien on the road with federalists, DECEMBER 9 1996

There are some countries on the globe that are meant to lead. It used to be Great Britain, with the Royal Navy, with its colonies that painted the map pink and English gentlemen who went out, with the mad dogs, in the midday sun. Now it’s the Excited States of America, with its might, its Disney and its Hollywood.

There are countries that are meant to confuse. What’s left of the Soviet Union. Bosnia. Serbia. Rwanda.

And there is one country that is meant to amuse. That would be Canada, otherwise known as Malice in Blunderland. The news that Lucien Bouchard is going to tour Asia with Team Canada so he can sabotage it fits right in there with Harold Lloyd, Buster Keaton, Laurel and Hardy and all the other slapstick icons—not to mention Curly, Moe and Larry.