The betrayal of Nicaragua and the Canadians who backed the country

Terry Glavin: Daniel Ortega's tyranny may be the final challenge of the Sandinista movement that many Canadians helped foster 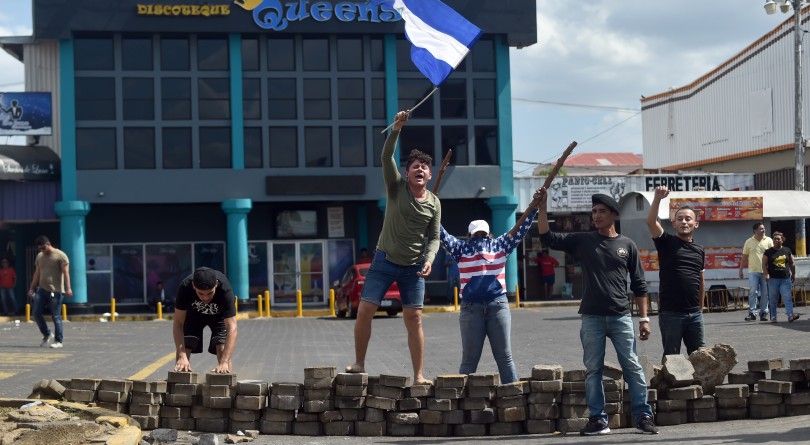 Shopkeepers guard their business amid looting during protests against the government's reforms in the Institute of Social Security (INSS) in Managua on April 22, 2018 (RODRIGO ARANGUA/AFP/Getty Images)

After killing at least 27 demonstrators, throwing more than 120 protest leaders in jail, shutting down a half dozen television stations and sending out pro-government goons to beat up journalists, Nicaragua’s increasingly corrupt and decrepit Sandinista government appears to have finally backed itself into a corner.

Following two weeks of marches and rallies, tens of thousands of protesters brought the capital city of Managua to a near standstill on Monday after forcing President Daniel Ortega to back away from a plan to hike taxes and reduce benefits from the country’s nearly bankrupt social security system, the Instituto Nicaraguense de Seguridad Social (INSS).

The students and pensioners at the head of the uprising say Ortega and his cronies have spent the past decade looting INSS funds, turning surpluses into deep deficits, and the INSS scandal is the last straw. Transparency International places Nicaragua in 145th place out of 176 countries on its Corruption Perception Index. Bribery, brazen cronyism and persecution of dissidents has exhausted the public’s patience.

On Tuesday night, the Roman Catholic hierarchy intervened, hoping to soothe public rage with a mediation process. Managua Archbishop Leopoldo Brenes proposed a “national dialogue” to break the standoff, but with no timeline or terms only Ortega and some business leaders were signalling a willingness to participate.

Several protest leaders insist that in light of the government’s brutality over the past two weeks the only thing to negotiate is Daniel Ortega’s departure from the country along with his wife, Rosario Murillo, who is also vice-president.

MORE BY TERRY GLAVIN: What makes the Ice Age footprints found in B.C. so remarkable

So far, the demands of the “April 19 University Movement” are confined to assurances of criminal charges against police officials involved in the murder of protesters and the removal of several senior police officials. But it’s hard to see Ortega holding on without resorting to more violence.

Even in the northern city of Leon, a renowned revolutionary stronghold from the days when the Sandinistas were a rebel army, public sentiment has turned against the government. “Ortega is like Somoza,” the former Sandinista guerilla Sergio Medrano told Agence France Press on Monday, referring to the dictator Anastasio Somoza, the dictator overthrown by the Sandinistas in 1979. “They are the same.” Pro-Ortega thugs burned a university campus and a radio station in Leon last Friday night.

The Nicaraguan affiliate of PEN International has documented violent assaults on 11 journalists carried out by National Police and pro-government thugs since the protests began. Last Saturday night, in the town of Bluefields, journalist Angel Gaona, director of the independent news program El Meridiano, was shot and killed while broadcasting live via Facebook.

While violently suppressing news coverage, Ortega’s government has resorted to propaganda, alleging that criminal elements and foreign influences are behind the protests. He’s won support in the usual left-wing authoritarian circles—Venezuelan strongman Nicolas Maduro called the protests a “violent ambush” by troublemakers—but Nicaragua’s television stations were back on the air Tuesday, and most of the rounded-up protest leaders were released from prison, dropped off at various points around Managua, in bare feet, some in prison jumpsuits, their heads shaved.

Having ruled Nicaragua for 22 of the past 39 years, Ortega’s Sandinistas have aligned closely with the authoritarian regimes in Russia, Venezuela and Cuba, and while having happily embraced capitalism, Ortega has increasingly adopted the police-state habits of those regimes.

Pulling the plug on Nicaragua’s television news stations made it difficult to know what was happening last week—a Global Affairs Canada travel advisory unhelpfully suggested that visitors should “monitor local media for information on ongoing demonstrations.” But from the outset, it has been exceedingly difficult to cover up the extent and the nature of the protests.

On Monday, the legendary Nicaraguan novelist Sergio Ramirez, a leading figure of the Sandinista revolution and the country’s vice-president from 1985 to 1990, was awarded the Cervantes Prize, the most prestigious Spanish-language literary award. Accepting the prize at a ceremony in Spain, Ramirez paid tribute to the protesters killed in the violence back home.

“Let me dedicate this prize to the memory of the Nicaraguans who in recent days have been murdered on the streets after demanding justice and democracy, and to the thousands of youths who continue to fight with nothing more than their ideals to make Nicaragua a republic again,” Ramirez said.

Ortega long ago betrayed the romantic democratic-socialist ideals that sustained the Sandinista movement through the years of the revolution and through the bloody war with the “Contra” guerrillas funded and armed by U.S. President Ronald Reagan. Ortega’s degeneration into just another Latin American caudillo has betrayed not only Nicaraguans, but also the thousands of Canadians who supported the revolution in its early innings.

Canadians were at the forefront of international-solidarity campaigns for the Sandinistas in the early years. During the 1980s, the Vancouver-based “Tools for Peace” network brought together 126 local committees across Canada that raised funds for Nicaraguan development programs and literacy drives. Organized in church halls, trade union offices and on campuses, the initiative broke though the Cold War blockade and chartered ships to transport equipment and supplies to Nicaragua.

British Columbia artist Bill Horne, 63, remembers those days well. Horne worked with Amnesty International as Canada’s anglophone “special action coordinator” for Central America from 1979 to 1981, and later on he and his partner, fellow artist Claire Kujundzic, spent a year in Nicaragua working on community art projects. Kujundzic also had a contract designing a series of stamps for the revolutionary government’s post office.

It has been obvious since the 1990s that Ortega is a nasty, slippery character, but the democratic spirit of the revolution has persisted, in spite of Ortega and his clique, Horne said. It is only now that the legacy of the revolution is facing what may be its final challenge. “It’s hard to keep up,” Horne told me. “Things are happening very quickly, but there are no progressive voices in Nicaragua defending Ortega anymore. Tens of thousands of people died for the revolution, and international condemnation of what has been happening has been slow to develop in the non-Spanish speaking countries. The dregs of the solidarity movement in North America have been really slow to respond.”

Horne said the same Canadian organizations that supported the revolution should lend their voices and bring their influences to bear, now, on behalf of the Nicaraguan pensioners who have been marching in the streets and facing down battalions of police, and on behalf of the students occupying their university campuses.

“It’s pretty demoralizing and discouraging,” Horne said. “But at the same time, what’s inspiring is that people are taking Sandinista symbols and throwing it all back in the government’s face. People are digging up the old paving stones again. They have had enough of the corruption and the repression.”