Opinion: Candy-coloured photo-ops are masquerading as museum experiences—and they're making an equivalence between Instagram content and contentment 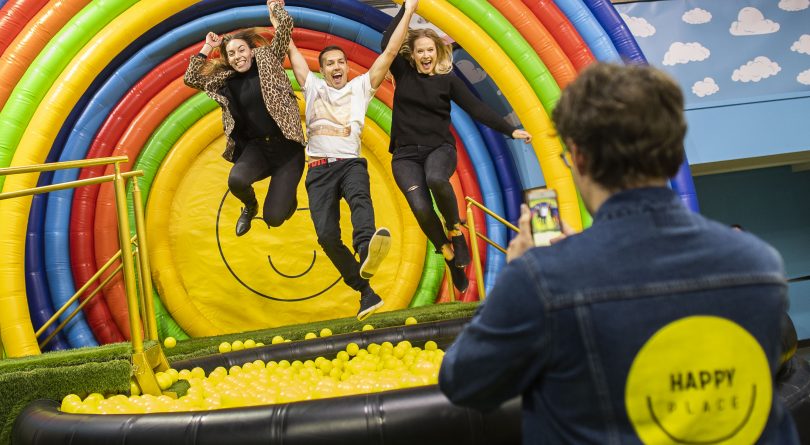 John Semley is the author of Hater: On the Virtues of Utter Disagreeability.

Located on an unassuming strip of Venice Boulevard in Los Angeles’s historic Culver City district, the Museum of Jurassic Technology must literally be seen to be believed.

Billing itself as “an educational institution dedicated to the advancement of knowledge and the public appreciation of the Lower Jurassic,” the exhibits contained therein—miniatures of L.A.-area trailer-park communities, the journals of an imaginary neurophysiologist, velvety paintings of Soviet space dogs, and all manner of other astoundingly detailed miscellany—do not correspond with the geologic period of the lower jurassic or, more commonly, “early jurassic”. That’s precisely the point: its collections of curiosities are entirely fabricated, the stuff of unadulterated, and remarkably detail-oriented, imagination. It is essentially an exceptionally elaborate art installation, gussied up as a museum.

But the Museum of Jurassic Technology also demands to be seen because it has a strict no-photography policy.

Happy Place, another L.A. art/exhibition piece that recently “popped-up” at Toronto’s Harbourfront Centre, is similarly consumed with fakery. Yet it is fakery of a different, and perhaps more sinister, sort. Customers pay $32.50 to snake through a series of large-scale exhibitions designed to be “Instagrammable”—that is, to provide a quirky or otherwise unique backdrop for a photo to be posted on social media. The media boilerplate talks of “immersive rooms” and moments “curated” to, in bold-lettered font, “Capture Your Happy.”

Young women purse their lips in front of oversized high heel shoes made of candy. Young fathers front with tough-guy snarls beside an enormous light-up sign that just says HAPPY. I counted 40-plus people lined up for the right to sit in a canary-yellow clawfoot bathtub surrounded by walls of rubber-duck toys. Couples jump hand-in-hand into an adult-sized ball pit, presumably hoping for photos that might someday appear on a wedding invitation, and working to convey that they are radiantly, unselfconsciously happy. Contrarily, if you are the kind of person who regards such displays with nothing but narrow, withering contempt, then Happy Place is bound to bring your stomach to a rolling gurgle—which, in the flatland of modern ennui and misery where feeling anything at all is a rarefied experience, may itself be worth $32.50.

For all its ostensible specialness as an immersive selfie-taking backdrop, Happy Place feels consistent with a larger trend towards “immersion” in art gallery and museum spaces. Earlier this year, the Art Gallery of Ontario’s website was overwhelmed with hopefuls attempting to secure tickets to Yayoi Kusama’s Infinity Mirrors: a series of glittering reflective rooms meant to represent the artist’s mental trauma, which were in turn taken up as walk-in dioramas for photos. (Such images have the distinction of both looking cool and effectively announcing, “Look! I managed to get into Infinity Mirrors!” which are the twin engines of a successful Instagram photo.) The exhibition was so popular that the AGO is currently crowdfunding $1.3 million to permanently install an original Kusama room.

There’s also Toronto’s Museum of Illusions, a sensory “playroom” devised to explore perception’s various deceptions, while also offering ample selfie opportunities. New York’s Museum of Ice Cream was a pioneer in this field, eschewing education about the dairy treat for the eye-candy pleasure of Instagram backgrounds. And at Singapore’s National Museum, visitors can experience Story Of The Forrest, an “immersive installation” that transforms a collection of botanical watercolours drawings into a walk-through, 3-D experience.

It is all too easy for the serious-minded individual, for whom museums and art galleries are intended to be places of considered and slightly tedious contemplation, to despair at all this—especially since the ascent of these immersive experiences seems to correspond with a more general disinterest in such institutions. (“Are We Falling Out Of Love With Art Galleries?” asked The Telegraph in 2015; “Are Museums Stills Relevant?” CNN queried in 2017.) Mounting a highly photographable exhibit can scan as vaguely degrading—like when a fine-dining restaurant adds a cheeseburger or ice cream sundae to an otherwise thoughtful menu—but such exhibitions are not without precedent. How is a selfie snapped at Happy Place or Infinity Mirrors any different, really, from a flash-bulb photo of some kids mugging inside an old-school pillory on a class trip to a low-budget pioneer village? And besides, it’s been happening well before it became an explicit trend: At the Louvre, madding crowds have long lined up to take photos of and with the Mona Lisa, as if trying to draw some direct comparison between their own conventional attractiveness and one of the most elusively beautiful pieces of art ever committed to canvas.

A key distinction is that many of the contemporary immersive art/gallery/museum exhibits are not adjuncts to a larger exhibition, but the whole of it. One can, hypothetically, enjoy Infinity Mirrors or the Museum of Illusions without taking your phone out of your pocket. With Happy Place, and its predecessor the Museum of Ice Cream, the perfectly puckered and posed photo is the entire point. The souvenir photo has gone from being an index of an experience to the experience itself.

Again, it’s easy to sneer at this. But skipping past the easy smugness, this evolution speaks clearly to a culture that makes a virtue out of phoniness—the same one that vaunts celebrities whose fame-making accomplishments are limited largely to the ongoing and careful curation of their own celebrity (Logan Paul, or the Kardashians, being some of the more obvious examples). It’s a culture in which, as any Instagram user can attest, people indulge outsize amounts of labour to stage-manage a picture of a lazy Sunday lounging around the house. We all participate willingly in such fakery, despite knowing that it’s fake. 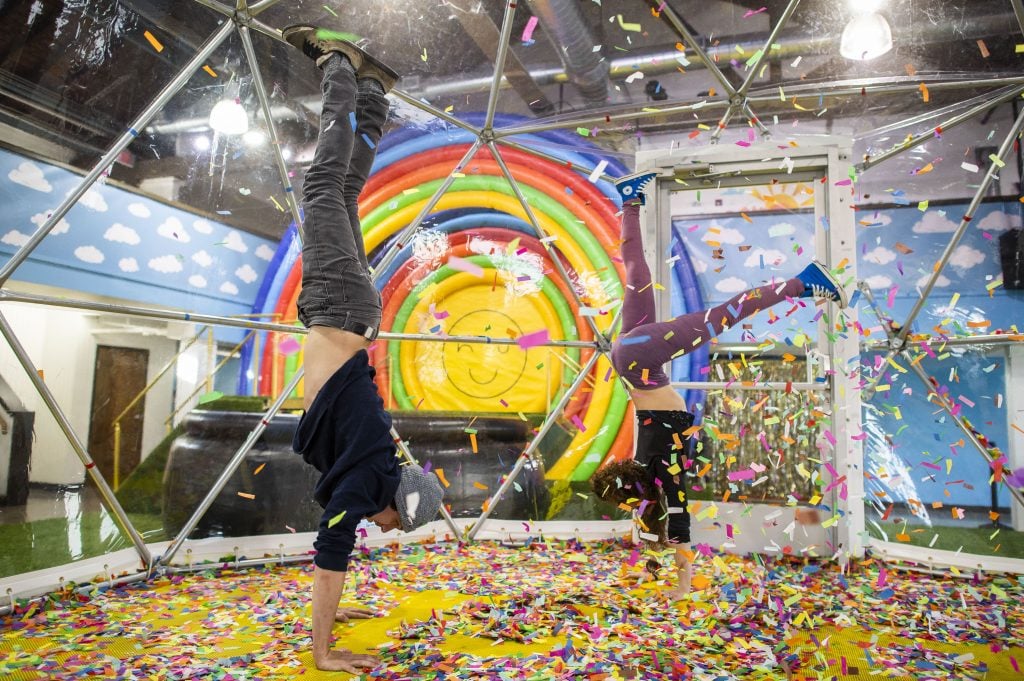 It’s a culture in which the “authentic” has been subjected to justifiable skepticism, to the point where that which announces itself as inauthentic can feel, perversely, more honest. And, it should be noted, even this is not a particularly new or novel resolution to the problem of authenticity. The narrator of Henry James’s 1892 story “The Real Thing” is an illustrator who announces his “innate preference for the represented subject over the real one.” The real is slippery and elusive, where the fake, the representable, is apprehensible. “I liked things that appeared,” says the narrator. “Then one was sure.”

Happy Place is all appearance—of this, literally anyone who passes through it can be sure. Inside, there is a room that smells like cookies, but there are no cookies, except for the very tiny, dry, store-bought Mr. Christie’s that a woman hands out on the other side. That stands as a useful metaphor for the experience of Happy Place, which promises an experience of unselfconscious ecstasy beyond the grimness of reality, and then delivers a deeply self-conscious cheap Insta-bait rip-off version of the same.

READ MORE: The real art at a high-profile Banksy exhibit isn’t the graffiti—it’s the exhibit itself

But that line of blistering appraisal presumes that there’s some authentic Happy Place experience to rip off; that there is, somewhere out there, an actual 7-foot stiletto heel made of candy that is being debauched by this counterfeit representation. This, of course, is not the case. There is no “real thing.” And literally who the hell am I to say that people posing for photos, for which they will receive the likes and hearts and signals of approval that fundamentally animate the whole experience of social media, are any more or less genuinely happy than me, a person who takes genuine pleasure in pretty much nothing? Who can deny the intoxicating power, and bizarre virtue, of fakery?

Still, something nags. It’s not that Happy Place, or similar immersions, aren’t “real” gallery exhibitions, or museum exhibits, or whatever. It’s that their justification—“This is phoney but it announces itself as phoney, and never pretends to anything other than phoney, so please plop into the ball pit of open phoniness”—feels ultimately insufficient. L.A.’s Museum of Jurassic Technology, for instance, is itself also an object lesson in deceit and dissimulation; it is, after all, fake. But it is a very persuasive fake—the sort of fake you want to buy into. It invites visitors to suspend their disbelief, a worthy experience beyond the selfie.

Happy Place suspends nothing—not even its own secret cynicism. The pop-up, per its website’s mission statement, “was created because we BELIEVE that our world today can use a lot more happiness.” It proceeds from a belief that the world is mired in muck and misery, and that any opportunity for even modest happiness should be grabbed like a brass ring. Yet the exhibition does not so much enliven the anguish and languor of modern life so much as extend it. It is, to paraphrase a favourite line from the critic Karl Kraus, a symptom of the disease it purports to cure.

The function of art—and anything purporting to resemble it—is to critique, or at least inflect, the conditions of our existence, not merely reflect it back at us, except gussied up in the one-note style of candy-coloured happiness that this exhibit and others like it purvey. Happy Place knowingly conflates content with contentment. And while there may be no real, authentic, genuine-article oversized stiletto or rubber-ducky room being ripped off and sold back to its visitors, these kinds of exhibits accomplish something even more sinister beneath their bright, jaunty surfaces: They commodify the very experience of happiness itself.