The case for (some) Max Bernier in the commission debates

Stephen Maher: By meeting the organizer's threshold, the PPC leader earned his ticket—but it shouldn't extend to equal air time on our TVs as the frontrunners 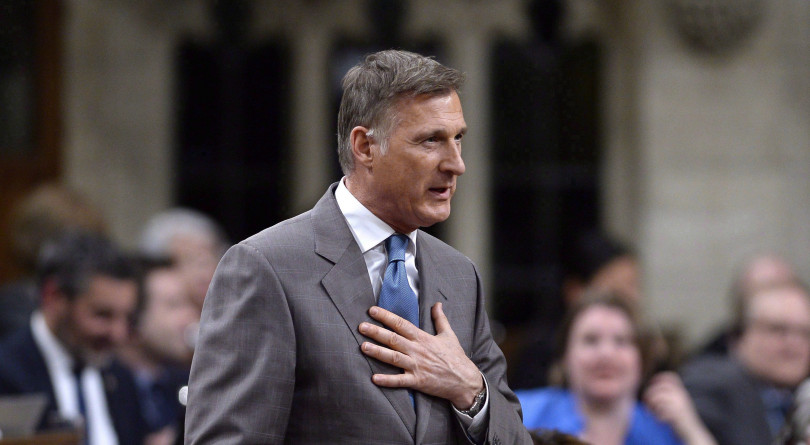 Bernier rises during Question Period in the House of Commons on April 19, 2018 (THE CANADIAN PRESS/Justin Tang)

In 1968, in the first televised Canadian leaders debate, in a long ago era of skinny ties and all-male political events, CBC, CTV and Radio Canada invited the leaders of Canada’s national political parties into the living rooms of the nation to discuss their policies.

For the first hour and 15 minutes, the leaders of the day — Liberal Leader Pierre Trudeau, Progressive Conservative Leader Robert Stanfield and New Democratic Leader Tommy Douglas — sat behind podiums, standing in turn when called upon to politely discuss their policies in a manner that now seems quaintly non-confrontational.

With 45 minutes left, the organizers brought in Réal Caouette, leader of Ralliement Créditiste, a Quebec party with nine seats in the House.

Caouette, whose party has since disappeared, was a social conservative and advocate for quirky theories about monetary policy, occupying a similar position in the political landscape as Maxime Bernier’s Peoples Party does today.

It seems to me that the organizers of that first debate were right to invite Mr. Caouette and also right to give him less time than the other leaders, and the consortium of nine media outlets putting together two debates in this campaign would be wise to consider the precedent.

On Monday, the commission organizing the debates announced that Bernier had met the threshold for inclusion in the debates as established by the government last year.

It is hard to fault commissioner David Johnston, who was appointed governor general by Stephen Harper, for including Bernier.

Since he bolted the Conservatives and set up his own party, Bernier has signed up 40,000 members, recruited candidates across the country, raised significant amounts of money and managed to win a fair amount of media coverage.

Johnston initially ruled that Bernier could not participate. When Bernier objected, Johnston asked for a list of five ridings that the party might win. Johnston hired Ekos to poll those ridings,  and determined that the party is competitive in several of them. (The Ekos polls found that in the ridings surveyed, those who declared a vote for the PPC either possible, likely or certain ranged between 24 and 34 per cent.)

Given all that, it seems Johnston had little chance but to invite Bernier.

The Conservatives and New Democrats objected immediately. NDP Leader Jagmeet Singh said that the commission should not have invited Bernier because “it’s wrong to give Mr. Bernier the platform to spread his hateful and divisive message.”

Although I find Bernier’s positions on immigration and climate change to be bone-headed, the commission is not empowered, not should it be, to weigh the party’s platforms and only approve participants who are proposing ideas that are not hateful or divisive.

The Conservatives instead focussed on a process they think is fixed.

“It’s no big surprise that Justin Trudeau’s hand-picked debate panel used a Liberal-friendly pollster who attacks Andrew Scheer to ultimately justify Mr. Bernier’s attendance at the debate,” the party said in a release. “Trudeau has been stacking the deck for months, using the power of his office to tilt the playing field in his favour for this election.”

This is not accurate. The commission’s advisory panel, which includes Deborah Grey, the first Reform MP elected in Canada, did not make this call. Johnston did, and the Conservatives would face an uphill battle convincing anyone he is a Liberal stooge.

The Conservatives may be forgiven their angry message, though, because they must be terribly disappointed to learn that Scheer’s former rival for the leadership of their party will join the debate, raising his profile among right-leaning voters who have not been paying close attention.

This is potentially disastrous for Scheer, mostly because Bernier seems to have scores to settle with him. Bernier made it clear after his narrow loss to Scheer that he thought some funny things happened when they were counting the votes. His subsequent departure from the CPC and establishment of his own party makes sense if he thinks that the party cheated him out of the leadership.

If he can win five per cent of the votes in ridings across Canada, which will be much likelier if people have seen him in a debate, it gets much harder for the Conservatives to beat the Liberals in this election.

Scheer is in a vice, with Bernier on his right and Trudeau on his left. It does not look like a comfortable position. If he moves too far to the right, Trudeau can warn suburban centrists that he’s extreme. If he moves too far to the centre, Bernier can make a pitch to voters who dislike pride parades and think Canada’s letting in too many Muslims.

But the media, which is already viewed with suspicion by many right-leaning voters, should take care that they are not helping Scheer and Trudeau tighten the vice.

In this election, there are two candidates who might become prime minister: Scheer and Trudeau. At the debates next month, Canadians need to hear from Singh, Bernier, Green Leader Elizabeth May and Bloc Quebecois Leader Yves-François Blanchet, but it is not written anywhere that they deserve as much time on our TVs as the two front runners.