Andrew MacDougall: O’Toole is betting Canadians will first want to walk back to pre-pandemic normal—jobs and security—before running for any kind of imagined future 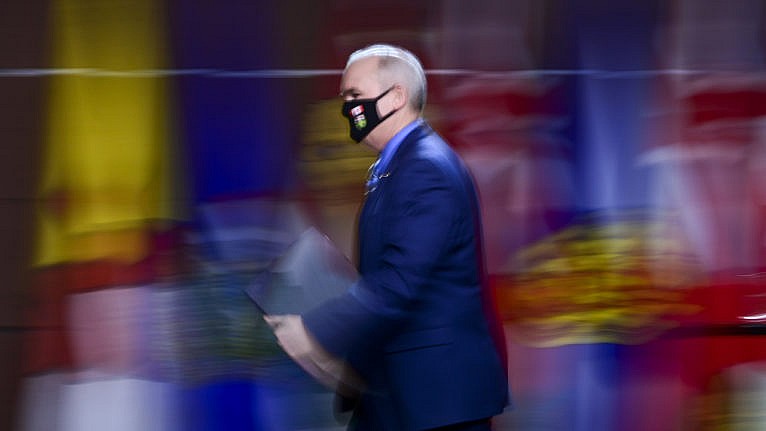 So much of politics is meeting a moment but the hardest task in politics is defining the moment to meet. That was the shape of the task laid out before Conservative leader Erin O’Toole as he addressed his party’s policy convention; how could he frame the debate on important issues in terms that would make voters take a fair-minded look at the new kid on the block?

It’s easier said than done. In the hothouse of partisan politics, it’s easy to forget ‘voters’ includes people beyond the current party voter base. And that goes double for party policy conventions, when the partisan choir sings its standards with a tune most outsiders can’t place. Seen in this light, O’Toole’s frank admission the Conservative Party of Canada “needs to change” is the most important message to filter out of his address. Four leaders in five years has led to an awful lot of narrowcasting and navel-gazing in the Conservative movement, and Canadians have noticed. It was time for Conservatives to notice it too.

Just how the party will change is a conversation for another day; O’Toole’s speech was meant as a signpost that something different would be before voters come voting day, whenever Justin Trudeau decides to push for it. In these narrow terms, O’Toole met his moment: he looked like a boss (and plausible Prime Minister) without sounding exactly like the old boss(es). That O’Toole dropped a five-point plan was the one obvious homage to the past, harkening back to the last time voters took a punt on a relatively unknown Conservative leader with five key priorities in the window.

Now comes the harder work of defining the moment. Here, O’Toole is betting that Canadians will first want to walk back to pre-pandemic normal before running for any kind of future. He believes Canadians—or at least enough of his accessible vote—want to simply get back to work, not invest in a hypothetical future economy in which they may or may not be players.

There are “two paths”, O’Toole warned: Trudeau’s “unfunded, unknown, and untested” changes to a “reimagined” economy, where the “connected few get richer” while “working families get left behind”. And then there is the Conservative path, a recovery plan featuring “security and certainty”, a less glamourous route that will get all Canadians “safely to our destination.”

How you feel about O’Toole’s framing most likely aligns with how comfortable you’ve felt throughout this pandemic. If you’re an urban-dwelling Amazon order junkie who hasn’t taken an economic hit during COVID-19, it likely fell a bit flat. If, on the other hand, you’re the type who drives into the Amazon warehouse sweatshop—sorry, fulfilment centre—it sounds a bit more relatable. As it does for the hundreds of thousands of frontline workers who lost their jobs during this past hellish year. Welcome, ladies and gentlemen, to the Conservative Party as the full-throated defenders of the working class.

Indeed, O’Toole sounded like an old school New Democrat for short stretches of his speech, touting the benefits of manufacturing and strong wages that can support entire families. Even more impressively, it didn’t sound that foreign to O’Toole’s lips, what with him having grown up in GM country. So it appears to be bye bye, free-flowing global free trade; and hello, onshoring, preferably away from those CCP demons in Beijing.

The shape and flows of the future global economy is the one bet O’Toole made on the longer-term future. In the O’Toole worldview, the political stagnation at the heart of many Western democracies will only be solved when the dignity of work returns for those who don’t hold university degrees or live in the centre of bustling towns. Already let down by globalization, these are the people O’Toole fears will be left further behind if the already well-off green economy champions like Justin Trudeau and Mark Carney are the authors of the economic future.

The obvious risk to O’Toole holding this view is that it can sound both anti-climate change and anti-reality. It was noticeable how little O’Toole said about climate change, other than to say he knows it’s a problem that must be addressed. But how will he address it? Will he be making the case to reshore manufacturing jobs by stressing Canada’s higher regulatory standards and the lower footprints of more local supply chains? Or will it be just another flavour of the same environmental weak sauce Conservatives have been peddling in recent elections? It will soon be time to start filling in the details.

Which brings us back to moments. There is a time and a place for big shifts. But is the aftermath of a searing and disruptive pandemic, which itself arrived when inequality was already rife and strong economic growth very rare, really the right time to peddle a massive green transformation? Trudeau clearly thinks the time is right, while O’Toole thinks people want something more basic first. Whoever shapes this pre-post-pandemic moment—near vs. long-term future—will have the better chance of prevailing in the next election.