Marvel Comics is experiencing a wave of anti-diversity, 'Comicsgate' backlash, wielding blacklists and harassment—and it might be working 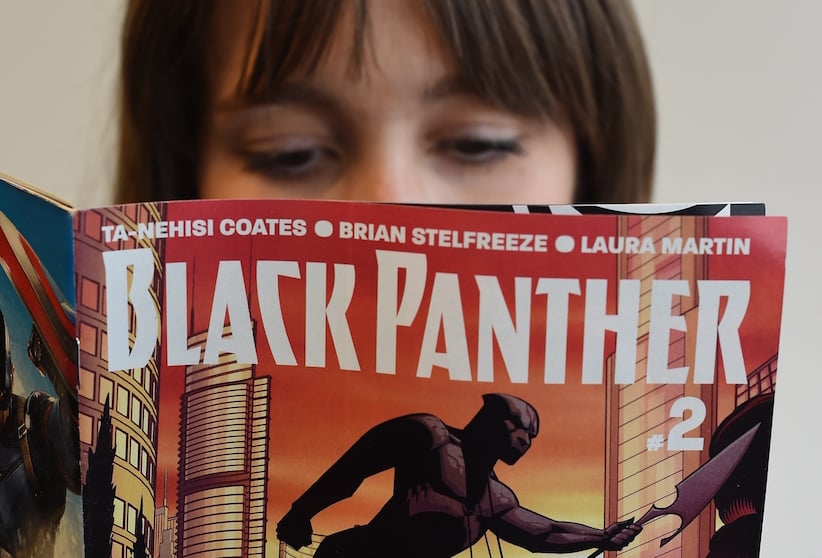 A woman reads a copy of the Black Panther (T’Challa) a fictional superhero appearing in comic book published by Marvel Comics in New York May 17, 2016. (Timothy A. Clary/AFP/Getty Images)

Even as Marvel’s Black Panther shreds box offices and stereotypes on the strength of enormous visibility for people of colour and its progressive politics, the comic book industry that inspired it has come under attack by a reactionary movement waging war on diversity.

It’s been bubbling for years as Marvel has increased racial, sexual and gender representation, from Kamala Khan, a Muslim teen Ms. Marvel, to Miles Morales, a black-Hispanic Spider-Man. The company also passed the mantles of Thor, Hawkeye, Iron Man and Wolverine on to female characters, gave Captain America’s shield to black superhero Sam Wilson, made a Korean-American teen the Hulk, and had Iceman come out as gay. High-profile writers of colour like Ta-Nehisi Coates and Roxane Gay joined Marvel’s roster of creators. In response, Marvel and those creators have faced online harassment. “They are legitimately frightened by harassers who threaten to come and find them at conventions, at stores, at their homes,” wrote comic legend Mark Waid in a Facebook post. “One was told she should be burned to death. Another was told that she should be put down like a dog. And those are examples of some of the less hateful attacks.” Earlier this month, a proposed blacklist of writers and artists made the rounds: “Do not buy comics from these people,” the call-to-arms read. “The only way to fix this industry is to get the cancer out.” Even alt-right provocateur Milo Yiannopoulos has weighed in, with a 2015 rant in Breitbart claiming that “progressive hand-wringing and misandry” are ruining a “cherished art form.”

If this all sounds depressingly familiar, it’s because the world of video games experienced its own roiling storm of anti-diversity vitriol, calling its movement Gamergate. Now Comicsgate—as it’s been dubbed—is trying to Make Comics Great Again. But in the genre’s own history, their argument falls apart.

Social justice has long been at the core of many beloved Marvel works. In 1963, Marvel scribe Stan Lee and artist Jack Kirby co-created the X-Men, using discrimination against mutants as a racism allegory with Professor X and Magneto as philosophical stand-ins for Martin Luther King Jr. and Malcolm X. (Jewish, LGBTQ and other marginalized readers also saw their own struggles in the storylines.) And indeed, in 2008, Lee was awarded the National Medal of Arts partly because “these new stories provided a medium for social commentary” and how his Stan’s Soapbox editorials “[spoke] to the comic book reader about social justice issues such as discrimination, intolerance, and prejudice.”

Kirby also co-created Captain America with writer Joe Simon, debuting in 1940 with an iconic cover featuring Cap punching out Hitler the year after 22,000 American Nazis held a New York rally, but pre-Pearl Harbor. But in exchange for an image that’s now iconic to many comic fans, the pair received threats. “Jack and my grandfather were soon inundated with hate mail and threatening phone calls, all with the same theme: ‘Death to the Jews,’” wrote Simon’s granddaughter Megan Margulies in the Washington Post. Founding figures Simon, Kirby and Lee were all the sons of Jewish immigrants, and many superhero creators at the time were Jewish, due to anti-Semitism in the publishing and advertising industries.

Which brings us to 1966, when Lee and Kirby created Black Panther. Though T’Challa’s initial appearance in Fantastic Four predated the Black Panther Party by a few months, the Wakandan king was political simply by his presence on the page. Comicdom’s first black superhero arrived on newsstands as the civil rights movement, and the according backlash, were reaching angry, new heights.

Lee and Kirby created Black Panther because they wanted more of their readers represented. “I felt we really needed a black superhero,” Lee told me in an interview two years ago. “A good many of our people here in America are not white. You’ve got to recognize that and you’ve got to include them in whatever you do.”

But while initially avoiding overt politics, T’Challa stopped pulling punches by the 1970s. Don McGregor wrote a serialized storyline called “Panther’s Rage” in the unfortunately titled Jungle Action comic that culminated in a 1976 arc where he became a literal social-justice warrior to take on the Ku Klux Klan.

That storyline, and what happened to it, resonates today. In one panel, a hooded Klansman calls black people “supposedly oppressed” while making the MAGA-esque boast: “We will establish a legal movement that will resound with our voices. And once again we will have true representation in our government.” In another, a character describes the KKK’s painfully familiar recruitment techniques: “Hit the middle and lower class whites where they live. They use everything. The recession. Liberalism. I tell ya, [the KKK] even have a great sense of drama. What with their burning crosses. But they try to keep any violence quiet and not traceable back to them. They aren’t overjoyed by bad press.”

Marvel execs were reportedly unhappy. “My response was, ‘Hey, you wanted white people, I gave you white people. There’s no satisfying folks,’ ” McGregor later joked in the intro to his 2010 Marvel Masterworks reprint of his now-legendary run. His bosses, who’d been concerned about his all-black cast, soon cancelled his book.

“Now, some will claim that my writing about the Klan killed the series. That sales then dropped. That may be the case,” McGregor argued. “But if the people hadn’t been so afraid of the subject matter, so hostile to my doing it, if those in charge had gone to the outside media and made them aware of what comics were now handling in terms of subject matter, maybe it would have held sales.” 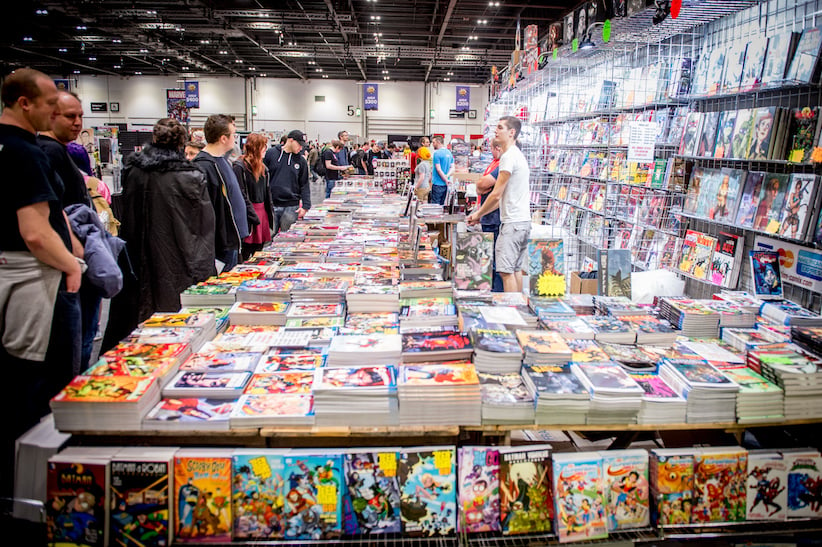 Yet the company is now risking repeating that mistake. Marvel’s monthly issue sales have been declining in recent years—they had only three of 2017’s top-selling issues compared to nine in 2015—though they still dominated the market with 38 per cent of total sales. That said, correlation is not causation; sales dropped among “traditional” titles, too, and the comic book industry as a whole fell 10 per cent from 2016 to 2017. As a result, series have been slashed, and many of the efforts toward increasing diversity have been among the victims, including one for black Netflix star Luke Cage, a female-focused Black Panther spinoff by feminist author Gay, and titles starring queer heroes America Chavez and Iceman.

Now, Marvel is prepping a company-wide relaunch in May dubbed “A Fresh Start,” which looks like a further regression from those steps toward diversity. Tony Stark is returning to his Iron Man armour after spending much of the past year or so in a coma, during which his comic was helmed by protege Riri Williams, a black teenage girl named Ironheart. Bruce Banner, who was killed off in 2016, will be resurrected as the Hulk. And the original Thor Odinson will be retaking his hammer while his cinematic love interest Jane Foster, who’s been wielding it for the past four years while battling cancer, is in the midst of a story arc called “The Death of the Mighty Thor.” As the Guardian put it, Marvel’s back-to-basics reboot is showing “worrying signs of pandering to its most conservative readers.”

Indeed, last year, a Marvel VP said in an interview that “what we heard was that people didn’t want any more diversity,” a statement he later backtracked. Then, at a New York Comic Con event, angry store-owners ranted against “black,” “homo,” and “freaking female” comics. Marvel’s Chief Creative Officer Joe Quesada responded to subsequent criticism by tweeting: “If a comic finds an audience it will stick around regardless of the lead character or creator’s gender, ethnicity, sexual preference or identification. You can claim we’re tone deaf but we published those books but you guys ultimately decide what survives.”

Both quotes hint at the real problem, which is the unique structure of comics sales—and their outsize impact on culture, now that they’re also blockbuster hits—which may make Comicsgate arguably more dangerous than even Gamergate when it comes to reversing much of Marvel’s work to bring change to its offerings. That’s because the industry long ago abandoned newsstands for the “direct market” of comic shops that can’t return unsold product, unlike other book stores. As a result, owners understandably pre-order based on what they think will sell and, because of their traditional white, male demographic, it becomes a self-fulfilling prophecy. We don’t actually know what comic book “unit sales” are—the reported numbers are actually the orders that were shipped to comic shops, not sold by them, and publishers don’t release their digital sales numbers. This makes success determined by store-owner predictions and what their customers ask for, and if potential new and diverse fans aren’t even aware these comics are available, they’ll die on the vine. And so Black Panther and the Crew, a spinoff comic by Coates featuring many of Marvel’s most prominent black characters dealing with the issue of police brutality, was axed after only two issues in shops. Less than a year later, in the wake of the movie’s outsized success, old Black Panther collections make up seven of the top 25 shop re-orders.

Marvel should by all means serve their core, but they shouldn’t let them dictate business decisions that prevent them from expanding beyond it. After all, the monthly-issue market is a far cry from its ‘90s collector-boom heyday; Marvel should be more worried about bringing in non-traditional readers by non-traditional means, be it digital downloads, which reportedly favour female characters, their Netflix-like subscription service Marvel Unlimited, or “trade paperback” collections which are also sold by book retailers and reach a broader readership. In fact, trade sales are dominated by diverse titles; space-opera Saga has led the charts for years while tackling issues like racism and abortion and featuring a prominent trans character. It’s joined by collections of Paper Girls, a sci-fi story starring three newspaper delivery tweens from the 1980s; Monstrous, an Asian-influenced fantasy starring teenage girl Maika Halfwolf; and Wonder Woman, which piggybacked on the popular 2017 film. Meanwhile, Marvel only had a single trade in the 2017 year-end top 30, and that was the 2008 Wolverine story that inspired the movie Logan.

Unlike their publishing arm, Marvel’s movie division is very good at marketing to diverse demographics—their movies have always succeeded by appealing beyond the “traditional” young, white male blockbuster demo. But that became especially true in Black Panther, which achieved its record-breaking opening weekend with a Black audience increase from an average of 15 per cent to 37 per cent. Its female audience also hit 45 per cent, less than Wonder Woman but more than the average of 38 per cent for superhero movies.

Diversity is where growth lies, and it will be how Marvel Comics saves itself long-term—as long as it can be as brave as the heroes in its pages.