The curse of the convoy

Justin Ling: Some Conservatives have been eager to support the truck convoy movement, while also ignoring the obvious ugly elements at work—and it's going to cost them 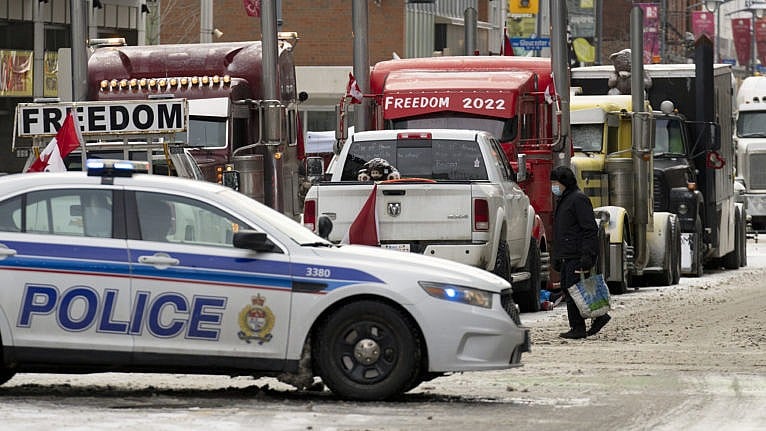 Ever since a column of trucks, campers, and cars set off for Ottawa in January with a song in their hearts and a plan to remove our democratically-elected government, the members of the now-leaderless Conservative Party have been trying to find a way to greet them as liberators.

No matter how many photos of Nazi and Confederate flags have flown in the crowd, or how often the protesters have called for Justin Trudeau to be tried for treason, the Tories have tripped over themselves to find common cause with the occupiers.

Pierre Poilievre, a likely next leader of the party, has taken every opportunity to ingratiate himself with the occupiers, glad-handing with the crowd that wants our government removed from office: “I’m showing up here to support freedom and an end to unnecessary mandates that have no support, no backing by science,” he told some of the protesters Tuesday.

Saskatchewan MP Jeremy Patzer came out and took some photos with organizers Pat King and Chris Barber. One-time leadership contender Leslyn Lewis was ambling through the crowd on Sunday, and was effusive: “It’s been great to see Canadians come together,” she told me. Marilyn Gladu and Candice Bergen, now interim leader, enjoyed some pizza with two of the protesters. Michael Cooper wandered into the crowd on Parliament Hill to express his solidarity with those fighting against having to be vaccinated.

But every foray into the occupied territories of Centretown meant grappling with the fact that a key organizers of the convoy have identified with QAnon and made various disparaging and odious remarks.

Once the video of the Patzer-King meeting emerged, the Saskatchewan MP insisted: “I fully condemn any violent rhetoric on the part of Mr. King or any other participant of the convoy.”

Lewis was positive that “the majority” of the crowd was in Ottawa to protest vaccine mandates, despite having walked past a man wearing a PUREBLOOD sweater. (“Unmasked, unvaxxed, unafraid,” it read) and just as a speaker screamed into the blaring sound system that vaccines were “medical experiments,” to great applause. Nevertheless, Lewis told me, “I am seeing more signs about the mandates.”

Cooper, too, had to explain that he didn’t support the protester who stood behind him proudly displaying an upside-down Canadian flag emblazoned with a swastika.  The Conservative MPs kept insisting that no true trucker would endorse such odious things.

O’Toole himself tried to launder the reputation of the mob: “The convoy is being used by others. So I condemn all those groups,” he said during a press conference last Friday. When I pointed out that it was the organizers, not shadowy agitators, who had endorsed such unpalatable things, O’Toole insisted the organizers didn’t represent the protesters they had convened.

This has been the furious game of Frogger the Conservatives have played all week, desperately trying to cross from one end of the convoy to the other without standing next to a sign marked “vaccines=genocide,” or “Trudeau 4 Gitmo,” appearing underneath one of the many Confederate flags.

This isn’t just injurious to these politicians’ own credibility—an asset in short supply these days—but it’s emboldening this movement.

When powerful people lend these movements credibility, it only entrenches these paranoid delusions. In the closed information environments of the convoy’s Facebook and Telegram channels, there is a whole alternate reality: Where the vaccines don’t work; where COVID-19 is a bioweapon; where Trudeau is set to impose a Chinese-style social credit system. We need to reject that worldview, not explain around it.

Take the contentious question of how big the crowd is: Ex-MP Derek Sloan told the crowd that they numbered in the hundreds of thousands, insisting that it was “the largest gathering ever on Parliament Hill.” The fact that the crowd was almost certainly in the 10,000 range, a modest showing for a demonstration on the Hill, is impossible to get across to this lot.

There is a baseless fallacy that no true protester would fly a Confederate flag. That belief was only endorsed when MP Cathy Waganthall shared a tweet accusing the Prime Minister’s official photographer of being planted in the crowd to photograph a Confederate banner: Proof that it was a real false flag operation. She later deleted the post, because it was nonsense.

It’s fairly clear that these politicians are too concerned about their own political standing, and the upcoming leadership race, to give much of a thought about what their support for this convoy really means.

Some have, seemingly, realized that encouraging protesters to camp downtown indefinitely was a bad idea. MP Michelle Ferreri went from calling the convoy “inspiring” last week to insisting that the Trudeau government needs to develop a plan to clear the protesters: “Will the residents of Ottawa have to listen to air horns indefinitely?” she asked. Quebec MP Pierre-Paul Hus similarly seemed to grow tired of the occupiers by mid-week.

Despite their animosity towards the establishment, this crew desperately wants validation that they are broadly popular. They are tired of being told they are a minority—indeed, I heard at least a dozen people muttering to themselves, incredulous at the Prime Minister’s description of their movement: “Small fringe minority, huh?”

And yet, that’s exactly what they are: Nearly 90 per cent of eligible Canadians have gotten at least one dose of the vaccine. That 10 per cent who remain unvaccinated are predominantly hesitant, not hostile, to the vaccines. Which makes this anti-vaccine crowd the fringes of the minority.

Even a vaguely-worded question from Abacus Data found that only about a third of respondents said they had a lot “in common” with the protesters.

Of course the organizers have insisted they are not anti-vaccine, only anti-vaccine mandate. But that’s not very convincing. Several of the groups participating in the event are responsible for peddling junk science which claims the vaccines are deadly. One of the participating groups, Action4Canada — a group which argues that COVID-19 public health measures are “egregious crimes against the citizens of this nation” and that every politician who supported them must “pay for their crimes.”

Even if we accept that the calls of “freedom,” which have been barely audible over the honking, are about the mandates themselves, that still leaves this crowd in the margins: According to an Ipsos poll, more than 80 per cent of the country supports mandatory vaccines for a litany of jobs and upwards of 70 per cent support vaccine passports.

Wander through the crowd and it’s clear pretty quickly that the protesters are, at best, a cross-section of those who supported Maxime Bernier’s People Party.

Some signs showed Trudeau’s strings being pulled by a demonic (and anti-Semitic) caricature of George Soros. There were hundreds of anti-vaccine signs. Speakers on stage repeatedly questioned the safety and efficacy of the vaccines. Masks have been eschewed by the vast majority of the protesters. Attendees were proselytizing about the, debunked, efficacy of antiparasitic drug Ivermectin. When one speaker asked the crowd to cheer if they were double-vaccinated, nary a peep was heard. (One protester gingerly raised their hand, before quickly putting it back down.)

The warnings of a slippery slope towards autocracy haven’t found much purchase in Canadians who aren’t terribly put off by showing their proof-of-vaccine before grabbing a pint or seeing a movie. And the bleating about the imposition on the unvaccinated’s civil liberties hasn’t found much sympathy in a population who see anti-vaxxers as a risk to our creaking health-care system and a main reason for the constant lockdowns and restrictions.

Certainly, it is everyone’s right to avoid the shot. But sometimes exercising your rights means accepting the consequences. And, indeed, consequences are exactly the point of these mandates, even if they are really quite mild. You may lose your job hauling goods if you refuse to get vaccinated, sure: You would also lose your job if you refused to renew your drivers’ license.

Taking responsibility for their actions isn’t something the crowd wants to do. They want the rest of us to accommodate them. Which is why it’s particularly absurd to hear Poilievre hector the media to not ascribe the racist and conspiratorial symbols on full display to the rest of the crowd — those flying the Confederate flags “should be individually responsible for the things they say and do,” he said.

The Conservatives know this is wrong. But the pretenders to O’Toole’s still-warm throne desperately want to sway those 850,000 voters who lined up behind Bernier last September.

While Ipsos found that two-thirds of Conservatives supported the passports, some 90 per cent of People’s Party voters opposed them. (Albeit with a small sample of Bernier supporters.)

There is certainly a way to harness the raw populist energy of groups like this — look no further to Donald Trump’s masterful, if cravenly self-interested and dangerous, wrangling of the QAnon movement. With a few well-orchestrated winks and nudges, he won the fealty of hundreds of thousands, if not millions, of conspiracy theorists without too much blowback from his broader base. And, no wonder, Trump had already inoculated his supporters against any bad words from the media. Any wrongdoing, like those who stormed the capital, could be blamed on Antifa. Because no true MAGA supporter would commit acts of violence.

Conservative politicians in this country drool at the idea of commanding such a broad base of supporters who have enveloped themselves in a cocoon of misinformation. Also: The convoy has raised $10 million.

Putting aside the obvious dangers to our democracy, this is destined to blow up in their face. Canada isn’t the United States, the Conservative Party is not the GOP, and Pierre Poilievre is no Donald Trump.

Canadians have proved incredibly prickly about being recruited into the culture wars. They have shown no love to politicians who have found common cause with anti-vaxxers and white supremacists, and they have rolled their eyes at efforts to explain around the particularly odious figures.

Poilievre may well win the battle to take over the Conservative Party, and lead his party to another failure against Trudeau—who, for his many faults, still represents where most of the country is at on the pandemic.

There is another way.

There is tremendous room for some Conservative to use this ongoing honk-fest as an opportunity to stop the furtive attempt to explain that no true conservative would desecrate the National War Memorial. They could stop coddling this convoy, twisting themselves into knots to be both pro-vaccine and anti-mandate, in order to play for Bernier’s anti-government base.

Given protesters are heading to Victoria, Toronto and Quebec City in the coming days, the great honkening is only going to get worse. The Conservatives don’t even need to condemn and admonish the protesters per se: It is their right to hold a peaceful demonstration in Ottawa, even if it is annoying and inconvenient. But they should plead with these people to go home. (Unfortunately, new interim leader Candice Bergen has advocated against that, in order to own the Libs.)

But it is high time that an adult vies to lead the Conservative Party by refusing to make common cause with the rump of the country that has become deranged in their opposition to Trudeau and the vaccines. A politician who can simultaneously oppose the ham-fisted lockdowns, travel restrictions, and curfews while simultaneously offering a clear message on vaccines and masks as effective tools to get us out of this mess.

Freedom, yes, but for everyone: Not just the unvaccinated.