Opinion: Amid allegations of a cover-up in the alleged assault of a teen, the police's request for trust is hard to take 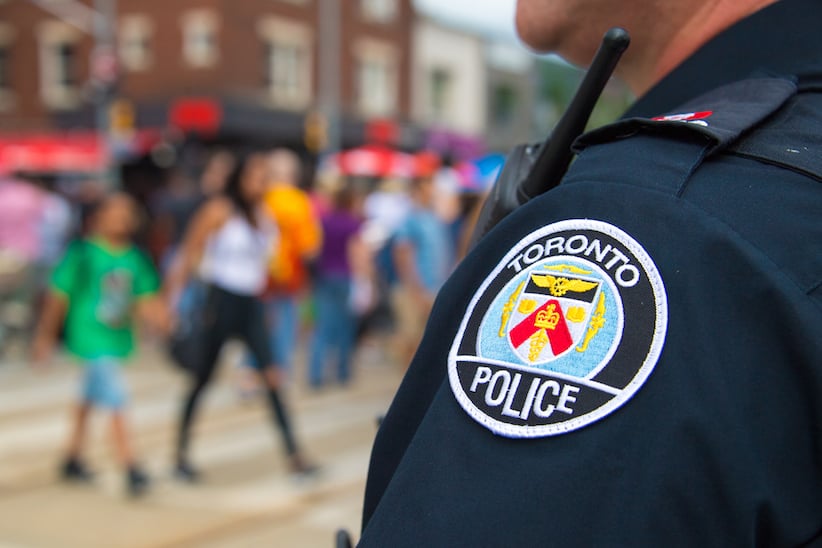 A Toronto Police officer is seen here in 2016. (Shutterstock)

Last week, Toronto police chief Mark Saunders and Mayor John Tory publicly addressed rumours of a police cover-up in the case of Dafonte Miller, a Black teen allegedly beaten by an off-duty police officer and his brother in December of 2016 in Whitby, Ont.; the assault, which was so bad that one of Miller’s eyes will have to be removed, was only investigated four months later. Saunders defended the Toronto Police Service’s handling of the case, claiming that the Special Investigations Unit (SIU), which has since charged the Theriault brothers with aggravated assault, assault with a weapon, and public mischief, worked with the information it had at the time. Meanwhile, Tory reassured Torontonians that he had no reason to doubt the integrity of the Waterloo Police Force officials who will be conducting an investigation into the case.

In short, both Tory and Saunders are asking for trust—and specifically, they’re asking you to ignore the abundance of evidence indicating that policing in Toronto is a broken system. But from interactions on the street to civilian-oversight responses to confrontations in public board rooms, asking for trust is simply an unreasonable request.

Trust is the core of every police force’s relationship with its community. “The ability of the Toronto Police Service to keep Toronto the best and safest place to be has always depended on the trust and support of the people we serve,” wrote Saunders in a January report about modernizing policing in Toronto. “I am committed to this approach as we move forward with implementation, ensuring that transparency, inclusiveness, and community partnerships remain central to everything we do.” For the police, public trust is not merely a matter of optics; information gathering, eyewitness testimony, and other forms of public cooperation all rely on perceptions of trust. A 2015 federal report, Public Confidence in Canadian Institutions, noted that the majority of Canadians held a high degree of confidence in the police and thought that the police were doing a “good job” of interpersonal tasks such as being easy to talk to, treating citizens fairly, responding to calls, and enforcing laws. The survey also noted, however, that Indigenous populations, racialized populations, and Canadians who had reported having contact with the police within the last twelve months gave the police lower marks in these fields.

Given these results, it is not difficult to see why policing in Canada is such a polarizing issue: the views of a majority that holds more confidence in policing than any other institution in Canada, but has had little to no interaction with the police, are often routinely prioritized above the experiences of those most directly affected by the police. When the police ask for public trust, they are asking citizens to reinforce a system of inequality; they are requesting an act that requires an impossible suspension of disbelief from the lived realities of marginalized populations.

After all, history does not look favourably upon the Toronto Police Service. Earlier this year, the Toronto Star reported on police violations of their legal obligation to the SIU. The violations emerged from more than 150 letters sent from the director of the SIU to the chief of police which noted, as the Star reported, that there were “repeated complaints of officers waiting weeks, months, or in one case, nearly four years before reporting serious injuries suffered by members of the public during police interactions.” These problems persist in 2017 despite reports in 2008 and 2011 from André Marin, then Ontario’s ombudsman, calling for “greater independence, rigour, and integrity” in SIU investigations. “It is long past due for the SIU to be provided with the necessary powers and authority to carry out its mandate effectively, credibly and transparently,” he said. Years later, cases such as Dafonte Miller’s leave Ontarians wanting. Howard Morton, the former director of the SIU, has said that the force is now behind the eight-ball with the Miller case: “I don’t think this will be a true investigation and even if it is, the public’s perception will be that it is not,” he told the Star. Even the fact that some believe an institutional cover-up occurred is proof of that diminished confidence.

There is also the problem of leadership within the Toronto Police Service. Saunders is part of a long lineage of police administrators that have remained unresponsive to the hundreds of recommendations proposed by investigators in light of discrimination in policing. Police administrators in Toronto have not only proven unresponsive to allegations of discrimination, but also even incapable of acknowledging its existence. During the G20 protests—which left many peaceful protesters injured by police—Mike McCormack, the head of the Toronto Police Association, claimed that allegations of a culture of silence that served to protect the offending officers were “absolutely absurd.” As CBC reported, the SIU found that “no police were criminally responsible, in part because 11 officers who witnessed the incident couldn’t identify those who allegedly inflicted the injuries.” In 2003, then-chief Julian Fantino denied the existence of systemic racism in the TPS. “Recent controversy has served to remind everyone of the fragile nature of this relationship and how potentially divisive allegations of racial bias can be. Unfortunately, even the perception of such bias has put in question the relationship between some segments of society and the police,” Fantino wrote in the foreword of a 2003 TPS report. “Nevertheless, I remain steadfastly confident that systemic racism does not exist within the Toronto Police Service.”

But Saunders’s failure to concede that misconduct is a possibility in the Miller case flies in the face of more than 40 years of research. In 1976, Donald Raymond Morand identified this culture, popularly referred to as the “blue code” or the “blue wall of silence,” in his Report of the Royal Commission into Metropolitan Toronto Police Practices. Morand, who was sympathetic to the intense responsibilities and expectations carried by the modern policeman, wrote that “when excessive force is used, it is all too easy and tempting to lie to a superior officer and thus escape penalty. When the case comes to court, it then becomes necessary for the officer to commit perjury, to continue the denial which he has already made to his superior officers.” It’s the kind of workplace culture that can reinforce discriminatory practices, and for those who have faced police harassment and brutality, leadership that refuses to acknowledge this culture exists is akin to watching a child who, covering his eyes during a game of hide-and-seek, believes he cannot be seen. It is a failed effort to distort a reality plainly visible to those in the vicinity.

While the SIU is tasked with holding police accountable for use of force, the Toronto Police Services Board (TPSB) uses its mandate “to establish, after consultation with the Chief of Police, overall objectives and priorities for the provision of police services.” But at a TPSB meeting on Jul. 27, police subjected attendees to unwarranted searches prior to gaining entrance to the meeting, a seeming response to a Jun. 15 meeting that stretched nine hours and saw more than 60 community members register to depute the highly contentious School Resource Officer Program. At that meeting, police withheld seats from select attendees and used their bikes to form a blockade to prevent the overflow from entering the meeting room. Rather than meeting the recent increase in scrutiny and public pressure with transparency, the TPSB has added to a growing list of barriers to public engagement, including poor time management of meeting, unwarranted searches, holding a public meeting about police in the police headquarters and, most notably, arresting activist Desmond Cole, who wanted to speak to the Miller case though it had been left off the TPSB meeting agenda. These gestures, like the leadership that compelled them, only further sap the trust that police say they need.

The image of Cole walking, handcuffed and flanked by officers, clearly illustrates why it is so hard for the public to trust the police. Rather than viewing trust as a matter of equity, the police seek it as part of a business-like calculus tied to information-gathering and surveillance; it feels like an instrument in their hands, rather than a guiding principle. The Toronto Police Service’s problems are deep-seated ones, a thread that, once pulled, could consume the entire garment. Rather than acknowledging and addressing the deep inequalities that created the Miller situation and taking action, the mayor and chief of police denied wrongdoing and asked for trust. That’s a leap of faith over a chasm that’s too wide for many communities to jump.