The de facto veto on building pipelines in Canada

Peter Shawn Taylor: The courts say there is no Indigenous 'veto' over resource projects, but on Trans Mountain it has effectively happened 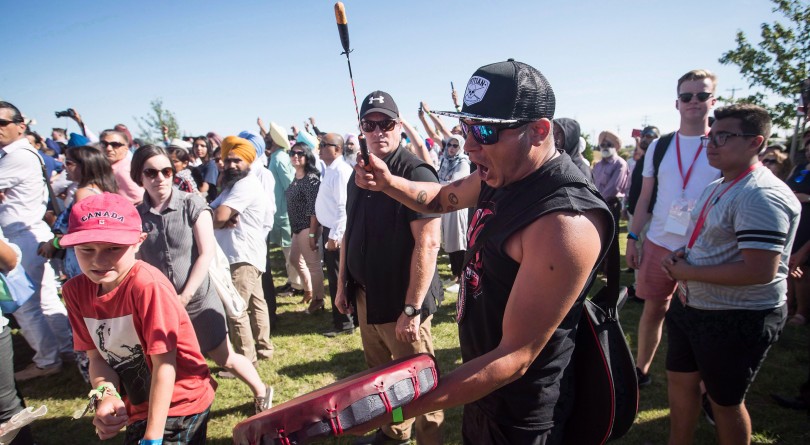 A member of the Tsleil-Waututh First Nation sings in protest as Prime Minister Justin Trudeau speaks at a barbecue in Delta, B.C., on Sunday Aug. 5, 2018. (THE CANADIAN PRESS/Darryl Dyck)

Amid the confusion over last week’s Trans Mountain court ruling, let’s begin with what we know for sure about the federal government’s “duty to consult” with Indigenous groups.

“This process does not give Aboriginal groups a veto over what can be done,” states the 2004 Supreme Court ruling that originally established the concept of a duty to consult.

Since then, similar declarations have been inserted into every significant ruling on this matter. Last year, for example, the Supreme Court noted “the duty to consult does not provide Indigenous groups with a ‘veto’ over final Crown decisions.”

Last week’s decision from the Federal Court of Appeal says the same thing. “The consultation process does not give Indigenous groups a veto over what can be done.” It also adds that “Canada is not to be held to a standard of perfection in fulfilling its duty to consult.”

Got that? No veto. Perfection not required.

And yet we must square this judicial claim with the troubling sense, expressed most succinctly last week by Alberta Premier Rachel Notley, that “the current state of affairs in Canada is such that building a pipeline to tidewater is practically impossible.”

There’s no veto, the courts keep saying. But the practical evidence on the ground suggests the system has become an impossibility. Has the approval process itself become a veto?

In the past two years, two major pipeline projects, each backed by a different federal government, have come a cropper in the courts over an apparent failure to properly consult with affected Aboriginal groups.

Approval of the Northern Gateway pipeline, provided by the Harper government in 2014, was quashed by the courts in 2016. This despite a multi-stage consultation process that placed 209 conditions on the project. Eighty per cent of the Indigenous population along the path of the pipeline lent their support to the project after negotiating impact benefit agreements. However, a few mostly coastal First Nations opposed the pipeline and successfully claimed they’d been insufficiently consulted.

The Trudeau government was fully alive to Northern Gateway’s problems when it revamped the consultation process for Trans Mountain. Initial National Energy Board approval involved 157 conditions. The government then tripled the amount of money offered to Indigenous groups to participate in the remaining consultation process. It also added a new phase of consultations in between the NEB ruling and cabinet approval to facilitate additional negotiations on outstanding issues. Finally, it extended the timeline for that phase to allow for further meetings.

Despite all the new pathways for consultations, however, the court ruled it wasn’t sufficient to fulfill the Crown’s duty. In particular, the affected parties deserved more face-time with actual “decision-makers” in Ottawa rather than simply having their concerns jotted down by government employees who passed them along to their bosses. This specific requirement of cabinet-level face-time is no where to be found in the earlier Northern Gateway decision. And it seems rather impractical, given the sheer number of groups involved and the limited number of actual decision-makers in Ottawa. How is any government supposed to do a proper job of consulting when the rules keep changing?

“The courts have explicitly stated that consultation does not entail a veto,” observes Malcolm Lavoie, a law professor at the University of Alberta and author of a recent legal note on the issue released by the Fraser Institute. “On the other hand, the way the law functions on the ground can amount to a de facto veto. And that’s becoming most clear in the context of pipelines.”

For Lavoie, the problem isn’t so much the evolving notion of the duty to consult as the scale involved with large, multi-faceted projects such as a pipeline.

When the duty to consult first appeared on the legal landscape in 2004, the initial case turned on a British Columbia First Nation’s complaint about a particular logging lease. Another early case involved an old mining road. In these situations, Lavoie points, it’s a rather straightforward process to determine whether there’s been sufficient consultation and if both parties have been acting in good faith.

“On issues that only affect a single Indigenous groups and a single issue like a mine or a road, you can sit down and have a meaningful back-and-forth dialogue and then come to a resolution or determination,” he says. But what works well when the stakes are limited doesn’t necessarily function properly when scaled up exponentially.

Trans Mountain involves 133 Indigenous communities and groups with highly disparate objectives spread over a huge landscape. Some parties are eager to participate and have signed impact-benefit agreements. Others have legitimate environmental or cultural issues that needed to be resolved. And some groups may simply want to frustrate the entire process. “”It seems like the courts are under-estimating the difficulties and challenges involved in reaching agreements in these situations,” says Lavoie.

Scale raises the possibility that some groups will engage in strategic game playing or deliberately frustrate the system. Sometimes all that is required to kill a project is to play a drawn-out waiting game and legal uncertainty. Had Trans Mountain not been owned by the federal government, the recent court ruling would almost certainly have been its death blow. Consider it veto by delay.

The Northern Gateway and Trans Mountain court rulings ignore this crucial issue of scale. They take a process created for settling disputes over old mining roads and apply it to a massively complex cross-country pipeline. The Trans Mountain decision, for example, rather naively claims the issues left to be resolved through further consultation are no big deal. “The concerns of the Indigenous applicants were quite specific and focussed and thus quite easy to discuss, grapple with and respond to,” the judges write. “The end result may be a short delay.”

Yet among the chief complaints of the coastal Tsleil-Waututh Nation is the risk posed by a potential marine oil spill. The federal government considers the likelihood to be extremely low and points to a panoply of mitigation and prevention measures. The Tsleil-Waututh, however, appear determined to avoid this risk altogether. It seems unlikely such a sharp divergence in opinion can ever be bridged, regardless of how much discussion, grappling and negotiation goes on.

The courts’ unspoken objective–despite repeated claims to the contrary–seems to be that all fractious discussions ought to end in a negotiated settlement. Getting everyone to agree is certainly a nice sentiment, but in situations involving large numbers of players with competing interests and objectives spread over a huge area, that seems well nigh impossible. And absent universal agreement, a duty to consult becomes an Indigenous veto in all but name.

The prime minister recently said he intends to follow through on the court’s demands and go back to consulting with affected Indigenous groups, rather than trying to solve the situation with a “legislative trick.” He’s going to play the game out as the courts dictate. But at the end of the day, approval of a pipeline that requires coastal access will necessarily mean disappointing groups that never want such a thing to happen. And no amount of consulting is ever going to change that.

Then we’ll finally find out if the courts really mean it when they say there’s no such thing as a veto on pipelines.