The Elizabeth May show and the first leaders debate

Stephen Maher: While Scheer hit a wall with his climate plan and Singh came up short on policy detail, the Green leader, an experienced debater, took over 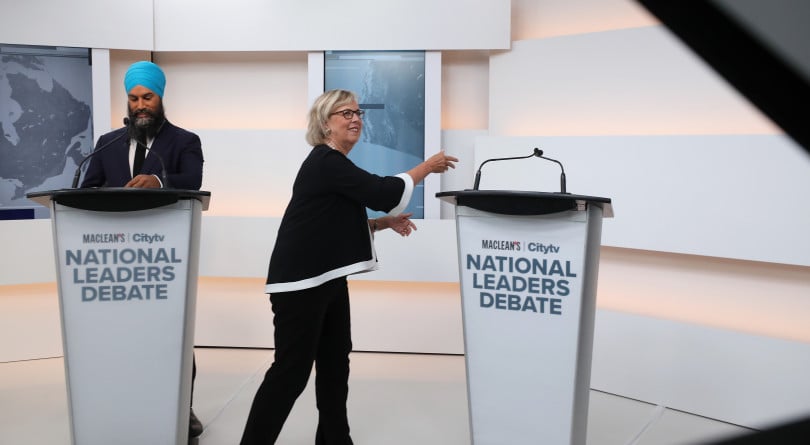 Elizabeth May went into last night’s debate looking like she was in trouble.

May has been leader of the Green Party since 2006, but until this year she has always served as a lone voice for an environmental view of the world far from the mainstream of Canadian politics, more of an activist than a politician.

But in the past year, as Jagmeet Singh struggled as leader of the NDP, and Canadians became more concerned about climate change, May’s party started to move up in the polls. It appeared that a big chunk of the electorate—traditional NDP supporters in small towns—were turning Green.

This put pressure on May, who had been running a one-woman show for more than a decade, to get ready for the big time heading into this election. It was not clear that she would be ready for a brighter spotlight.

To prepare herself for the more cutthroat world, she hired Warren Kinsella, a long time Liberal war room guy with a reputation for going for the jugular, then, when grass roots Greens complained, unhired him. When some New Democrats in New Brunswick announced that they were switching to the Greens, angry New Democrats complained bitterly that one of the party switchers linked the move to Singh’s race and May had to go out and disavow the comments.

Then she struggled to explain that while the party would not whip votes on abortion, pro-life candidates were not welcome, doing the kind of slow-motion damage control that keeps a bad story going for longer than necessary, giving New Democrats another target.

Then another refugee from the NDP, Montreal-area MP Pierre Nantel, who is running for the Greens in his riding on the South Shore of Montreal, gave an interview to Radio Canada in which he said that he would vote to separate if given the chance. A Green spokeswoman said that is fine, since the territorial integrity of Canada isn’t a core concept for the Greens, a clear, if somewhat surprising, position for a Canadian political party.

Then, when asked at her campaign launch, May said it wasn’t true. “He is not a separatist; he’s a strong Quebecer within the context of Canada.”

Nantel then gave another interview, in which he explicitly stated that he is one. “Of course I’m a sovereignist, everyone knows, and that’s always been the case.”

So, two days into the campaign, at the first debate, Thursday night in Toronto, May looked like a soft target for Singh, who needs to assert himself as the obvious flag bearer for left-leaning Canadians if he is to avoid disaster when we go to the polls.

It was an odd debate, in a way, because the Prime Minister, who had pressing business doing a town hall with supporters in Edmonton, did not attend. May and Singh flanked Conservative Leader Andrew Scheer, with Trudeau’s empty podium at the end of the stage. It was the first debate at this level for Singh, and for Scheer, who has a reasonable chance of winning the election.

Absent a knockout punch, it is always difficult to know how to score these things, because what matters is whether the leaders persuade voters to support them, either during the debate, or more often, through the media coverage of the debate, which takes time to settle in.

Singh, for instance, had an opportunity to introduce himself to tuned-out younger voters who have not been paying attention until recently, and may be pleasantly surprised by his message and his youthful exuberance.

Scheer, speaking calmly, directly to the camera, much like Stephen Harper used to do, sought to appear prime ministerial, delivering a pro-resource-extraction, anti-tax message that had to please his supporters.

I thought May won the night, though, because she is a more experienced, better debater, with a surer grasp of policy minutiae than her opponents, which makes her hard to attack. She found ways to dominate the discussion, holding the floor while the other two listened, and at times seemed to almost be trying to moderate the event herself.

She is quirky, though. She mimed shaking hands with an absent Trudeau at the start of the night, and argued strenuously that SNC-Lavalin should be forced to build infrastructure on first nations to pay for its alleged sins, which, legally speaking, seems problematic, to put it mildly.

But she rebuffed Singh forcefully when he called her proposal “ludicrous,” and seemed to win the exchange although Singh is right.

Singh, who has not been playing at this level for long, could not match her for policy details,  and often unspooled values statements and little stories about people he had met who were struggling because of some hard-hearted policy.

Scheer looked resolute, politely but firmly insisting on the necessity of natural resource projects in exchange after exchange, which would surely please his supporters in resource-extracting ridings but might not do much in the suburban ridings he needs to win.

I find Scheer’s job pitching his climate policies hard to evaluate because his plan provides no mechanism for reducing carbon emissions, with a carbon tax or cap-and-trade system, instead promising a technology fund, which, so far as I can tell, would not discourage anyone from increasing emissions.o

He said, for instance, that we could do more good exporting Canadian carbon-capture technology to China than reducing our emissions, which sounds good unless you are aware that our carbon capture technology is more a wish than a technology, a non-cost-effective R & D project. And even if it were to work, why would any company use it, if they can just increase emissions?

Scheer has wedded himself firmly to a climate non-plan that appears to have been written by the Canadian Association of Petroleum Producers at a time when Canadians are increasingly worried about the climate. That may make some Conservative ridings safer but does not seem likely to appeal to people in the ridings he needs to win.

If that is the way he campaigns, he seems likely to preside over a stable but static coalition, in which case all the action will take place on the left, with the voters that pollster Frank Graves calls “promiscuous progressives,” who may vote Green, NDP or Liberal, but would never vote Conservative.

In the first debate, May put on a pretty good show for those voters.