The end of the NDP

Andrew MacDougall: By facilitating Justin Trudeau’s shutdown of Parliament, the NDP has written itself out of relevance. It could have done so much more. 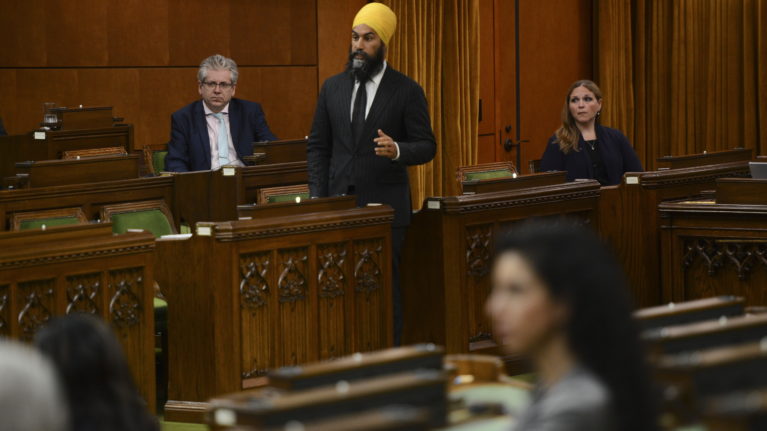 Singh speaks during the COVID-19 Pandemic Committee in the House of Commons on May 27, 2020 (Sean Kilpatrick/CP)

Now, I don’t know if NDP leader Jagmeet Singh ever played baseball while growing up in suburban Scarborough, Ont. Or, for that matter, if he watched the film ‘Old Yeller’ on the telly with his folks.

So listen up, Mr. Singh, for what I’m about to say will undoubtedly hurt: it’s time for your defective NDP to be put down on account of the mercy rule. There is simply no chance the NDP will ever get back in the game called Canadian democracy.

Don’t take it from me, take it from Singh and the NDP, who this week wrote themselves out of relevance by facilitating Justin Trudeau’s shutdown of Parliament until sometime in September, by which point the Canadian economy will be doing a stellar impersonation of the NDP balance sheet. At a time of global peril, Singh put his staycation ahead of responsible government.

NDP supporters will undoubtedly interject here to say they secured the support of the government for a pledge to work with the provinces toward a new national system of 10 days of paid sick leave in return for their surrender. Put differently, at a time when Trudeau is a walking talking ATM dispensing tens of billions of dollars to all and sundry all Singh could manage was an IOU. Sorry, a contingent IOU. Memo to self: invite Singh to the next quarantine poker night.

Watching the NDP leader take questions in the wake of his bamboozling was even worse. Trudeau is hiding behind “jurisdiction” on the question of care homes, Singh thundered as he threw a blanket over Parliament. “We have many tools to push the government,” Singh argued to reporters, perhaps not realizing he had just thrown away his best and most effective tool. Quick, somebody explain ‘balance of power’ to the man who should be bending Justin Trudeau over a barrel, not vice versa.

It’s perhaps a blessing for the squeamish that the NDP also agreed to shut down debate on the question of shutting down Parliament. If you’re going to comprehensively wet the bed it helps to narrow the window in which you can be observed doing it.

READ MORE: Stephen Harper vs. the Media, round infinity plus two

Because God knows we don’t need Parliament at this time of absolutely nothing happening.

Then again, ‘nothing happening’ is pretty much the default state of Canada’s Parliament these days. As my former colleague Garry Keller noted on Twitter, the House of Commons has sat for a grand total of 44 days since June 2019, a tally that would have seen a Stephen Harper-led government flambéed by the Parliamentary Press Gallery. Well done, NDP.

It’s hard to believe the party that stormed to the role of Official Opposition in 2011 is already on death’s door, but such is the NDP’s tale of woe since that time.

First came the untimely death of former leader Jack Layton, followed by the elevation of former Quebec Liberal Thomas Mulcair, whose bold decision to pursue balanced budgets as election policy was quickly and devastatingly caught out by Trudeau’s decision to tack left and spend, spend, spend. With Muclair gone and Singh a nullity, the NDP have now slipped into irrelevance, and soon possibly bankruptcy, such is the current strain on party coffers.

And so it’s time for the NDP to go, if not with a bang, then with a whimper. Trudeau’s big-spending, decidedly left-of-centre government has left the NDP nowhere to draw oxygen. It simply isn’t possible for a government to be spending more than this government already is, and with Trudeau’s brand already hogging the environment, there are no totemic issues of which to grab hold.

Who knows, the exit of the NDP might even have a positive effect on the Conservative Party. With no party coming to split the left, the Conservatives would be forced into a more rounded conversation on policy. As things stand, it’s a majority or bust for the Conservatives, and right now there are nowhere near enough Canadians under the blue tent to form government. Better to withdraw the fantasy of NDP splits in suburban ridings than to hope for an improbable repeat of the 2011 majority result.

The death of the NDP is a sad thing, yes, but necessary. The pacifist, crunchy granola-ism of Svend Robinson and trade-unionism of Ed Broadbent are relics of another time. The new power on the left resides in identity politics, not economics, another market Trudeau has cornered.

All that’s left for the NDP to do is to be true to itself. The NDP platform endorsed physician-assisted death; now it’s time to deliver on one last pledge.