The end of the reality TV presidency

Adnan R. Khan: The storming of the Capitol by Trump's clownish supporters was a fitting end to the Trump era. But the gravest threat to America lives on. 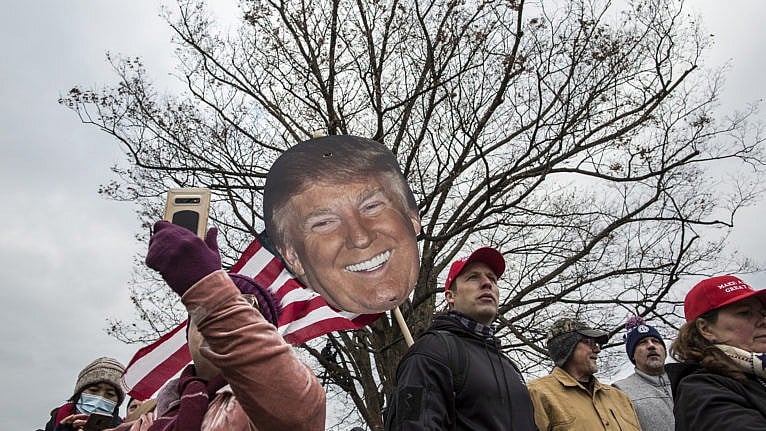 Let’s put the theatrics aside: American democracy did not come under threat on Jan. 6 any more than it has been under threat during the entirety of the Trump presidency. There was never a danger of a coup. The rioters and looters who stormed the Capitol while a joint session of Congress was rubber stamping the 2020 election results were, frankly, a joke, a motley collection of conspiracy theorist whack jobs and white supremacists in Viking cosplay.

Many were violent and dangerous, to be sure. A police officer was killed and many others could easily have died. The few who did appear to be dressed and ready for some kind of insurrection or hostage-taking—those decked out in body armour and armed with handguns or tasers—were scattered and unorganized. Their getup was little more than theatre (indeed, one of them reportedly died after accidentally tasing himself and suffering a heart attack; another reportedly stormed the capitol with his 56-year-old mother).

I’ve met these types over the last year of living in the U.S. They scream and shout and threaten but, in the end, they are toothless wannabes who think they’ve found their historical moment to be somebody. Many were deluded enough to see themselves as revolutionaries, but let’s face it, they were an embarrassment to actual revolutionaries everywhere.

READ: Canada is not immune to Trumpism

What is worrying is that some Americans are now acting as if this farce represents some kind of defining moment: America, in its infinite exceptionalism, once again overcame imminent disaster. In typical American hyperbolic fashion (and in the words of the now outgoing Senate majority leader Mitch McConnell), seditionists tried to “disrupt” American democracy, and “they failed.” Others have gone full-tilt Alex Jones, calling what happened on Capitol Hill an “insurrection” and a “failed coup attempt.”

I’ve witnessed insurrections and coup attempts firsthand and that is not what happened in Washington. What actually happened is that a deranged president, backed by sycophants and a corrupt right-wing media army, convinced thousands of people—mostly white men—to march on the Capitol and…what? Take it by force? Overturn the election? It’s not entirely clear, or, in any sane analysis, realistic.

That’s what makes this entire sorry incident so fundamentally unserious: The four years of the Trump presidency has been one long, rudderless mess, culminating in a virtual non-response to a devastating pandemic and an incoherent, screaming mob on Capitol Hill.

That’s not to say Americans shouldn’t be worried. What happened on Jan. 6 was indeed a worrisome by-product of the rot in American democracy. It was the outcome of tens of millions of Americans voting for a man who has never demonstrated even the hint of ability to do the job of president and instead has vividly demonstrated his talent for chaos and disorder. Four people are now dead directly because of that mystifying decision; and nearly 400,000 people have died, at least in part, because it.

READ: Let’s not waste this crisis in American democracy

But let’s not give that incompetent fool now cowering in the White House too much credit. Trump has not caused the crisis in American democracy we’re witnessing today. That (dis)honour belongs to the Republican party, which has so abandoned the political centre in its quest to be relevant that radicals are now its primary constituency. The Republican party created President Donald Trump, and that’s a bed in which it must now lie.

Last week’s events reveal, once again, the festering wounds in American democracy and the institutional decay that a dangerous president and a pandemic have laid bare. We saw it in the way Capitol police were woefully unprepared to stop a violent mob of white people when they were perfectly capable, and arguably over-prepared, to crush nonviolent black protesters during BLM protests. We saw it in the cynical epiphanies of Trump’s Republican enablers who suddenly realized that their self-interested support for a mad king could maybe have deadly consequences.

The rot is also societal, though too many American leaders fail to see it, which, like a Mobius strip, brings us back to the rot itself. It’s what has prompted that tired old refrain: “This is not who we are,” when indeed, it is; this is America, or at least a significant part of it. America is white supremacy; it is white privilege, it is poorly-educated and brainwashed people clinging desperately to an ideology of greed.

With the Democrats now in control of both the executive and legislative branches of government after sweeping the Georgia Senate run-offs, one has the sense that America will try to quickly move on from the trauma of the last four years, that the reckoning that’s needed may never come, at least until history repeats itself, which is a distinct possibility in 2024.

In the interim, America does face some real dangers. They do not, however, emanate from a carnivalesque mob that failed spectacularly to conquer the heart of American democracy. The worst of those people—Trump included—should of course be punished, but the real danger lies in those who were absent, the quiet ones who are more careful and methodical, men like like Anthony Quinn Warner, who detonated a fertilizer bomb in Nashville, Tenn., on Christmas day, or the radical right-wing militias that groups like the Southern Poverty Law Center have warned for years represent the gravest threat to America.

These individuals and groups firmly believe that the Democratic Party is planning a communist takeover of America, or that it is a Satanic cult, or both. And as the Democrats take control of the levers of power, these people will be triggered.

The reality TV presidency has ended with a reality TV insurrection. But the reality of America is much more dire.