The great American migration you might have missed this week

Tabatha Southey: No one knows exactly why a Trump tweet sent millions of people to calmly waltz straight into the ocean blue 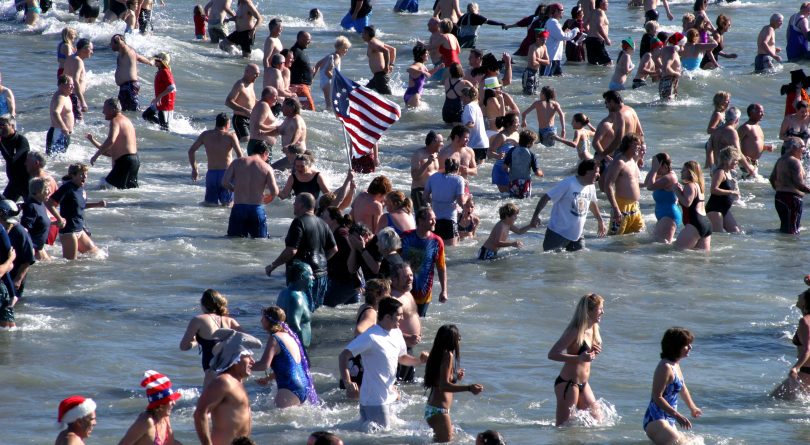 Scientists were dumbfounded by the discovery of an unusual new migratory pattern this week when a sizable portion of the U.S. population walked into the sea. Early on Wednesday evening, thousands and thousands of Americans just stopped, checked their phones and walked into the ocean.

The mass migration began among individuals with immediate access to an ocean, but before long the phenomenon had spread across the nation. Landlocked Ocean-Walker-Into-Ers from not-coast to not-coast are making the long trek towards the ocean, planning, as the name suggests, to keep trekking right on into it when they get there.

Experts are mostly at a loss to explain the phenomenon. “Nope, I got nothing,” said Dr. Christos Stewart, a research associate in evolutionary biology at the University of Chicago when contacted for comment. “With the famous exception of the Homo Sapiens Has A Timeshare In Floridius subspecies, human beings are not known for these kinds of inexplicable migrations. Much like how we can’t figure out why a person would willingly travel to Florida, we haven’t the foggiest idea why all these people decided to up and walk into the ocean.”

But Dr. Patricia Naidoo of Oxford’s Department of Painstakingly Trying to Explain Science to Journalists has a theory. “It’s going to take a lot more research before we can be certain, but evidence suggests the one thing that these voluntary saltwater submergers seem to have in common is a capacity to feel shame.”

“It was difficult to get them to stop and answer our survey and most of our pens did end up in the surf, but that’s certainly what the data is indicating so far,” explained Jeremy Nelson, a graduate student involved in Dr. Naidoo’s preliminary research. “Close to 77 per cent of respondents headed into the stormy brine answered, ‘I can’t even’ to one or more—well, mostly all—of our questions re: motivation for their deep dive,” he continued, shouting to be heard amid the crashing waves as he walked directly into the ocean.

Others are less circumspect about the cause of most of America walking straight into the ocean. “As always we caution that correlation does not necessarily show causation, but in this case it does seem the inciting incident was a presidential tweet sent out at 7:23 p.m. on Nov. 21,” said Kirsten Stevens Professor of Spontaneous Aquatic Ambulation Studies at the University of Innsbruck. “The sidewalks, highways, shorelines started filling up at 7:24. Sadly, we’ve yet to determine exactly what it was about this tweet that led to such an outsized reaction. To be honest, most of us around here are just happy to find our department so suddenly relevant. I guess this is what it felt like to be a Finnish forester last weekend.”

The tweet in question read: “Brutal and Extended Cold Blast could shatter ALL RECORDS – Whatever happened to Global Warming?”

The exact intended meaning of this message is unclear, but some linguists have concluded the president is trying to subtly convey to the world that he is in fact three old men in a trench coat yelling at the television.

Asked how we should respond to this seeming crisis, Donald Milne, lecturer in American history at Fitzwilliam College, Cambridge, told reporters, “I’m not overly concerned. While it’s understandable that the sight of throngs of people calmly walking into the ocean would cause alarm, history suggests these things do work themselves out. The famous phenomenon where millions of Americans all felt the need to hide their faces in shame by wearing a bucket on their head after Nixon was pardoned was disconcerting and certainly made for hazardous driving conditions, but we’re all still here and, for the most part, un-bucketed.”

SOUTHEY: With Brett Kavanaugh, misogyny is the message

Experts are still debating this week’s outbreak of littoral perambulation. Think tanks, NGOs and researchers responded to queries with a joint statement: “There is no consensus among the scientific community on what caused so many to walk straight into the ocean this week and what collective, dramatic and immediate action must be taken across all aspects of the economy and society if we are to have any hope of solving this urgent problem. This is lots of people walking into the ocean, not climate change.”

Interviews with the Ocean-Walker-Into-Ers do, however, shed some light on their thought processes and why this tweet has inspired such an extreme reaction—when most of Trump’s 39,000 tweets, almost all of which have been equally stupid, have been predominantly met with eye rolls, dank memes, fluctuations in the stock market, heads banged against desks and occasional quiet sobbing.

“I know, I know. It looks like an overreaction,” said Susan Melvern, 33, “and normally I’d agree walking into the Pacific might be a bit much, but did you see the tweet? Just hearing it read doesn’t do it justice. Why did he capitalize ‘Brutal and Extended Cold Blast’ like it was the title of his new country rock album? And then ‘ALL RECORDS’ in all caps. Personally I think slowly but steadily marching into the cold embrace of the waves is a pretty measured response. Now if you’ll excuse me…”

“Oh, I’ve been looking for a reason to walk into the sea for a while now,” Andrew Basu, 48, told reporters. “This doesn’t really have anything to do with Trump’s tweet. It’s just that with so many other people getting in on it, I thought this seemed like as good a time as any to walk straight into the ocean. The simple truth is that for a long while now I’ve known I just don’t want to live in a world where people write pieces on the tragedy of Trump staffers getting rejected on Tinder.”

“Who the hell are you people, what’s with the camera,” one woman who did not wish to be identified asked. “Can’t a woman snorkel in peace anymore?”

“My uncle and I have been fighting about this all day,” sighed Cole Brookson. “He says any large body of water will do and we should both just walk into Lake Erie, while I have a more serious commitment to walking into the ocean and feel we should do it in the actual ocean. It’s making for a tense Thanksgiving, but the whole family’s headed out in the morning. Mom will not stop saying, ‘Weather is not climate, weather is not climate,’ and packing towels.”

Similar arguments are repeated all across the nation. One expert in bad takes who wanted to remain anonymous on account of the fact that “people just will not stop dunking on me on the Internet, I don’t know what I’m doing wrong, I got takes so hot you need oven mitts to read them,” weighed in to say, “What we really need now is a return to civility. It’s a terrible shame to see families divided and worse, people unfriended on Facebook, over something as inconsequential as walking straight into the ocean.”