The guilty pleasures of pandemic travel

Scott Gilmore: If your travel is essential, then you're in for a treat. The pandemic offers a glimpse into a forgotten world when flying wasn't hell. 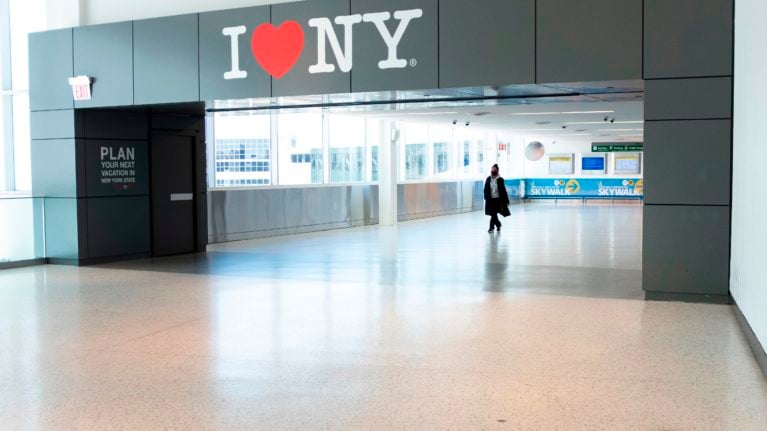 Terminal 5 of New York's JFK airport amid the novel coronavirus pandemic on May 13, 2020 (JOHANNES EISELE/AFP via Getty Images)

I hesitated to write this column. Maybe there are some things that should remain unreported. Sometimes, perhaps, the public good is best achieved by keeping the public in the dark. Or, possibly, we have to trust that our readers are responsible enough to process information like this, and then do the right thing. You’ll understand what I mean in a minute.

We’ve all been locked down for about three months now. There has been nothing like this in our history. Borders closed. Flights cancelled. The economy stopped. We were all told to stay home and, incredibly, the vast majority of us did. Motivated by a mixture of civic duty and self-preservation, we cancelled everything and settled in for the duration. And, a long slow tedious grind of a duration it has been.

I discovered this week the incredibly ironic side-effect of the lockdown is that air travel has returned to a golden age that possibly never even existed.

Last week I needed to get down to New York for work. I was not looking forward to it. As desperate as I was to break the monotony and escape Ottawa, I didn’t know what to expect and imagined the entire experience was going to be a lengthy, exhausting, troublesome, endurance test. I was entirely wrong.

First, booking the flight was incredibly easy. There are fewer routes scheduled, but every flight—I had half a dozen options—has seats available. And those seats are cheap. Demonstrating the truth about supply and demand curves, airlines are deeply discounting fares.

READ MORE: My son has never seen a grasshopper

Ticket in hand, getting to the airport was a breeze. In fact, it may have been the fastest journey from my door to the departure terminal ever. While road traffic is increasing, rush hour is still not a thing. For possibly the first time in my life, not once did I look at my watch, then my itinerary, then the Google maps app, then calculate the odds I would make my flight. This must be what the Buddhists mean when they talk about reaching a state of Zen.

Once at the airport, I was greeted by… no one. I had expected it to be empty, but not lifeless. The doors were open, but no other passengers could be seen. There were no porters, and no police. The information booth was empty. In the distance, across the departures hall, I saw a small group of ticketing staff chatting. That was it.

When I approached, they weren’t just friendly, they were genuinely happy to see me. As three of them stood by smiling while I checked-in, one thanked me for flying. The exhausted, harried, curt demeanor that I have grown to expect from airline staff was gone. It was unnerving.

My footsteps literally echoing through the airport, I walked to security. Presumably the same person who decides only one screening line is needed when 20 flights are scheduled to depart at the same time, also calculated three fully staffed lines were needed when there’s only one flight per hour. I counted 10 listless guards watching me as I breezed through security. They seemed almost disappointed the metal detector picked up nothing.

In some airports, entire terminals have been closed. Which means you don’t have to run a literal mile to catch your flight. I simply nodded at all the security guards and sat down at my gate—the nearest one. With me were five other passengers, each sitting in their own row. I got up, walked the length of the airport and back. That was it. Six of us were flying.

Instead of crackling intercom announcements, barely heard over a chattering crowd, the gate agent simply walked up to each of us with a friendly update: everything is on time. Boarding was both fast and civilized. The six of us kept our distance, and walked right to our seat. No queuing, no jostling, no squeezing down the aisle, no jamming luggage into the overhead rack, no seat mix-ups, no flustered flight attendants. It was confusing and dreamlike.

The passengers were separated by a few rows each. And we were given little packages of hand sanitizer, wipes, gloves, masks and drinking water as soon as we sat down. But it was clear everything had already been thoroughly sanitized. Economy class has never looked so clean.

With everyone onboard, they closed the doors and we took off. Just like that. There were no late passengers, no off-loading of bags, no waiting for other aircraft ahead of us. We just taxied from the gate to the runway, and then we were in the air. In fact, on one of my flights, air traffic control apparently had nothing to control, so we landed half an hour early.

Finding my connection was painless. The sprawling departures board where, normally, you have to swiftly find your flight details before it updates, was almost empty—an impossibly short list of all of today’s flights and some of tomorrow’s. And my gate? Next door.

When I arrived at my final destination, customs was equally easy. No lines. Friendly (albeit well-masked) border guards. And, after a short walk out of another empty terminal, I found a line of cabs waiting. Fifteen minutes later I was where I needed to be.

I have logged over a million miles of travel over the last 20 years. For several of those years I was a high mileage frequent flyer, showered with assistance and attention. But even then I have never had an easier, friendlier or more enjoyable travel experience as I did this week. I doubt that the romanticized golden age of travel, when 747s had cocktail lounges, was this frictionless or pleasant.

So, there you go. Do with this information what you will. Coronavirus is still killing us. Quarantines and lockdowns are still needed. You’re safer at home and we’re safer if you’re at home. But, if you really need to go somewhere, and if your travel is essential enough that you’ll be allowed across the border, and if you are willing to self-isolate for the required 14 days afterwards—well, you’re in for a treat. Enjoy it. Because one day soon we will once again all be crammed together in over-priced and under-sized seats, queuing in endless lines, and we will all be imagining a time when we could travel easily, even happily. A time like right now.