The hawks are screeching over Ukraine. Will cooler heads prevail?

Adnan R. Khan: There are far more effective ways the world can push back against Russian threats than with weapons and troops. War is what Putins wants. 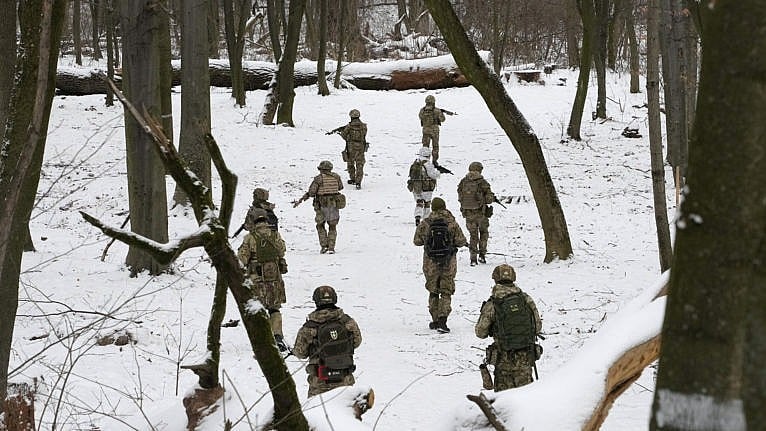 The war hawks are screeching for a more muscular response to Russian provocations at the Ukrainian border. The American president, trying to bolster his tough guy credentials, has threatened his Russian counterpart with an insurgency if he mounts an invasion.

He’s being egged on by the usual suspects in the American media. Washington Post commentator Max Boot has called for the U.S. and NATO to set up clandestine groups in Ukraine capable of launching a punishing guerilla war in case the Russians invade and occupy the country. He even suggests modeling the forces on the Ukrainian Insurgent Army (UIA), a World War II and Cold War-era guerrilla force that not only fought the Soviets but also participated in the ethnic cleansing of Ukraine’s Polish population and ultimately hoped to set up an ethnically-pure Ukrainian nation along the lines of Nazi Germany.

Clandestine far-right militias to fight Russians in case of an invasion? We’ve done that before, and it didn’t end well.

Of course, nothing should surprise us about this kind of unhinged view of the world. These are the same voices who loudly beat the drums for the invasion of Iraq. “Once we have deposed Saddam we can impose an American-led, international regency in Baghdad, to go along with the one in Kabul,” said Boot at the time.

Ukraine is a particularly dangerous place to be playing with that kind of fire: Evidence is mounting that the far-right has infiltrated the Ukrainian military. Indeed, according to an October report published by George Washington University, members of Ukraine’s Centuria group boasted on social media that they had received training from the Canadian Armed Forces. Centuria fashions itself as a protector of European “ethnic identity” and has ties to Ukraine’s far-right Azov movement.

The report pointed out that none of the countries training Ukraine’s military, including Canada, screens for extremist ideology. Canadian authorities responded by promising to investigate how it screens those it trains. The results of that investigation are still pending.

Whatever the investigation comes up with, it would be naïve to think that the training and weapons Canada is now providing to the Ukrainian military will not filter down to extremist militias, especially if Ukraine descends into an insurgency. Even now, the war in its eastern Donbas region is riddled with far-right groups, which have also attracted volunteers from as far away as the U.S. and Canada. If we are genuinely worried about the rise of far-right movements at home, we should be wary of aiding far-right movements abroad.

I have no doubt that Putin is well-aware of the risks NATO countries are taking with their military response to his provocations. He loved the Cold War precisely because Cold War competition was not rooted in the values of democratic governance; it was based on militarism, and militarism is the one thing Putin excels at. He wants nothing more than to see the Cold War rekindled.

But there are alternatives to letting him have his way. Germany has indicated that it is willing to cancel the Nord Stream 2 natural gas pipeline if Russia invades Ukraine. Of any economic sanctions, that would prove most painful to Russia, though it would also hurt Germany.

The effects, of course, wouldn’t be felt immediately. But over the medium to long term, meaningful sanctions would chip away at Putin’s popularity. Russia’s annexation of Crimea in early 2014 is a good example: Putin experienced an initial spike in popularity, but it didn’t last. Over subsequent years, economic sanctions ground away those gains.

Today, Putin faces the same level of unpopularity he faced in 2013, which may partly explain why he chose to turn up the heat on Ukraine now. At the same time, he’s up against a public mood in Russia which has soured on military adventurism.

In other words, the cards are stacked against Putin any way you look at it, except militarily. He could, of course, go full-on dictator, clamp down even harder on public dissent, and do whatever he wants. But that risks a further breakdown of the social contract with everyday Russians. Russia’s economy is already in tatters because of sanctions imposed after his 2014 annexation of Crimea, with a GDP now smaller than Canada’s. More sanctions would hurt, and likely mean massive public unrest and instability in Russia.

Facing such a grim future, a war footing is exactly what Putin wants. For bullies like him, there are far more effective ways the world can push back than piling troops along the border, or arming extremist paramilitaries who would someday have to be disarmed. What that would take is strategic unity to counter Putin’s divisive tactics. NATO members need to prove they can act as one, and support each other, even if that means economic and political costs in the short term.

Putin needs to learn that western democracies can mount a united front against him. Otherwise he will never stop.