The history of our cultural resistance against masks

Sadiya Ansari: In North America, instead of seeing masks as a form of communal protection, they evoke panic 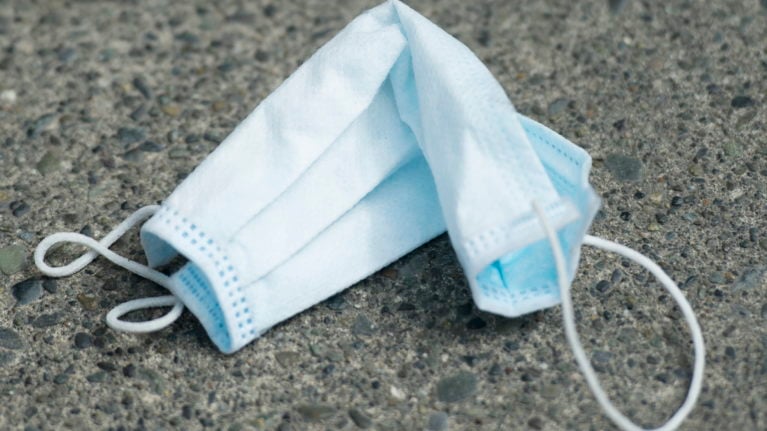 A discarded surgical mask is seen on the sidewalk in downtown Vancouver on Apr. 20, 2020. (Jonathan Hayward/CP)

Sadiya Ansari is Toronto-based writer and professor of journalism at Centennial College.

The very first weekend after schools were closed, and people prepared to “shelter in place,” I watched a series of films with extraordinarily low-stakes drama to counteract the ever-present anxiety that had already set in. I marvelled at how much the world had changed already: Ethan Hawke swinging off streetcar poles and kissing Julie Delpy, a total stranger, in Before Sunrise evoked horror rather than admiration for their careless joy-seeking. It struck me how quickly my brain had rewired to accept these new norms. But there was one change that North Americans have been much slower to adopt: wearing a mask.

Entering week six of life in a pandemic, while many more people are wearing masks—homemade, ordered from Etsy and the odd surgical mask that makes you look at people suspiciously—it’s still definitely not universal. And after weeks of confusing direction on the issue (initially, Canadians were told not to wear a mask unless they were ill), the federal government just announced a new rule that air travellers within Canada must prove they have a non-medical mask in order to board a plane.

But why were we so slow to adopt these kinds of rules?

MORE: The case for mandatory mask-wearing in Canada

As I’ve argued elsewhere, hard and fast rules help us make decisions in uncertain times. And our government’s lack of clear direction definitely had a role to play in our slow adoption. But even in the face of that, there has been a larger cultural resistance. This resistance is especially obvious when compared to East Asian countries where mask-wearing is “an affirmation of civic-mindedness and conscientiousness,” as Ed Yong writes in The Atlantic.

Is it that our culture is simply more obsessed with “the self,” and that individualism has made us resistant to adopting measures to protect the community? The swift adoption of physical distancing measures for collective protection suggests it’s not that simple. While there are established reasons that normalize mask-wearing in East Asia countries where they are commonly worn, in Canada, the lack of these norms has been our biggest barrier. It’s meant that instead of seeing masks as a form of communal protection, masks evoke panic.

The use of masks by medical professionals dates back at least to the 17th century, when European doctors facing the plague (otherwise known as the Black Death pandemic) wore headgear with “beaks” half-a-foot long or so, filled with herbs that were incorrectly believed to prevent transmission of the virus. But the use of masks for protecting the public at large is rooted in East Asia.

MORE: Why that about-face on wearing masks is a problem

Wu Lien Teh, a doctor who later became known as the “father” of China’s public health system, advocated for the widespread use of masks to protect against airborne transmission of the pneumonic plague spreading throughout Manchuria in 1910. He’s credited for inventing the “anti-plague mask” which was similar to recently-invented surgical gear but had features like extra layers designed for Manchuria’s winter, according to Christos Lynteris, a medical anthropologist at the University of St. Andrews. Writing in the Medical Anthropology journal, Lynteris also notes that masks had a broader meaning for those who donned them—it was “a performance of medical reason and hygienic modernity.”

When the 1917 Spanish flu spread, masks were adopted around the world, including in the U.S. and Canada. Provinces in Canada and many American cities even enforced wearing masks in public (in the U.S. this was accompanied by  libertarian resistance and officials who were skeptical of their efficacy).

The Spanish flu was also the catalyst for widespread adoption of masks in Japan. But the difference was in subsequent pandemics, masks returned. They became “increasingly fixed as a familiar part of the national response to flu pandemic,” write Adam Burgess and Mitsutoshi Horii in the journal of  Sociology of Health and Illness, including during outbreaks in 1949-50 and 1966-68. While modern medicine was a prime motivator to wear masks, Burgess and Horii note that it helped that “the barrier of the mask was compatible with the traditional symbolic order of purity and pollution and a miasmatic, rather than viral‐based understanding of infection.”

And across the region, particularly in densely-populated cities, this pandemic-era courtesy has been extended when people have a cold or flu, as a means to contain their germs in close quarters like subway cars. In Hong Kong, for instance, wearing a mask became much more common after the SARS outbreak in 2003. As Uri Friedman writes in The Atlantic, in some Asian countries, “those who don’t wear masks during public-health crises are the ones who are stigmatized.”

In Canada, masks invite stigma. Until recently, a medical mask meant that you are sick, making the association with disease rather than prevention.

British Columbia resident Jong Yun Park told the Globe and Mail he wore a mask whenever he went out in South Korea while visiting when the virus broke out, but stopped when returning to Canada. “If you wear a mask here, people will [consider] you as another patient,” Park told the Globe. “I just tried to adapt to Canadian culture more when I am here. But back at home…if you don’t wear it, then people would be like ‘what a freak.’”

As COVID-19 spread across the world, we were fed endless images of East Asian people in masks accompanying increasingly terrifying stories about its spread—with no evidence that the people in the photo were carrying the virus. The reason the careless use of these photos was considered racist is because the photos were used to denote spread of the virus, not prevention or “civic-mindedness.”

And then there is the history of anti-mask laws across Canada and the U.S. Now, as in the era of the Spanish flu, states had to legalize wearing masks in public. And there are modern laws on the books in Canada—in 2013 it became illegal to wear one during a riot or unlawful protest in Canada. The private member’s bill, passed by Stephen Harper’s government, was introduced after the 2010 G20 protests in Toronto and the 2011 Stanley Cup riots in Vancouver.  And we know the Quebec government feels very strongly about concealing your face in public.

There’s an undercurrent of masks as menacing, signalling political extremism or criminality. This, unfortunately, has also resulted in racism—some Black men in the U.S. are afraid to follow the C.D.C. recommendation to wear a mask in public. And these fears have already proven to be founded: two men who wore surgical masks on a shopping trip to Walmart in Illinois posted a video to YouTube showing they were kicked out of the store by a police officer.

But there’s evidence things are changing. Not only are we seeing more masks in public, what they denote is also changing, appearing to be a show of solidarity rather than just an act of self-protection. A friend told me the other day she’s more comfortable shopping in Toronto’s Chinatown because the proportion of people wearing masks is higher than in any other big-box grocery store she visits downtown.

This pandemic has shown how quickly culture can change. As we continue to adopt new measures, we can transform what masks used to mean to us. Empty streets are no longer eerie, a phone call is more thoughtful than a visit. And instead of a sign that things are out of control, masks will become a sign of taking back control.