The hits and misses of Canada's pandemic response

Tom Mulcair: There have been moments of brilliance in handling this crisis. But too often bad leadership and sniping have got in the way of good common sense. 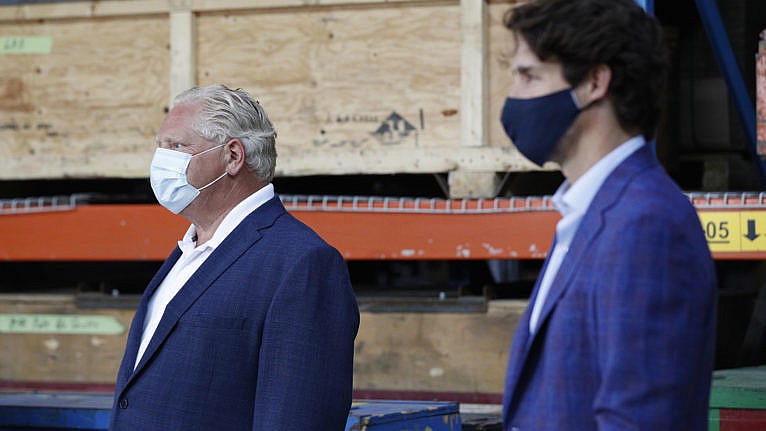 When all is said and done, when the last arm has received a vaccination, when we’ve finally had a budget and a federal election, there will come a time of reckoning.

The inevitable commissions of inquiry will wring their hands and offer up lengthy reports years later. Several things that should be dissected will probably be glossed over: our tendency to grow our governments bigger instead of smarter; our chronic failure to enforce; and the need to develop a culture of respectful multi-level governance in Canada.

COVID-19 has presented Canadians with a complex intergovernmental problem the likes of which we’ve never seen. Health care being primarily the jurisdiction of provinces under our system, they have borne the brunt of direct responsibility for handling the crisis. The feds main roles were to keep us safe at the borders, help families with direct aid and ensure actual delivery of vaccines to Canada. Cities have been pushed to the frontlines in the battle and their deeper knowledge of their communities’ needs has been essential in dealing with the health crisis.

With the tragic results in extended care facilities and seniors residences across the country, it’s clear that there has been a failure to enact and enforce standards of practice that protect these most vulnerable clienteles. That is a systemic provincial failure. Justin Trudeau is right to insist that provinces include those areas in our medicare system with agreed upon norms, if the federal government is going to increase its percentage of health-care spending. It’s been a national tragedy that now requires a national response.

The provinces are already signalling that Ottawa should  open its wallet more but won’t accept “interference” in the delivery of health care. National standards are the backbone of our free, universal, public Medicare system. The discussion about extending those to seniors and long term care has to take place. There is no alternative.

There have been moments of brilliance in handling this unprecedented crisis. Trudeau resolved to act quickly to help families that suddenly found themselves in dire straits. He unblinkingly pushed aside the nervous bureaucrats who’d designed a first version of emergency aid that was full of hoops and obstacles. He wanted the money to flow rapidly so that those millions who’d lost their jobs overnight in the first wave could put food on the table. It worked and Trudeau will always deserve credit for it.  Therein lies a lesson that shouldn’t be lost when we do the post-mortem of the crisis: our bureaucracies have reflexes and set-in ways of doing things that simply aren’t adaptable. Sometimes they have to be rethought completely. That requires leadership and in his handling of this part of the file, Trudeau was exceptional.

At our borders, on the other hand, Canadians have not been protected. Trudeau has finally accepted to do the obvious right thing and shut the border to most non-essential air travel. It took forever as every argument, plausible or not, was put forward to block the idea. Intergovernmental affairs minister Dominic Leblanc went so far as to say that leaving and entering the country is a Charter right. (Mobility is a Charter right, subject to reasonable limits such as keeping people safe during a health crisis!).

If assistance to families was the brightest moment in the Federal performance, its handling of our borders has been a pratfall. The senseless stubborn refusal to acknowledge that flights from China had to be cancelled without delay produced tragic results. There was so little protection at airports, that Montréal Mayor Valerie Plante took it upon herself to send her own public health officials to meet passengers and tell them to self-isolate because the feds weren’t doing a thing.

Once again, implausible arguments got in the way of good common sense. It was said that banning flights from China would be racist! China has unbelievably strict rules about foreigners entering its country. It’s not racist, it’s public health.

One of my sisters is a University professor in China. When the pandemic hit, like many westerners, Deb found her way back home. She called me when she returned to Vancouver shocked at the total lack of controls at the airport. “People aren’t even wearing masks!” I repeated what I’d heard our health “experts” say: The mask protects others not the one wearing it. My sister chuckled, “but Tommy, that doesn’t make any sense, if everyone’s wearing a mask, everyone’s protected.” (It would be several more months before those same experts told everyone that wearing masks was essential.)

While everyone appeared able to put water in their wine during the first few months of the pandemic in order to serve the higher cause, COVID fatigue is starting to show in the halls of governments at all levels. Since the beginning of the new year, the sniping between the orders of government has grown into a firefight. Trudeau has taken potshots at Quebec and Ontario’s ability to administer vaccines, the provinces have shot back that the Fed’s haven’t been able to deliver them.

The pandemic has changed the normal rules and there is an opportunity to rethink our approach to problem solving in our federation. If it were not for the insistence of premiers like François Legault and Doug Ford, Trudeau would never have shut down vacation flights. Airports and air travel are pure federal jurisdiction but the feds had no choice but to finally act. Those same premiers now have to accept that the dire results in their area of responsibility requires a willingness to discuss change, in the interest of all of Canada’s citizens.

Some provinces have done better than others. British Columbia’s handling of the pandemic remains the gold standard among the largest provinces. Quebec, on the other hand, has about five times the deaths per capita as B.C. and three times more than its sister province, Ontario. Premier Legault’s popularity remains high and he’s already signalled that the only inquiry he’ll accept will be one that he controls.

Recent events are proving that despite our smug tendency to look down on American performance during the pandemic, we’re going to have a lot of soul-searching of our own to do, when the dust settles on the horror that we’ve all been through.

Canadians are rightfully concerned about when they can get vaccinated, but they’re not the only ones who are worried. Trudeau has now crossed the Rubicon on the vaccine front and the results of the next election could well be determined by whether or not he can finally deliver. He has solemnly promised specific dates and quantities, even as drug makers were holding back shipments. Those contracts with pharmaceutical firms may be kept secret but they’re proving a huge political problem for Trudeau.

It may not attract votes, but good, competent public administration should also be a part of what’s on offer during an election. Justin Trudeau is a remarkable politician with unparalleled human skills. Problem is, you can’t charm people into believing they’ve been vaccinated, if they haven’t.