Terry Glavin: What kind of person would do such a thing? Contrary to the PM's advice to journalists, there is nothing destructive in asking and seeking answers. 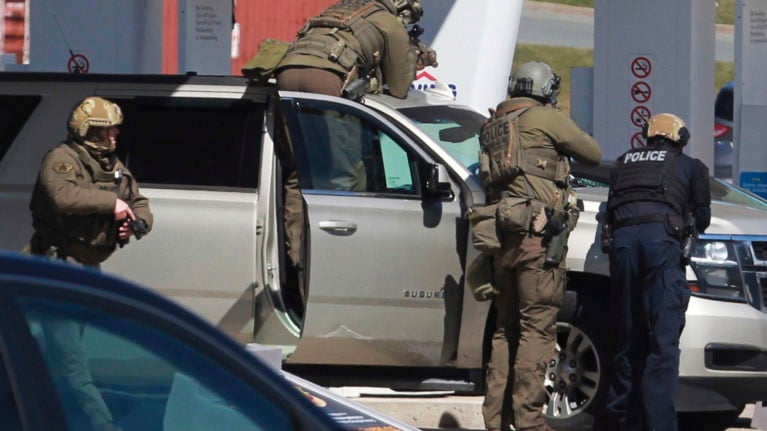 Among the first questions that reasonable people were asking in the early aftermath of the massacre that unfolded over 14 horrifying hours in Nova Scotia over the weekend were these three: What the hell just happened? Why would somebody do something like this? What sort of person would do such a thing?

There is nothing macabre or morbid or in any way wrong or destructive to social cohesion in asking these questions out loud, and in wanting and expecting news organizations to seek out accurate answers to them. These are in fact precisely the questions the RCMP is setting out to answer. In a free and democratic society, it is right and proper that journalists are making the same sorts of inquiries and reporting the facts as they are discovered.

For these reasons, it would be reckless for Prime Minister Justin Trudeau to give the appearance of instructing or advising journalists in how they should do their jobs, or to prejudge Gabriel Wortman’s motives, or to encourage weird ideas about how Canadians will or should respond to the barbaric acts of mayhem Wortman committed over the weekend.

But however well-intentioned he may have been, Trudeau did all three of these things at his Monday press conference. Trudeau asked the media to avoid so much as mentioning Wortman’s name or publishing a photograph of him. “Do not give this person the gift of infamy,” Trudeau said. Then there was this: “No one man’s action can build a wall between us and a better day, no matter how evil, how thoughtless or how destructive.”

Are we not all shocked and grieving and united in our sorrow and disbelief? Isn’t Trudeau himself proposing a wall between journalists who merely choose to name the killer and those of us who would expect them to, and editors who will ignore Trudeau’s advice and those of us who would want them to? Wouldn’t a wall like that immediately divide the mourners into Trudeau’s more ardent supporters on one side, and his equally fervent detractors on the other?

If there was any sort of wall going up in the early innings of this heartbreaking tragedy, its foundations could be found in the hours immediately after the first inklings about Wortman’s personality began to find their way into news reports about the massacre. Its bricks and mortar were expressions of outrage that Wortman was being somehow “humanized” by news reports to the effect that he was just a mild-mannered denturist from Dartmouth, whose friends and acquaintances regarded as a perfectly nice fellow, perhaps a bit odd, but otherwise harmless. And that this sort of treatment would only be afforded a white man. Or so one ubiquitous argument goes.

But reputable news organizations were similarly subjected to a thrashing in July, 2018 for merely reporting the sympathetic portrait drawn from the way friends and acquaintances described the horribly ill Faisal Hussain, whose Toronto shooting rampage ended when he took his own life after gunning down 15 people, killing two of them.

The “wall” between us back then was being built from the bricks and mortar of lies and half-truths and hysteria incited by fringe right-wing polemicists who insisted that Hussain’s shooting spree was some kind of Islamist-inspired act of terrorism. It was absolutely nothing of the kind.

Neither are Trudeau’s comments easily warranted by the example set by New Zealand Prime Minister Jacinda Ardern last year, following the terrorist atrocity carried out by the white nationalist Australian Brenton Tarrant in Christchurch. “He sought many things from his act of terror, but one was notoriety,” Ardern said back then, “and that is why you will never hear me mention his name. . . He is a terrorist; he is a criminal; he is an extremist. But he will, when I speak, be nameless.”

With these words, Ardern spoke both a moral truth and an objective truth, and if anything, she understated the case. Tarrant’s desire for notoriety wasn’t the half of it. His rampage was specifically intended as “propaganda of the deed.” He slaughtered 50 Muslim people and left another 42 badly wounded. He broadcast his savagery by livestreaming it all. He simultaneously published a 74-page fascist manifesto setting out his sociopathic intentions.

New Zealand’s news organizations generally followed Ardern’s example. Whether or not it was wise, in retrospect, the mere possession of Tarrant’s manifesto was made a criminal offence. Genuinely astonished and curious New Zealanders were obliged to rummage through the detritus of far-right websites to find it.

All of that suggests a vastly different set of circumstances than anything known so far about Wortman, who went about his horrifying business in the masquerade of an RCMP officer, which may end up being all there is that’s worth knowing about him. The sooner we all forget Wortman’s name, the better, but we all have a right to know what it is, just as we all have the right to know the names of the victims he left strewn across the Nova Scotia countryside between the town of Portapique on Saturday night and the gas station in Enfield where it ended on Sunday.

There is a case to be made that Canadian journalists should pay close attention to the American experience with mass shootings, so as to minimize the risk of news coverage that might encourage sociopaths to imitate Wortman’s bedlam. But at the same time, there isn’t a mass shooting of one kind or another in Canada every two weeks or so.

Canadian journalists are not children who require direction from the Prime Minister. There should be no wall of any kind between Canadians in taking up the duty to console and comfort the survivors and the loved ones as they mourn their dead.

So let’s not build one.