The kitchen's on fire, and Scheer won't grab the fire extinguisher

Tabatha Southey: The Tories' strategy to fight climate change demonizes the most logical tool and embraces, well, they won't tell anyone exactly what 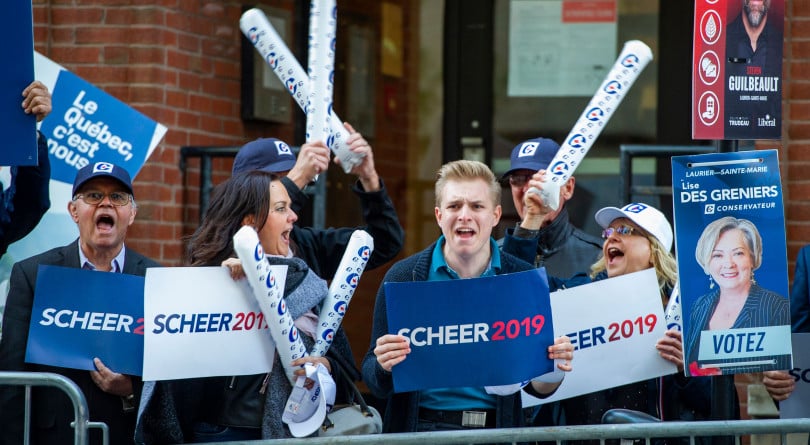 Supporters await the arrival of party leaders for the French debate for the 2019 federal election, the "Face-a-Face 2019" presented in the TVA studios, in Montreal, Quebec, Canada, on Oct. 2. (Photo by Sebastien St-Jean/AFP via Getty Images)

The Conservative Party of Canada has painted itself into a corner on the issue of climate change. Were the issue not quite so pressing, and the injury not so entirely self-inflicted, one could almost feel sorry for the party. Here they are, hoping to form the government in a country where the majority of people recognize climate change as the massive threat it is, and the Conservatives can only shout, “Look over there! China!” and try to change the subject.

For months and months now, the Conservatives have actively demonized the least intrusive, lowest-regulation, fairest, most efficient, one could almost say most “conservative” means of fighting climate change. By rights, a price on carbon ought to be a Conservative policy, and had they just quietly taken a carbon tax on board, with a couple of branding tweaks, few would have noticed and very few would have minded.

As it is, the Conservatives have thrown their ideological child—pay for what you use—to the wolves. They are left making nebulous promises to go after big, bad businesses while offering layers and layers of government incentives and “behave yourselves” subsidies, all of which will necessitate kilometres and kilometres of red tape and will be paid for with tax money. The left could sue.

The Conservative Party’s carbon-priceless, yet otherwise oblique environmental platform, states that it will impose standards on “major emitters,” but it doesn’t go so far as to offer much in the way of specifics as to what those standards—or the consequences of violating them—would be.

In keeping with the rest of the tone of the Dad-themed campaign, theirs is the “Don’t give me that look and don’t make me turn this car around” of environmental platforms, and an eye-roll is the almost involuntary response. Also, they like to tell scary stories about carbon pricing, tales that don’t always hold up under scrutiny.

The fact of the matter is that subsidies have proven to be far less effective than carbon pricing at achieving a reduction in emissions. Among other things, a carbon tax allows the people with the most knowledge of their particular business or household to decide if, and better yet, how (from a full energy audit at a refrigeration plant to tossing out that ancient beer fridge) to best to shrink their carbon footprint.

But Andrew Scheer has made it clear that eliminating the carbon tax is the first thing his party will do if elected, and there’s no turning back from that promise now. Scheer offers this no-carbon-tax information at the drop of any questions about how the Conservatives plan to tackle climate change. He keeps telling Canadians about the thing he plans to take away, as if that fills the void.

It sure looks as if the Conservatives don’t have much of anything to offer anyone who isn’t a flat-out climate change denier, and that’s not a good position for a party that would like you to think of them as the mainest of the mainstream to have painstakingly manoeuvred itself into.

As far as the climate is concerned, It’s like we have a grease fire and it’s already out of the pan and all the experts agree the whole kitchen is about to go up in flames, and then our only house. This thing is way past the point where the Conservatives can openly claim that there is no fire. Almost no one in Canada is buying that anymore, and if they are they’re voting for Maxime Bernier anyway, and the Conservatives know that.

So here the Conservatives are. They’ve spent the past year telling you that a good tool for fighting a kitchen fire is in fact the devil’s right hand. “Trust us. We won’t use a fire extinguisher!” is practically their campaign motto, second only to, “The Conservative Party of Canada: Have You Tried Blowing On It?” And while the planet has gone from a few people saying “Do you smell smoke? I smell smoke” to scientists pulling alarms everywhere, the Conservatives have done little else but warn Canadians that if they even pick up a fire extinguisher they’ll have already done worse than burn the house down. Maybe throw some natural gas on it, they suggest.

Despite all the evidence to the contrary, Scheer insists that the carbon price fire extinguisher doesn’t work, that it can’t help us transition successfully to a non-pyromaniacal economy.

On the provincial level, the Conservatives suggest that anyone so much as gesturing towards the extinguisher is part of a foreign-funded conspiracy to destroy the kitchen fire industry, upon which, we are told, our economy depends. This despite the fact that, as Clean Energy Canada reported this week, investment has been flooding into the clean energy sector, which now gainfully employs 298,000 Canadians and has been growing a third faster than the rest of the Canadian economy.

Pretty much all Andrew Scheer’s Conservatives can do now is try to convince Canadians that there’s a non-specific better way. Really, they say, your grease fire is just a small part of the global fire issue. If you sell the apartment next door something to help the residents extinguish their burning couch, it should be safe to ignore your own flaming stove.

They’ll invest, the Conservatives say, in technologies that may, in time, help you adjust to the house being on fire.

While every other major party leader attended Climate Strike protests, like the ones being held all around the world, Scheer proposed doubling a B.C. tunnel’s capacity from four lanes to eight to, he insisted, reduce congestion, and thus emissions. This is a plan that many studies show would only work if the tunnel ran through Fairyland.

This is Scheer basically standing next to the flaming stove and saying, “Look, if you had another stove, you could cook while this one was burning! Problem solved!” He literally wants to pour gas on the fire.

The carbon tax fire extinguisher is right there on the counter. Everyone agrees that a fire extinguisher isn’t the be-all-end-all of fire prevention—there will need to be further systemic changes—but for the moment, it offers a highly effective, direct method of combating the problem.

“No!” the Conservatives cry, “anything but the fire extinguisher, or cap and trade!” There are other tools, they say. They can’t show you them right now but, just hypothetically, what would you say about a hair dryer? It has three speeds and is made from magic climate change-fighting Canadian aluminum.