Adnan R. Khan: At a historically critical moment, when the world really does need more Canada, it’s nowhere to be found 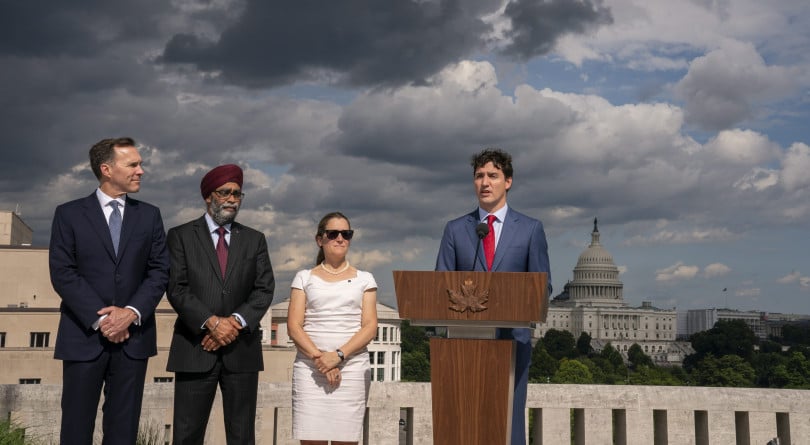 Trudeau speaks to reporters from the roof of the Canadian Embassy in Washington on June 20, 2019 (AP Photo/J. Scott Applewhite)

Every October, Canada invades Istanbul in a way that might seem downright crass to Canadian sensibilities. The city’s historic Beyoglu district, one of its richest and most liberal, home to hundreds of bars, restaurants, galleries, clubs and, at one time, the Canadian consulate, transforms into a red and white extravaganza, its cobblestoned alleyways adorned with posters announcing the yearly Canada Edu Days fair.

Now, if the fair feted Canada’s contributions to the world—multiculturalism, cooperation, tolerance—there would be no need for this column. Canada would be, finally, touting all those things that are increasingly, in a world infected by authoritarianism and self-interest, disappearing.

Instead, the fair does what Canada seems to do best in the world: poaching talent. As the name implies, Canada Edu Days is about studying in Canada. Every year, it pairs up Canadian colleges with thousands of young dreamers eyeing a way out of Turkey’s deteriorating economy and its socio-political morass.

That’s great; Canada needs talent, and Turkey’s remarkably talented youth are in desperate need of opportunities. But in and of itself, it’s also a feature of Canada’s failure to act responsibly at a historically critical moment: Rather than bringing what makes Canada great to the world when the world needs leadership, it is capitalizing on the chaos, siphoning off valuable human resources like a war profiteer.

This is the dark side of Canada’s pollyannaish self-image. We are great in large part because we have an immigration system that prioritizes talent over desperation. We can retreat at times of global uncertainty because we have valuable resources and a relatively small population.

READ MORE: The death of Jamal Khashoggi and the weaponization of diplomacy

But retreat should not be an option in a world where men like Donald Trump, Xi Jinping and Jair Bolsonaro are ascendant. Nor should waiting and hoping that these agents of self-interest will magically disappear and the world will go back to normal. Experts warn that is simply not going to happen. Canada should not be trying to save the world order as it was but helping to shape the world order as it will be when the dust finally does settle.

The Liberal government, like past governments, appears unwilling to take on that task.  If the Throne Speech was any indication, Canada’s role in the world will figure even less prominently than it has in the recent past. All the pretty words reinforced what has become the defining feature of the Liberal government on the world stage: It talks in the modernist voice about grand narratives—global peace and harmony, equality and justice—but fails to appreciate the postmodern reality of fragmentation and discord.

What we need is boldness. Canada’s foreign service is in shambles; it needs urgent reform and an infusion of funding. The Liberals may not have created the problem, but they have failed to address it and that failure has had consequences. As Jennifer Welsh, the Canada 150 research chair in Global Governance and Security and director of the Centre for International Peace and Security Studies at McGill University, told me in July, the Liberal government’s foreign policy has been “ineffective” in many cases because it lacks the “deep relationships” needed in a world where traditional alliances are unravelling.

“An operating principle of our foreign policy should be that we have to form relationships around particular issues with countries where we believe we have enough common ground to advance things together,” she said. “In the current environment, that is going to require not necessarily the usual suspects.”

Without a muscular foreign service, there is no developing those relationships. Foreign policy becomes what Daniel Livermore, senior fellow at the University of Ottawa’s Graduate School of Public and International Affairs, calls “government by PMO directive”.

“That was very much the case under Harper,” he says. ” The PMO decides something and then says to Global Affairs here’s what we’re going to do. There has been a lot more pushback from Global Affairs under Trudeau but it hasn’t been nearly strong enough.”

The problem, Livermore adds, is fundamental to the department. It lacks the “bench strength” to “offer an entirely different vision of how to do foreign policy.”

For a country like Canada, a middle power with limited heft in the world, knowledge is essential. Middle powers have to carefully pick and choose their moments and identify issues where they feel they can have a measurable impact. But instead of taking up the challenge, the Liberals have retreated into a defensive posture.

Canada should prioritize more engagement with the world at every level, from leadership to the grassroots. Here in Istanbul, it seemed a few years ago that something was about change after the Canadian consulate was shifted to a shiny new office tower in the Levent business district. It was an improvement from the dingy apartment Canada used occupy in Beyoglu, where one woman and her cat would greet visitors with listless stares. It felt as if the new consulate would be more active, more dynamic, more forward leaning.

But the early signs were there of a different kind of shift. Heavy security greeted visitors to the office tower. The C-suite feel also portended the growing Canadian dependence on trade-based diplomacy. Canada would engage with CEOs and business leaders from its perch high above Istanbul’s frenetic streets but at the expense of understanding the mood of the people.

Wouldn’t it be great if instead of a student recruitment fair, Istanbul was painted red red and white with posters announcing the opening of a Canadian cultural centre? Or a multiculturalism festival? Or an art exhibition? Wouldn’t it be great if Canada’s engagement with the world included talking to young people on the streets, the same young people who are now protesting in Hong Kong, Chile and Iraq?

That kind of engagement would mean beefing up our foreign service with people who can speak local languages, who are comfortable leaving the confines of our cozy diplomatic missions and getting their hands dirty. It would mean being bold.