The Liberals can’t shut down what they don’t control

Andrew MacDougall: The PM needs to realize the SNC-Lavalin scandal isn't going anywhere—not with two former ministers who refuse to play by the old rules 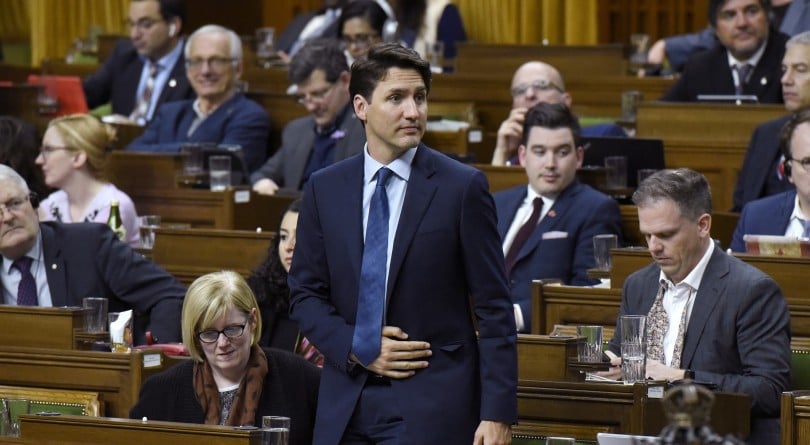 Trudeau rises to vote during a marathon session as it continues into its second night in the House of Commons on Thursday, March 21, 2019. (THE CANADIAN PRESS/Justin Tang)

As a rule of thumb, a “shut down” strategy only works if you’re actually in control of the things you need to shut down.

A House of Commons justice committee stacked with a majority of your party members? Eminently shut-downable. An office full of your loyal employees? Equally sealable. A wayward clerk of the Privy Council? With a gentle shove you can even send one of them on his way.

But Justin Trudeau isn’t in control of all of the things he needs to shut down in the SNC-Lavalin scandal. That’s his problem. You can’t shout “nothing to see here” when the chorus is free to pop up behind you and shout “look over here” at the top of their lungs.

That’s what the opposition has chosen to do, literally in this case, as they screamed their way through Bill Morneau’s budget speech. Andrew Scheer’s Conservatives are also using every trick in the Parliamentary procedure rule book to protest the justice committee’s decision to end its ‘investigation’ into SNC, including forcing a standing vote on each line item in the budget.

It might not be elegant, but it’s keeping people from talking about the thing (i.e. the budget) Trudeau hoped would change the channel from Jody Wilson-Raybould and her pesky insistence on the rule of law.

READ MORE: Jane Philpott: ‘There’s much more to the story that needs to be told’

No, you can’t shut the opposition down, you can only hope that everybody gets tired of hearing from them. Which in Canadian politics, to be fair, usually happens. As a nation, we only have so much attention span for caterwauling.

But Canadians have an endless attention span when it comes to the exotic, like when the New York Times decides to weigh in on our politics. Or when the OECD gets a little snippy about our treatment of corruption. And then there’s the catnip of scandal: friendly fire.

Whatever hope Justin Trudeau had of using his last budget to lever SNC off the nation’s front pages died when Maclean’s hit publish on Paul Wells’ cannonball of an interview with Philpott, Trudeau’s former favourite minister (or, as lore has it, the only minister capable of filling Scott Brison’s apparently Olympic-sized shoes at the Treasury Board).

“There’s much more to the story that needs to be told,” Philpott told Wells with respect to SNC-Lavalin. Much more? Really? “We actually owe it to Canadians as politicians to ensure that they have the truth,” she added. That, my friends, is what we call “juicy”. And on and on she went.

It was so raunchy, the Conservatives had to smuggle it into the House in a brown paper bag. And about half of the Conservative caucus then took turns reading sections of this political Tropic of Cancer into the record. They were euphoric.

Because until Philpott’s interview, it was widely assumed the broad (and many of the finer) strokes were known re: SNC. But Philpott appeared to be hinting at something much grander. Something much more sinister.

Had it been a serial self-aggrandizer or self-promoter telling us these things that would be one thing. But when it’s the political equivalent of Mother Superior implying the Prime Minister has been naughty everyone moves to the edge of their pews.

Not that Philpott actually elaborated on her concerns. She went only as far as her Trudeau-delineated handcuffs would allow. No cabinet confidences were broken; instead, Philpott reiterated her concern for the rule of law, portraying Wilson-Raybould as a lonely minister with her finger in the dike of justice, holding back the flow from the PMO wanting SNC to receive its DPA.

“Whether there is one attempt to interfere or whether there are 20 attempts to interfere, that crosses ethical and constitutional lines,” Philpott said of the Prime Minister and his office’s repeated intrusions into Wilson-Raybould’s jurisdiction.

You could practically see the air go out of the Prime Minister’s Office with each question and answer. If the issue managers in Trudeau’s employ didn’t have Philpott voodoo dolls, they do now, where they sit next to those of Wilson-Raybould.

Over in Parliament, meanwhile, Liberal MPs were struggling to pick the righteous shrapnel out of their backs. “[Philpott] is well aware of how we all feel,” Liberal MP Judy Sgro told a reporter. “You know, we don’t want to damage the party, we’ve got a lot of work to do. This is hanging over our head with this innuendo with this, that and the rest of it.”

One can understand Sgro’s frustration. Politics is hard enough without having to worry about attacks from your own side. But it doesn’t appear to have dawned on Sgro that it could be her leader, and not Philpott or Wilson-Raybould, who are doing the damage to her party. Sgro just wants it all shut down, like she’s seen countless other scandals shut down using solidarity in her time.

Modern politics can make sense of anything, it seems, other than newcomers to politics refusing to behave like typical politicians. What Justin Trudeau needs to realize is that the SNC scandal isn’t going away until these two non-politician former ministers are allowed to have their full say.

That Trudeau isn’t letting them speak can only mean he fears that what they have to say will destroy him.