Andrew MacDougall: The Trudeau of today isn’t the same weapon as the Trudeau of 2015. Why, then, are the Liberals still so Trudeau-centric in 2021? 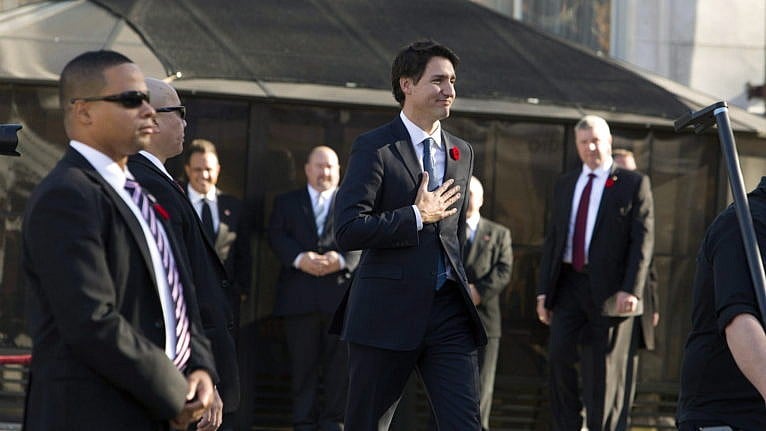 Trudeau acknowledges members of the public as he makes his way to a news conference after the swearing-in ceremony at Rideau Hall, on Nov. 4, 2015 (Fred Chartrand/CP)

If Winston Churchill reckoned generals were always fighting the last war, what would he make of the Liberal Party of Canada, who have continually fought the same war against their Conservative adversaries since that party’s re-consolidation in 2003? No matter the electoral war, it’s the same Liberal jaw-jaw.

Abortion restrictions. Private health care. Gutting the CBC. Guns. (INSERT BAD THING THE AMERICAN RIGHT LIKES DOING). The Liberal attacks could be written while sleeping, which explains why Justin Trudeau’s campaign is half-awake. To the Liberals, it doesn’t matter that the bogeyman never manifests itself, only that enough fraidy-cat left-wingers come running to (INSERT LIBERAL LEADER HERE) for protection from the mythical big, bad, gun-totin’, abortion-forcin’, wolf.

In one sense, it’s hard to argue with what works. The Liberals have used these scare tactics to varying degrees of success in the past; that’s why they keep going to the well. Except they lost to Stephen Harper in 2006, 2008 and 2011, and saw their majorities downgraded to minorities in 2004 and 2019 (where they also lost the popular vote). The only majority the Liberals have won against the reconstituted right came in 2015. What was different then?

Oh, right. A chap named Justin Trudeau. You know, the relentlessly optimistic, fresh-faced leader who wanted more feminism, more transparency, some legal weed, a different way to do elections and more spending. There was hardly a cross word spoken, or scare attack aired during the Liberals’ historic 2015 campaign. And you know what? The voters took to that Trudeau cat.

So did the world. The first two years of Trudeau’s mandate were one long squeal of global joy, especially after Donald Trump arrived to put the white back in the White House. Next to Trump, Trudeau was the poster child for modern liberalism: progressive, virtuous and relentlessly optimistic about the power of government. Canada, as the Liberal government never tired of telling us, was ‘back’.

And then Trudeau regressed.

There was the Aga Khan private island vacation which earned Trudeau his first slap from the Ethics Commissioner. Then there was SNC-Lavalin, which cost the Prime Minister his closest advisor, two cabinet ministers, and credibility in the eyes of the electorate, who reduced him to a minority government in the far less pleasant 2019 Liberal campaign, which saw Trudeau apologize for a series of past appearances in blackface. The Liberals won in 2019 despite Trudeau, not because of him.

Why, then, are the Liberals still so Trudeau-centric in 2021? Everywhere you look in this campaign you see Trudeau, Trudeau, Trudeau. It’s Trudeau leading the attacks, Trudeau leading the policy rollout, and Trudeau filming the selfie videos. It’s as if the Liberals haven’t figured out the Trudeau of today isn’t the same weapon as the Trudeau of 2015.

And nowhere is Trudeau furthest from his 2015 self than on the question of feminism. This week, Trudeau was forced to play defence on behalf of Raj Saini, the two-term Liberal MP and candidate in Kitchener Centre, who stands accused of four instances of allegedly making unwanted sexual advances or inappropriate comments. Trudeau’s response? Some weak bafflegab about Saini participating in a process. It’s a marked difference to the Trudeau of yesteryear who, in the midst of the #MeToo fallout of 2018 declared that the women who make harassment allegations must be supported and believed.

Of course, one big thing happened to Trudeau on the feminism front between then and now: his own allegation of harassment—the fabled ‘Kokanee Grope’, which Trudeau brushed away with a now legendary line: “people experience things differently”. With that one answer, Trudeau’s moral authority on matters of harassment vanished. Prior to the Kokanee Grope, Trudeau cashiered Massimo Pacetti, Scott Andrews, Darshan Kang and Kent Hehr over alleged or documented claims of inappropriate behaviour. Following the Kokanee Grope, Trudeau authorized the 2019 candidacy of Liberal MP Marwan Tabbara, despite harassment allegations being raised against Tabbara in 2015. Tabbara was subsequently charged in another incident. And now Raj Saini. It turns out having the moral authority to act matters.

And even if the Liberals haven’t noticed the diminishment of their star, it appears the voters have. Trudeau’s personal popularity is down in recent polls, and Liberal canvassers are telling media outlets things like their constituents are ‘sick and tired’ of the Prime Minister. It’s an almost unimaginable circumstance given the historic intensity of Trudeaumania 2.0.

Nor does there appear to be time—or the will—to change course. The Liberals under Trudeau are Trudeau. And if yesterday’s rather insipid Liberal platform and weak attempt to import the Texas abortion ruling into Canada are any indication, coupling an increasingly unpopular leader to the tactics of previous wars is all the Liberals have left.