The Liberals' disregard for workers' rights

Tom Parkin: The Trudeau government ploughed over postal workers' well-established charter right to strike. It's been tried before and ends badly. 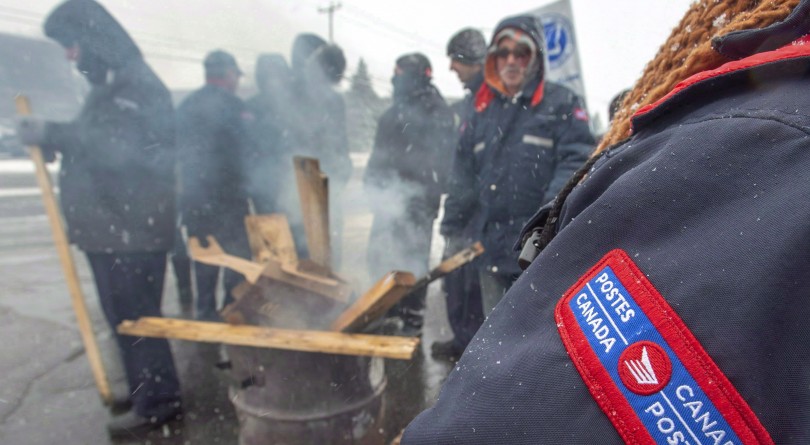 Canada Post workers spend the last hours on the picket line before the government ordered them to end their rotating strike on Nov. 27, 2018 in Montreal. (THE CANADIAN PRESS/Ryan Remiorz)

Charter freedoms don’t mean much if a politician with a majority government can take them away exactly when you need them.

And it’s an even deeper problem if a politician believes erasing charter freedoms is politically helpful for powerful people the year before an election.

Forget liberal talk about Canada’s respect for the rule of law. Late last month, Prime Minister Justin Trudeau’s government—like the Stephen Harper government before it—tabled a bill ending the charter-protected freedom of some Canadians to form and act in association. He legislated an end to rotating walk-outs by postal workers that had started on Oct.22.

Neither Harper nor Trudeau even bothered to use the ‘notwithstanding’ escape clause—they just ploughed right over charter rights, arguing public inconvenience.

This is now well-established in law. And now much-ignored in politics.

Now, the Supreme Court did recognize the freedom to withdraw labour isn’t absolute. The freedom of collective action isn’t protected if it would threaten the life, safety or health of another person. Police, fire fighters, paramedics, many hospital workers and others can’t strike.

But inconvenience isn’t a threat to life, safety or health. It’s true—in a free society, sometimes the trains don’t run on time. Sometimes your Christmas parcels will be late. But the alternative is far less attractive.

Yet knowing this legal history, Trudeau, after mail delivery was suspended for 24 hours in several cities and armed with his 39 per cent majority, tabled his bill ending postal workers’ act in association—as if the very life of the nation was at risk. He knew what happened to Harper’s law.

After Harper’s 2011 legislation, postal workers fought back in court. And in 2016, the Supreme Court ruled against Harper, finding his law removed workers’ freedom of association. That decision didn’t levy costs against the federal government, though it noted that costs could be awarded as a deterrent to future illegal government action. Perhaps the Court figured every dog is entitled to its first bite.

But as politicians keep biting workers, courts seem to be putting them on shorter leashes. Later in 2016, the Ontario Superior Court struck down a law by the Ontario Liberals that interfered in the collective bargaining rights of teachers. The Liberals’ decision cost more than $100 million to fix. And a decision of the B.C. Liberals to violate workers’ freedom of associations cost at least $330 million to fix after a Supreme Court’s struck down their law in late 2016. Fortunately, in both cases, the fix was to improve the classroom experience of Canadian kids.

No surprise, on Tuesday the postal workers’ union announced it would file a court case against Trudeau, just as it did against Harper.

Trudeau, it seems, will do nothing for Oshawa GM workers. His Fall Economic Statement served $16 billion tax in give-aways to corporations but not one nickel for Canadians pressed and stressed over the cost of everyday life. The Canadian Labour Congress’ campaign for pharmacare was put on the never-never plan. Sears workers were abandoned. Now liberals have shown their pick-and-choose attitude toward charter freedoms.

It may be the goal of liberal centrism to always flow with the power, reforming laws and institutions to meet its needs. But surely the labour movement was created to change the currents of power, not play in them. Whether, in the year leading to an election, the labour movement can effect that change is not clear. But the reason change is needed certainly is.