The Liberals need to rip off the Mark Norman Band-Aid

Andrew MacDougall: Dragging out L’Affaire Norman is turning what could have been a non-issue into a mess. The truth will eventually come out. 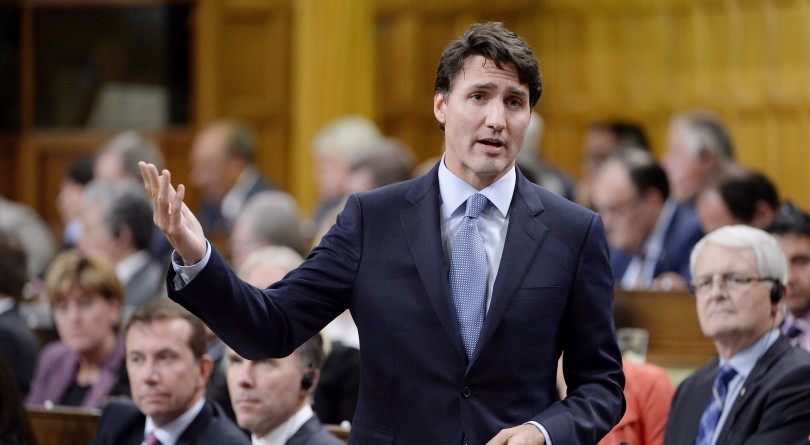 Prime Minister Justin Trudeau speaks during question period in the House of Commons on Parliament Hill, in Ottawa on Tuesday, Oct. 16, 2018. (THE CANADIAN PRESS/Adrian Wyld)

What are the chances the next election turns on whether a decorated Vice-Admiral was unjustly banged up by the Trudeau government  for leaking a story about the cabinet discussion surrounding a $668 million sole-source contract for a military supply ship?

Slim to none, in all probability.

That’s because, despite the ship’s hefty price tag, it’s not much of a pocketbook issue. But if the Liberals are thinking of riding their luck with Mark Norman, the Vice Admiral in question, they need to think again.

For one, L’Affaire Norman, despite being arcane (a primer can be found here), is the kind of palace intrigue Ottawa journalists crave; a juicy story about a big-money contract, broken cabinet confidences, an RCMP investigation and hints of a possible government cover-up. The story even involves one of their own, former CBC journalist James Cudmore, who went to work for the Department of Defence weeks after breaking the original story of the Cabinet’s supply ship deliberations.

Then you have the opposition, who are busy launching their own Norman invasion, an inquisition that has spilled more information into the public domain, material that is prompting further rounds of questioning.

In other words, Norman isn’t going away. And he’s starting to bite.

Watching Prime Minister Justin Trudeau stand up in the House of Commons to say the square root of nought 24 times on Norman this week certainly wasn’t an edifying experience. Here was Mr. Open and Transparent going off-brand by keeping schtum over his office’s refusal to release the material Norman’s defence says it needs to make its case that he’s the subject of a frame up.

A key part of the Norman defense is that dozens of others had the material he was accused of leaking. Media reports based on material filed in court by Norman’s team even suggest the original leak came from an employee of the Atlantic Canada Opportunities Agency, and not Norman. For its part, the RCMP says it’s still investigating.

Norman says that, if anything, he is guilty only of wanting military kit and ensuring the government stuck to the policy agreed at Cabinet. And then there’s the strange question of pressing charges over a leak, something that never happens in Ottawa despite the capital leaking like a sieve.

On the question of the release of relevant documents—which include emails to and from the Prime Minister’s Office and the Department of Defence—the buck stops with Trudeau. It is his call, and his alone, as to whether to waive cabinet confidence so this material can see the light of day. And right now Trudeau’s answer is a firm “no”.

This is the stonewalling the public will notice and question, even if they have only a vague understanding of what caused the original stink. Right now, the Prime Minister is acting like he has something to hide.

Trudeau is betting that deferring comment because the matter is before the courts will be enough for any interest in Norman to fade. It’s no safe bet.

One reason for that is Norman’s defense is being led by the razor-sharp and extremely media-savvy Marie Henein. You know, the one who got Jian Ghomeshi off. The protracted trial process itself will also throw up all manner of news pegs. In other words, there will be innumerable opportunities to feast.

That’s why the Liberals should go ahead now and release any and all documents relevant to Norman’s case. Take it from someone who knows (ahem, Duffy): if there’s a Band-Aid stuck to a sensitive spot, it’s better to rip it off in one go. Because the truth will eventually out.

The question then becomes: how big of a meal is it?

On the substance of the ship contract itself: a giant nothingburger. New governments hit pause on the previous government’s initiatives all of the time. Cabinet members then fight about what to do. Those conversations and decisions then leak. All the time. And the original contract went ahead as scheduled.

But then it’s never the crime, is it? It’s the cover up.

If you asked Trudeau now there is surely no way he’d repeat his the decision to order an investigation into the shipbuilding leak. The embarrassment he might have felt as a new Prime Minister over the leak of one of his first cabinet discussions is nothing like the anger he’ll feel if this drags on until the next election, or if he’s found guilty of political malfeasance. It’s time to take some medicine.

Because the host of questions that still need answering aren’t pretty, starting with why Trudeau won’t hand over all of the relevant documentation?

Why was Norman and his sterling record of service fingered, and not any of the dozens of others with the relevant material in hand, including some who also communicated with the media? Is there some unknown animus between Trudeau and Norman? Or between Norman and General Jon Vance, the Chief of Defence Staff, the man who ordered Norman’s suspension?

Continuing on, why did Trudeau predict in public—twice—that Norman would face court over the matter? And why did he do so before the RCMP had even seen fit to charge Norman?

Or is the silence over a more prosaic concern, namely that Treasury Board President Scott Brison—a Nova Scotia native—was lobbying on behalf of Halifax-based Irving Shipyards over the objection of his colleagues with direct oversight for the contract (something Brison denies)?

Whatever the answer, it won’t be worse than that same answer being dragged out over time, over Trudeau’s repeated objections.