The Liberals threaten an election. Scrutiny is out of order.

Andrew MacDougall: According to Liberal logic, the only thing the government has bandwidth for is spending vast sums of money through the pandemic 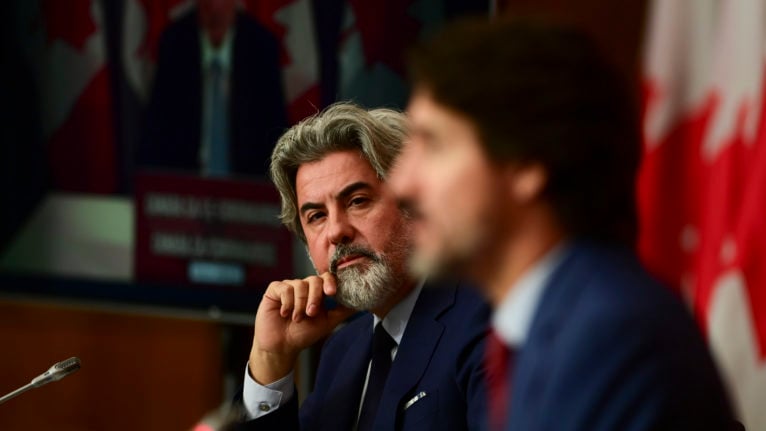 Rodriguez and Trudeau as they take part in a press conference in Ottawa on Oct. 16, 2020 (Sean Kilpatrick/CP)

You see, it appears the Prime Minister of Canada cannot walk and chew gum at the same time. And because he cannot masticate while in transit Trudeau is threatening Canadians with a schlep to the polls in the midst of a worsening pandemic.

At least this was the reasoning offered by Pablo Rodriguez, Trudeau’s hirsute House Leader, in response to a Conservative motion requesting the establishment of a special committee to scrutinize the government’s COVID-19 spending. Rodriguez lamented the motion meant that ministers and public servants would have to appear endlessly before Parliament as the government spent record amounts of money, when all the government had the bandwidth to do was spend records amounts of money. Put differently, Rodriguez ruled scrutiny out of order and threatened to take it to the people by making the motion one of confidence in the government.

Now, it takes a brave government to use a raging pandemic as an excuse to shield itself from scrutiny but the Liberals of 2020 aren’t exactly those fresh-faced beauties from 2015. The party that promised transparency and respect for Parliament are now going to extraordinary lengths to block the disclosure of documents relating to the Prime Minister’s third ethics enquiry.

READ MORE: Justin Trudeau, wondering what he has to lose

Well, Trudeau first prorogued Parliament after the investigations into WE at the various Parliamentary committees generated months of bad press culminating in the departure of his finance minister. Once Parliament was brought back, Trudeau instructed the Liberal MPs on the finance and ethics committees to filibuster for 10 and 11 hours respectively to avoid disclosing documents relating to the scandal. And now he’s sent Rodriguez out to threaten an election over said documents. It’s almost enough to make you wonder what’s in them.

However, having mismanaged my share of government scandals, I can certainly picture a scenario in which there isn’t a great gory goblin buried in the documents. Sometimes the instinct in government is simply to frustrate on process rather than suffer the indignity of another media hit on substance. And when the media isn’t nailing you over your abuse of Parliament—and the criticism feels muted now—you can certainly picture getting away with it, so why not deploy the Pablo to issue a ludicrous election threat?

Whether that threat would produce an election is another question. Should the motion pass (a big if given the NDP’s dire financial straits), it’s not clear Governor General Julie Payette is feeling as charitable to the government on WE as the NDP. Then again, the government is currently overseeing an investigation into the (reportedly toxic) workplace environment over at Rideau Hall, so Payette may not feel she is able to reject a request for dissolution, even if the House has recently expressed confidence in the government’s Throne Speech. Talk about a right royal mess.

In a sense, the government is to be pitied; it’s no fun having Pierre Poilievre after you day after day. But the opposition are well within their rights—particularly in a minority Parliament—to ask tough questions about spending, especially spending that is going to the well-connected who are friends or associates with the principals of said government.

The government’s line—over and over again—is that Canadians are more focused on the government’s response to the pandemic than they are on the WE scandal. And in the current environment, they’re probably right. Why not, then, test that proposition by being accountable to Parliament, releasing the documents, and letting the opposition bang on about them? Using Liberal logic, wouldn’t this further weaken the standing of the opposition in the eyes of voters?

Alas, it won’t happen. Because the Prime Minister has figured out that he doesn’t need to walk and chew gum. Trudeau knows he can spit the NDP out of his coalition whenever it suits him, and then step all over them without slowing down his walk.