The loneliness of Donald Trump

Scott Gilmore: No longer able to command fear or respect, the U.S. president is suddenly very isolated and his White House a sideshow 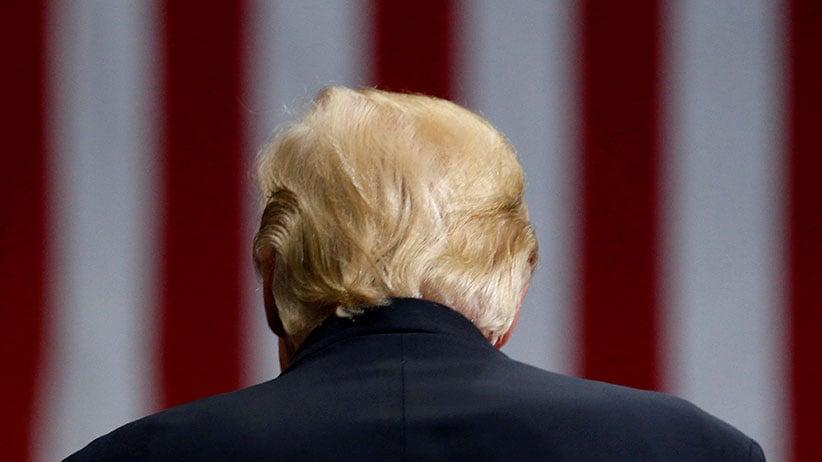 Ronald Reagan was known as the “Teflon president”. His administration was mired in dozens of scandals, the most memorable being the Iran-Contra affair. But nothing stuck to Reagan—regardless of the misdeeds of his appointees, the public was loath to blame The Gipper. It almost seemed like he was just standing on the sidelines, watching the mud wrestling from afar.

After six months, Donald Trump’s administration has been remarkably scandal-free, by comparison. It is not the people around him, but the president himself who is blundering from one mess to another, often several times in a single day. And everyone blames him. Even his staff complain that the latest misstep was entirely Trump’s fault. Unlike the Reagan years, the president is rolling around in the muck while friend and foe alike stand on the sidelines watching in dismay.

And yet, covered in mud, picking it up in little handfuls and smearing it on his own face, Trump has somehow managed to enjoy almost unwavering conservative support since he won the nomination. During that time, even in the face of bitter personal attacks, Republican politicians continued to stand behind the president. And his voters have shown equal loyalty. According to the latest numbers from Gallup, 79 per cent of registered Republicans approve of the job he is doing, compared to 29 per cent and seven per cent among independents and Democrats, respectively. But things are beginning to shift, rapidly.

READ MORE: This is the real Donald Trump, loud and clear

After what many observers described as “Trump’s worst week” (so far), the president is suddenly appearing very isolated. For the first time, following his Charlottesville comments, all of the GOP leadership openly criticized the president. Before that, they had already blocked Trump’s ability to make recess appointments and all but abandoned his legislative agenda. And Republican voters, although they still support Trump, have notably softened, the percentage who “strongly approve” falling 14 points.

The industry leaders who were participating in the president’s American Manufacturing Council and Strategy & Policy Forum effectively resigned en masse. Interestingly, the stock markets also appear to have walked away from the president, in so much as they are no longer discounting companies that earn his wrath. Meanwhile, as the NAFTA renegotiations launch, the private sector lobby and state governors have lined up on the Canadian side of the table, against the Trump administration.

Inside the White House, staffers who used to just stab each other in the back are now turning on the president, accusing him of being the incompetent author of his own misfortune. Even the Svengali behind the throne, Stephen Bannon, is dismissing his boss in interviews. Many from his inner circle have now resigned or been fired, including former campaign managers Paul Manafort and Cory Lewandowski, and White House staffers Mike Flynn, Sean Spicer, Reince Priebus and Anthony Scaramucci. The leadership of all five branches of the Armed Forces have taken the unprecedented step of issuing statements implicitly condemning their commander-in-chief’s intolerant views.

RELATED: Donald Trump is hurtling the world towards crisis. He needs to go.

Right now, Trump is more isolated, and as a result less effective, than any president has been in recent memory. (Even in the midst of his impeachment, Bill Clinton enjoyed broad support with the public and his party.) You could argue Trump’s sudden loneliness is due to a cumulative effect, each scandal and slur added on to the pile until his allies could no longer take it. But I would argue it has more to do with fear.

When Trump came to office, everyone was scared of him. Senior Republicans worried that he could destroy their mid-term reelection hopes with one tweet. Likewise, industry titans bent over backwards to avoid his critical gaze. But, after six months, it is clear presidential attacks are not only survivable, in most cases they’re utterly harmless. The calculus has shifted; people now figure the benefits of opposing Trump far outweigh the negatives of supporting him.

Trump’s new isolation, however, may not change much. The president was already mostly ineffectual–you can’t derail an agenda if it screeched to a halt months ago. And Trump himself is not going to change in the hopes of regaining the trust of his erstwhile allies. He has spent decades proving personal re-invention, even basic self-control, are beyond him.

But inevitably, this administration will face a real crisis—a large terror attack, or the results of the Russia investigation—and when that happens the president’s isolation will dramatically reduce the odds of his political survival.