Andrew MacDougall: The Liberals' about-face on refugees, hidden away in an omnibus bill, saws at a pillar of their core identity, to say nothing of their brand promise 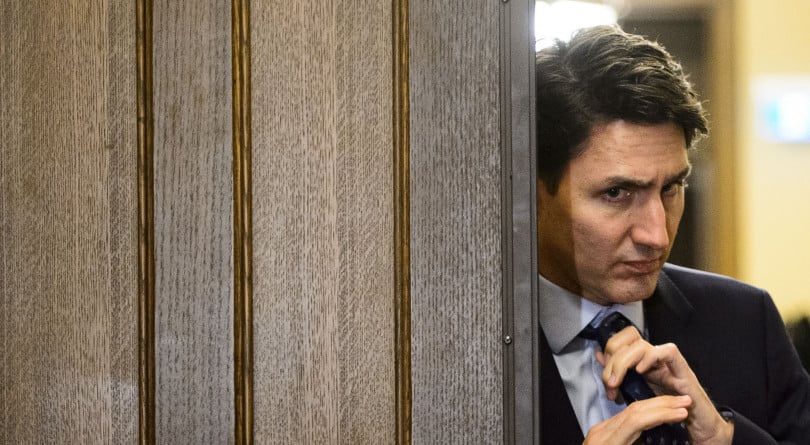 Trudeau leaves a cabinet meeting on route to vote in the House of Commons on Parliament Hill in Ottawa on Tuesday, April 9, 2019. (Sean Kilpatrick/CP)

Hark! Word comes from Ottawa of the vaunted channel change from SNC-Lavalin!

With everyone busy rubbernecking the multi-car, highway-closing SNC-Lavalin pile up, Finance Minister Bill Morneau went ahead and tabled his budget implementation bill. And buried in that 392-page (!) behemoth was a change to the Immigration and Refugee Protection Act that would make it harder to claim refugee status in Canada.

To take things in order: 1) yes, there was a federal budget this year; 2) yes, it is being jammed through the House via an omnibus bill (which the Liberals promised never to do); 3) yes, omnibus legislation is how Liberals tucked deferred prosecution agreements into the criminal code for SNC last year; and 4) the Liberals are now massive hypocrites.

Trudeau’s vaunted “Welcome to Canada” poster is now festooned with giant brand-damaging caveats: If you, dear asylum seeker, have opened a claim for refugee protection in another country, have already made an unsuccessful claim in Canada, been deemed inadmissible because of your criminal record, or been granted refugee protection elsewhere, your claim is now ineligible for consideration.

And if all of that sounds like common sense to you, welcome to where federal and provincial Conservatives have been for the past three years. Or, as the Liberals used to call it: being un-Canadian.

READ MORE: Because it’s 2019: A look back at Trudeau’s original cabinet

The budget bill sleight of hand on asylum claims follows the Liberals’ earlier fold on the Safe Third Country Agreement, which they are now looking to revise in negotiations with the United States, another step the Conservatives have been urging for the better part of two years.

“I can tell you we’ve been working very hard over the past several months to significantly reduce the number of people who are crossing our borders irregularly,” Conservative Minister Bill Blair told reporters. “There’s a right way to come to the country to seek asylum and/or to seek to immigrate to this country, and we’re trying to encourage people to use the appropriate channels and to disincentivize people from doing it improperly,” Blair added.

Blair is, of course, a Liberal. He just sounds like a Conservative, based on the volte-face evidence; 40,000+ “irregular” asylum claims from the United States will do that to you. The Liberals have been thoroughly mugged by the reality of this year’s election.

And what of the mountains of prior Liberal talk of principles, compassion and openness? One presumes they’re buried in the backlog of asylum claims Trudeau said the system was equipped to handle.

The step change in direction on entry to Canada has certainly upset the cast of immigration and asylum advocates who threw themselves at Trudeau’s feet after Trudeau threw open Canada’s doors in the midst of the 2015 refugee crisis in Europe.

Janet Dench, executive director of the Canadian Council for Refugees, anticipates a Charter challenge to Trudeau’s proposed reforms, while Maureen Silcoff, chair of the Canadian Association of Refugee Lawyers’ litigation committee, bemoaned the “degraded” nature of the system being proposed. “This is really a devastating attack on refugee rights,” Dench concluded.

These criticisms—to say nothing of the changes themselves—should terrify the Liberals who, as they never fail to tell us, are the party of the Charter of Rights and Freedoms. One wonders whether the lemmings on the Grit backbench were even made aware of them. It certainly explains why the changes were buried in a budget bill and not debated in the harsh light of day. Opaque ways, my friends.

Refugee advocates will now add their names to the rather long and distinguished list of disappointed Liberal stakeholders: electoral reform advocates, transparency gurus, balanced-budget believers, sticklers for the rule of law, Indigenous rights groups and environmentalists, to name a few.

But the criticism from the asylum crowd is of a different calibre, one that will leave a mark. The Liberals are sawing at a pillar of their core identity, to say nothing of their brand promise. Liberals of the Trudeau vintage didn’t get into politics to be a Tory on asylum and immigration.

Now that the media have spotted the change we shouldn’t be surprised if Trudeau kicks Jody Wilson-Raybould out of caucus again to change the channel. Or, barring that, give another $12 million climate gift to a wealthy grocery retailer with a history of price-fixing a food staple. The point being, the longer the discussion stays on the asylum about-face the more Trudeau will sink.

And with Liberal support continuing to bleed every which way, Trudeau could yet have further to fall. Indeed, bar the carbon tax, it’s not clear what the Liberals propose to stand on in the next election. Well, other than power for power’s sake, which has always been the Liberal proposition.

But it wasn’t Trudeau’s; he promised a different Liberal Party. The fact that Michelle Rempel could now be the Liberal spokesperson on immigration wasn’t a part of the vision he sold to Canadians.

But on asylum, as with Trudeau’s other disappointments, it turns out that #WelcomeToCanada was #OnlyAMarketingSlogan.