Andrew MacDougall: It was Justin Trudeau making bad calls every step of the way. He is the sole author of his government’s misfortune. 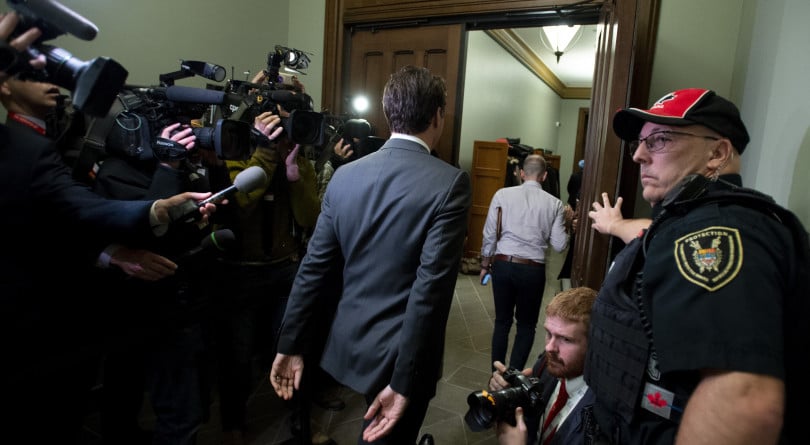 Trudeau arrives for a caucus meeting on Parliament Hill in Ottawa on Tuesday, April 2, 2019. (Justin Tang/CP)

The Liberals and their surrogates would like you to know they’re sick and tired of the  media’s continued scrutiny of SNC-Lavalin, a.k.a. the great vampire squid wrapped around the face of Justin Trudeau’s government.

“Could someone set up a [Jody Wilson-Raybould] & [Jane Philpott] channel so any of us who think we’ve heard them offer EVERY POSSIBLE REITERATION OF THE SAME POINT can get other news,” tweeted Bruce Anderson, long-time politico and former CBC At Issue panelist.

Twitter user ‘Neil Before Zod™’ was in a similar mood: “If I seem snarkier than usual, it’s because I am. Angry at the echo chamber of bias that passes for journalism in Canada today. Angry at the lack of substantive policy debate, and the take over #cdnpoli by the Jane and Jody show.”

Eight weeks of non-stop drubbing will do that to you, I suppose.

The proximate cause of both men’s anger was the first series of interviews with  Wilson-Raybould and Philpott post-ejection from the Liberal caucus.

Wilson-Raybould was also busy refuting the latest anonymous smear launched her way by the PMO: that she had set a condition on the appropriateness of a deferred prosecution agreement for SNC-Lavalin as a condition of reconciliation with Trudeau.

READ MORE: Jody Wilson-Raybould: ‘The Liberal party is not something I understand anymore’

“I have never and would never seek to interfere with the exercise of prosecutorial discretion by the attorney general of Canada,” Wilson-Raybould replied, on the record. But by then, of course, the originally story had already consumed the day.

For her part, Philpott was busy reiterating her support for most everything Justin Trudeau was doing, but for his repeated intrusions into the SNC file. All it would have taken to keep her sweet, Philpott explained, was an apology from the Prime Minister and a pledge not to do it again. Which sounds as unreasonable as mum and dad telling their cranky toddler to eat his vegetables.

But back to the cranky reactions. And while I’m not in the habit of quoting anonymous Twitter users, Mr. Neil Before Zod™ has close to 10k followers, including one Gerry Butts, and clearly has a brain. If anyone is talking smack about Trudeau on the Twitter, Mr. Neil is also there to lead the defense. His reaction is usually a representative sample of the broader Liberal Twitter brigade. If he’s hurting, they’re hurting.

But they’re directing their anger into a black hole. Shooting the messenger only martyrs the messengers. And the next time telling a journalist what the ‘real’ story is works will be the first. The Liberals are whistling into a Category Five hurricane.

Instead of barking at the doctor for diagnosing the disease the Liberals should instead thank Wilson-Raybould and Philpott for highlighting the pathology. Because there is one person to blame for the eight weeks lost to the oozing SNC-Lavalin scandal: Justin Trudeau.

It was Justin Trudeau’s advisors who took meeting after meeting with SNC-Lavalin as the company repeatedly begged for a deferred prosecution agreement (DPA) regime in Canada.

It was Justin Trudeau who acquiesced and stuffed the legislation creating DPAs into the 2018 budget.

It was Justin Trudeau who told Jody Wilson-Raybould to find a solution when the independent Public Prosecution Service of Canada rejected SNC’s application for a DPA.

It was Justin Trudeau who sent adviser after adviser after Wilson-Raybould and her advisers, including his advisers—Elder Marques and Mathieu Bouchard—who met with SNC more than anyone else.

It was Justin Trudeau that was in a mood to get the DPA done, and Justin Trudeau who sent Michael Wernick over to send a message that Wilson-Raybould’s job was on the line if she didn’t deliver one.

If Liberals want to be mad at anybody, they should direct their anger to Justin Trudeau, who is the sole author of his government’s misfortune.