Peter Shawn Taylor: With little concern for fiscal responsibility and a total avoidance of hard choices, each of the party platforms offer slim pickings 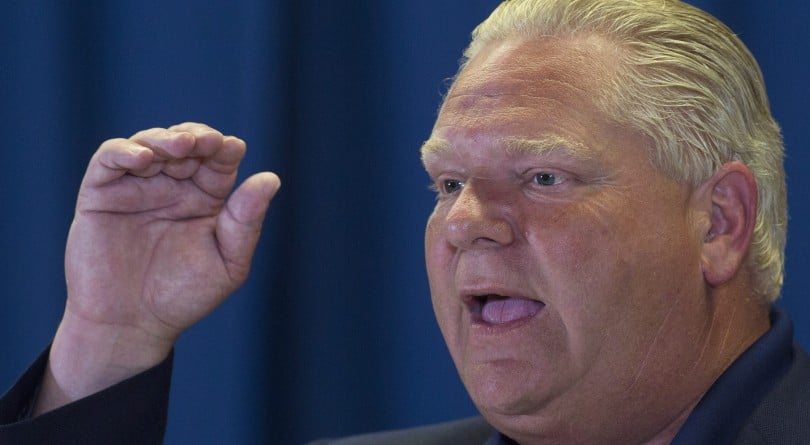 Before European explorers arrived on Easter Island in the Pacific Ocean, young men representing various tribes from the island would gather on the southern shore for a dangerous swim to the nearby islet of Mota Nui to fetch bird eggs. The first one to make it back to the main island with a tern egg strapped to his head—after surviving the rocky terrain, treacherous currents and man-eating sharks—and then climbed a nearby volcano was declared the winner. And as a reward, the leader of the successful competitor’s tribe would be declared ruler of the island for a year. Until the next Birdman challenge was held.

In making their decision on June 7, Ontario’s electorate sadly lack the precision of a tern egg challenge. Without the ability to simply select the first person to scale the cliffs of Rano Kau with an intact egg on their head, voters must instead try to make informed judgments based on the parties’ platforms and their opinions of the leaders and candidates.

And for anyone concerned about fiscal stability, budgetary restraint or the size of government, the view from the platforms is worrisomely grim. Despite the province’s $325 billion-and-rising debt, each of the three main parties seems determined to avoid difficult tasks or hard choices. Where’s the Birdman (or Birdwoman) of Mota Nui when you need them?

Elections are often considered referendums on the economy. And from an economic perspective, things in Ontario are not so grim that an untutored visitor might consider the incumbent party unelectable. GDP growth is solid if not spectacular, unemployment is at historic lows with employment on the rise, and consumers are spending. If not for an overwhelming sense of voter fatigue and grotesque mismanagement of the Hydro file, Premier Kathleen Wynne’s Liberal government might have a fighting chance.

In the wake of the Great Recession, Wynne’s Liberals dallied with fiscal restraint and brought the provincial budget briefly and properly into balance two years ago. Given their desperate polling numbers, however, the Liberals have since abandoned all pretense to fiscal sobriety and thrown open the bar.

Wynne’s strategy to stave off defeat now entails bribing voters with such goodies as free pre-school, free post-secondary tuition, cheaper prescription drugs, cheaper dental care and higher minimum wages (another benefit paid for by someone else: in this case, business owners). Given this spending binge so soon after having balanced the budget, the Bank of Montreal’s economics shop figures the province has created for itself an instant structural deficit of at least $6 billion.

Such a move makes no sense from an economic point of view. Whether these are Good Times, or merely Okay Times, we’re likely at the top of the business cycle. With so many risks in the offing—from rising interest rates to the trade-threatening policies of Trump’s America to a potential downturn in the housing market—things are much more likely to get worse than better. And if so, a prudent provincial government should be paying down debt and getting its fiscal house ready for the next rainy day, as has been the case next door in Quebec. Instead, the governing Liberals are engaged in a fiesta of unsustainable spending.

While a Liberal victory on June 7 now seems as remote as Easter Island, given Wynne’s recent capitulation, an NDP victory is well within the realm of possibilities. And NDP leader Andrea Horwath’s platform threatens to do even more damage to the provincial finances. Horwath’s platform, “Change for the Better”, gives full throat to the party’s broad socialist tendencies.

Beyond all the freebies offered by Wynne, Horwath ups the ante with free dental care, free pharmacare and free child care. She will buy back Hydro One, re-privatize road maintenance and lard on more development-killing rent controls. She even talks of regulating the price of children’s toys in the name of gender equity. Ontario could soon become the province where markets go to die.

And while Horwath’s plan will push taxes deep into confiscatory territory—the top combined federal/provincial income tax bracket would hit 55.5 per cent—her platform also predicts deficits as far as the eye can see. Program spending is slated to rise by more than 17 per cent over the next four years. And there’s that small matter of a $1.4 billion math error in the NDP’s initial version of its fiscal plan. Irony or foreshadowing? You be the judge.

Finally, we come to the platform of Doug Ford’s Progressive Conservatives. Following his victory in the PC leadership race this Spring, Ford vowed to focus his energies on five basic promises. “People want five simple points that affect their lives every day,” he said.

But where Harris’s policy objectives were tightly focused on reducing the size of government, Ford’s populist instincts have him wandering all over the map. Under which of his five categories, for example, does his commitment to “actively explore” a mega-billion dollar high-speed rail line belong? And while everyone appreciates lower taxes, why exempt Royal Canadian Legion halls from property taxes? The platform also lacks any of the data-heavy tables or charts illustrating how these promises will ultimately produce a balanced budget, as were at the heart of the Common Sense Revolution.

On the other hand—and this might be akin to a drowning man grasping at whatever happens to float by—Ford’s plan does promise to “return to a balanced budget on a responsible timeframe.” There are also calls for value-for-money audits and a comprehensive examination of the province’s books. In this election, the Ford Tories are the only party talking, even half-heartedly, about reining in spending and tackle the debt.

Unfortunately Ford refuses to treat voters as adults who can make intelligent choices regarding the allocation of scarce resources. If the Liberals have bequeathed the province a brand-new $6 billion structural deficit, any party committed to “solving the deficit problem” should recognize a concomitant duty to explain to voters/taxpayers how and when this will be accomplished. Yet Ford promises no layoffs and repeatedly claims he will not reduce existing services. This leaves a sizeable credibility gap. And where’s the timeline for returning the budget to balance?

To be fair, Ford has only been on the job for a couple of months. And he was forced to discard his predecessor’s platform because it didn’t align with his own policies, particularly on carbon taxes, which means he’s had to build his own platform on the fly.

He has mostly avoided big new government mandates such as free pharmacare or dental care; his child-care policy is a sensible tax credit that respects parental choice. And his costliest campaign sweeteners are tax cuts, which can spur additional economic activity and are more easily reined in as circumstances dictate, unlike big new social programs. Plus, the campaign material of local PC candidates often suggests a greater fixation on fiscal matters than is evident from the main campaign. Thin gruel, perhaps. But gruel nonetheless.

For voters worried about fiscal matters such as the deficit, debt and overall size of government, the coming election offers rather slim pickings. With Doug Ford as the least slim option.