The Oscar machine Harvey Weinstein built ticks along, with only a few dings

Opinion: With a few exceptions, the first Oscars of the #MeToo era largely awarded, or was otherwise silent about, men variously accused of abuse 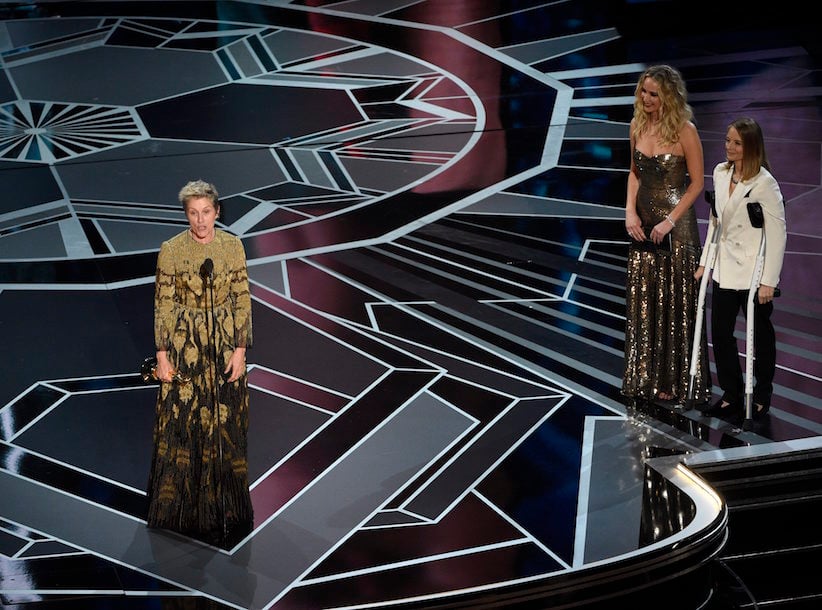 Frances McDormand accepts the award for best performance by an actress in a leading role for “Three Billboards Outside Ebbing, Missouri” as Jennifer Lawrence and Jodie Foster look on from right at the Oscars on Sunday, March 4, 2018, at the Dolby Theatre in Los Angeles. (Photo by Chris Pizzello/Invision/AP)

If one line is destined to endure from the interminable, self-proclaimed, self-congratulatory ad for Hollywood that was the 90th Academy Awards, it’s the one Frances McDormand uttered after she stomped to the stage to receive her Oscar for Best Actress: “If I fall over, pick me up because I have some things to say.” And then she said them, providing a much-needed blast of oxygen to the first Academy Awards of the #MeToo era. On a night that should have been an exorcism of the abuses of people like Harvey Weinstein, the general silence on those issues was a sobering reminder that, while he is gone, the machine he helped build is ticking along, albeit with a few dings. But the day after a night that showcased and awarded men accused of abuse in various forms, it’s safe to say no one is asking whether #MeToo has gone “too far.”

In retrospect, there’s little surprise that the Academy of Motion Pictures Arts and Sciences, bless their non-diverse souls, paid little heed to a movement calling for the detonation of the very power system it dominates. After all, we’re still awaiting the century when it will properly offer non-gendered acting categories. The Academy may have launched a “diversity campaign” in 2016, but only 28 per cent of its members are women (a higher percentage of female representation than Canada’s Parliament, it should be pointed out), with people of colour comprising a mere 13 per cent.

For years, the Academy was a power system dominated by Weinstein—at least, until Oct. 5, 2017, when the New York Times published the first bombshell investigative report into the producer’s longstanding abuse of women and other behaviour that derailed many careers. Until then, the Academy Awards was Weinstein’s big night, with winners paying him fealty from the stage. Though his power was fading, he still wielded clout over the star-making machinery—which in turn allowed him to get away with abuse for decades. Central to that power was his rewriting of the rules for winning awards: Weinstein threw big, schmoozy events, engaged in rumour campaigns, and was known for relentless cold-calling. It worked: the Weinstein brothers’ movies won more than 300 Oscar nominations over 25 years.

Any early fears or anticipation that #MeToo activism would disrupt the Oscar red carpet or ceremony this year now seem laughably naive; few are willing to shoot their cash cow. E! host Ryan Seacrest, a red carpet staple, was cited as an obvious target after a story ran in Variety last week revisiting accusations made by his former personal stylist that he assaulted and abused her. #MeToo founder Tarana Burke, among others, called for Seacrest to be dropped from the broadcast. Instead, E! network merely put a 30-second delay on its feed to avoid embarrassment. The result was a tense Seacrest who didn’t score as many A-lister interviews. Yet he remained unscathed, save a seemingly karmic burn from actor Taraji P. Henson that went viral: “The universe has a way of taking care of the good people,” she told Seacrest with a smile. “You know what I mean?” (She later said the remark was  “misconstrued.”)

The presence of host Jimmy Kimmel offered another clear sign that the Academy didn’t want disruption. Hiring the the same guy—emphasis on “guy”—who hosted the year before signalled a desire for continuity with pre-#MeToo Hollywood. Yes, Kimmel can be outspoken for a network late-night host, but it’s not as if there isn’t a long list of brilliant, funny women to call upon (Tiffany Haddish and Maya Rudolph, the night’s best presenters, are obvious prospects). Here again, the Oscar hosting duty mirrored a lack of female representation in Hollywood: in 90 years, only 16 women have hosted, with 14 of those serving as as co-hosts. Only Whoopi Goldberg and Ellen DeGeneres have hosted solo, though not since 2014.

The Academy kicked Weinstein out, Kimmel reminded the crowd, while pointing out such expulsion happened only once before—to an actor who loaned out screeners. Meanwhile, the names of active Academy members accused of sexualized violence—Roman Polanski, Woody Allen, and Bill Cosby, for starters—hovered overhead, left unsaid. #MeToo was framed by Kimmel as being about men’s behaviour: “This is the year men screwed up so badly that women began dating fish,” he said, referring to The Shape of Water, which later won Best Picture. It’s a cute line. But 2017 wasn’t the year men “screwed up”; it was the year women, abetted by mainstream journalism, finally said “enough” to systemic abuse and discrimination.

In a decided irony, Kimmel’s only mention of violence was directed at a woman: the former skater Tonya Harding, whose story was the basis for I, Tonya. “Whose kneecaps did Tonya Harding have to break to get this casting [of Margot Robbie]?” Kimmel joked. Anyone who’d seen the movie knew Harding didn’t break a rival’s knee-caps or even have any part in the plot to do it.

The focus was on feel-good, or a “night for positivity,” as Kimmel put it, adding that things are “changing for the better.” The host encouraged winners to use the podium to speak up on issues like the “March For Our Lives” for gun control, then told them not to by dangling a big, shiny, distracting object: the prize of a jet-ski to the person who gave the shortest speech. It was a clever gambit—telling people that not drag out a message, political or otherwise, while creating a running gag. Someone thought it was clever to use the remarkable Helen Mirren, famously “hot” in her 70s, to serve as a model to show off the jet-ski, a bit of virtue-signalling by a famously ageist industry. Some ordinary guy performing the same function would have been funnier.

It was a night of nostalgia, framed as “90 Years of Dreams” featuring clips from memorable, beloved movies with such earnest voiceover lines as “Hollywood: a machine that generates empathy.” We were warned by the ceremony’s co-producer Jennifer Todd, who promised an “entertaining” production, a “giant commercial for the movie business, which we all need to keep going.” Early on, reporters in the press room were asked to keep any questions “directed to what was happening this evening,” not on issues like #TimesUp. 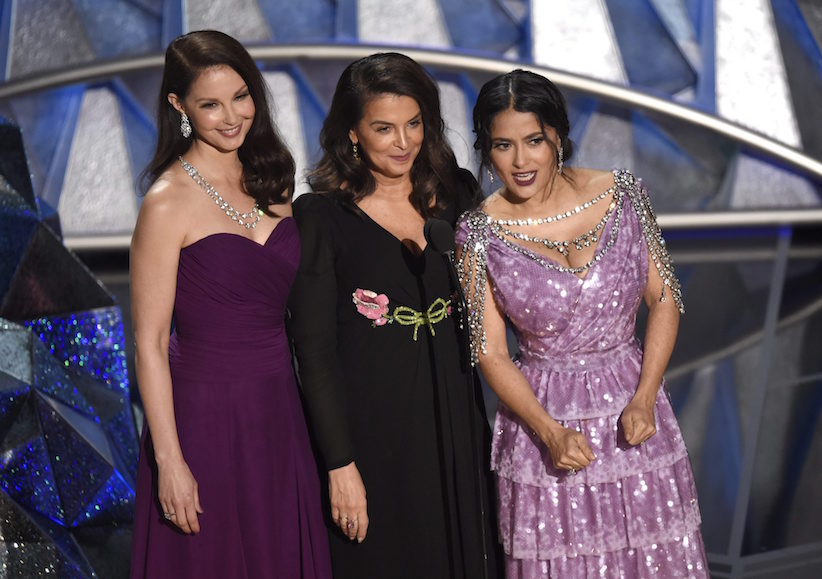 From left, Ashley Judd, Annabella Sciorra and Salma Hayek speak at the Oscars on Sunday, March 4, 2018, at the Dolby Theatre in Los Angeles. (Chris Pizzello/Invision/AP)

That wasn’t difficult. Almost all the acceptance speeches were defiantly non-political. #MeToo was highlighted in a sole segment celebrating pioneers, as well as the importance of inclusion and diversity. It was introduced by Weinstein’s worst nightmare: the trio of Ashley Judd, Annabella Sciorra, and Salma Hayek, all who had previously spoken out about being abused by the producer. “A mighty chorus is finally saying time’s up,” said Judd. Sorvino spoke of “this possibility of the status quo not being the status quo any more.” In one clip, actor Geena Davis noted people wrongly thought the 1991 movie Thelma and Louise would herald a turning point in attitudes toward women in the industry. “This is that moment,” she said hopefully.

Yet only minutes earlier, former NBA star Kobe Bryant, arrested for rape in 2003, was awarded Best Animated Short for Dear Basketball. Criminal charges were dropped when his accuser declined to testify; a civil case was settled out of court. Later, Bryant admitted rape had occurred in  a statement saying he realized wasn’t consensual for the complainant. Gary Oldman, recently accused of assault by an ex-wife, took the gold statue for his portrayal of Churchill in The Darkest Hour. The wins laid to rest any thinking that James Franco had been snubbed in the nominations for his work in The Disaster Artist because of charges of assault and harassment made against him.

Still, it’s impossible to watch the Oscars without also being reminded of movie magic, of the power that the big screen possesses alone, one that in turn shapes cultural norms. And here the movies honoured clearly showed change and depth—whether it be Get Out,  a brilliant satire of race relations in America, the underappreciated Mudslide, or I, Tonya, Lady Bird and Three Billboards Outside Ebbing, Missouri, three movies that dealt with the complex, primal bond between mothers and daughters.  There were some firsts on Sunday; Jordan Peele became the first black screenwriter to win Best Original Screenplay for Get Out, and Daniela Vega was the Oscars’ first openly transgender presenter. Older women were also given the spotlight, be it Eva Marie Saint at age 93 or 89-year-old legendary French director Agnès Varda up for the Best Documentary for Faces Places.

But it was also a reminder that an industry routinely called “liberal” is often retrograde and rife with double standards. One ad on E!’s red carpet broadcast was for the upcoming comedy Blockers, about a group of parents trying to foil their daughters’ pact to lose their virginity at prom. “I can’t even hug my daughter anymore without feeling her boobs,” one male character says. Another laughs when asked if his father tried to block him from losing his virginity: “He was high-fiving me.” Yes, this movie is being released in 2018.

Certainly, there was was no unscripted activism or protest even approaching the 1972 ceremony, when Sacheen Littlefeather declined the Best Actor Oscar award on behalf of Marlon Brando, who’d boycotted the event in protest Hollywood’s depiction and treatment of American Indigenous people. Forty-six years later, it was gasp-worthy when presenter Emma Stone referred to those “these four men and Greta Gerwig created their own masterpieces this year” before handing the Oscar for Best Director to Guillermo del Toro. Yet clearly there was appetite in the crowd for change and protest, seen in the thunderous response to the song “Stand Up for Something,” performed by Andra Day and Common, who shared the stage with ten activists.

Something approaching catharsis finally came when McDormand, who refreshingly eschews the anodyne glam seen at award shows and showed up without makeup, channelled a blunt, no-nonsense, homesteader spirit. In a speech that notably featured the first, and only, mention of the word “feminist,” the Three Billboards Outside Ebbing, Missouri actor broke the rules when she asked all of the female Oscar nominees to stand, making it about them all, not just her. “Look around, everybody,” she instructed. “Because we all have stories to tell and projects we need financed.” McDormand also took a nice dig at Weinstein’s M.O. of meeting actresses in hotel rooms, naked beneath a bathrobe: “We will come to your office—or you can come to ours.”

But even that speech was a reminder that behind the cultivated illusion, Hollywood is a workplace. Show business is a business. What sells and what audiences want is changing far faster than the Academy is, evident in the runaway success of Black Panther; Kimmel put it in financial terms, pointing out that each of the nominated films “got crushed by Black Panther this weekend.” Next year, no doubt, the movie will be honoured as the industry that shapes and reflects the broader culture slouches toward enlightenment—or, hopefully, a better illusion of it.