The path to a one-term Doug Ford

Stephen Maher: The Ontario premier's bull-in-a-china-shop routine won't just turn off swing voters, it's shaking the confidence of his own people 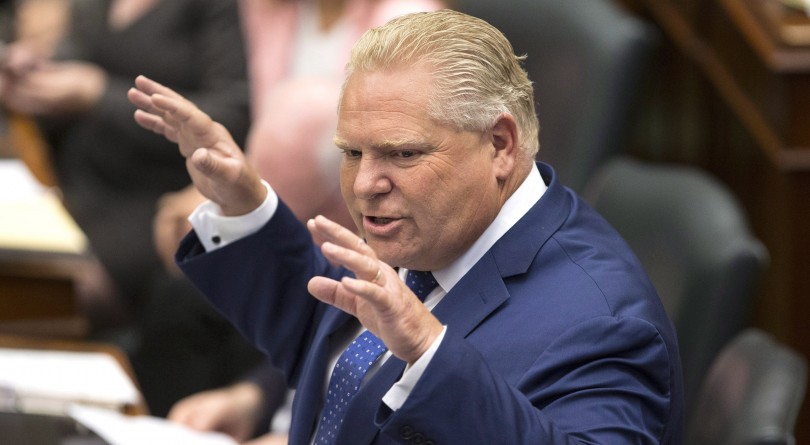 Ontario Premier Doug Ford speaks during Question Period at the Ontario Legislature in Toronto on Sept. 12, 2018. (THE CANADIAN PRESS/Chris Young)

Doug Ford faced his first test this week, and although we won’t see his report card for a long time, there is no reason to think he did any better than he did in his unsuccessful academic career.

Ford is a bull in a china shop, a disruptive Yosemite Sam of a politician, someone who shoots off his mouth first and thinks later.

Ontario voters elected him in spite of that, because the other options were unappealing, not because they want a loudmouth blowhard to use the legislature to settle scores with his political rivals.

Polling shows that many people voted for him not because they are Ford Nation loyalists, but because they were sick to death of the Liberals and afraid of giving Andrea Horwath and the unions the keys to the treasury.

Given the nose-holding dynamic of the election that brought him to power, Ford would have been well-advised to move carefully around the china shop and take counsel from cooler heads.

Instead, a month after taking office, he introduced a bill to cut the size of the Toronto city council.

Because of a historical quirk of our colonial past, cities have no constitutional standing, and exist only in the legislative framework imposed on them by the provincial governments, so Ford has a legal right to do what he did. It turned the city against him, though, because Ford blew up a long, expensive and bureaucratic process of redistricting that city councillors had just concluded, and he did so after the election had started.

It is not necessary to have an opinion about the most desirable size of Toronto city council to know that Ford did something improper.

He did it carelessly, without consultation, to settle scores at city hall and in several regional councils where political rivals were running.

He could not have been more dismissive of the concerns of the people whose lives he disrupted, denouncing the left-wing politicians seeking office in Toronto as if every sensible person could see that he was doing something helpful by changing the rules on them.

Last week, when Superior Court Justice Edward Belobaba decided that Ford’s bill somehow violated the Charter of Rights and Freedoms, Ford denounced him as an unelected judge, an argument that was greatly weakened by his failure to know who had appointed him.

Ford announced that he would use the notwithstanding clause to suspend the judge’s decision, the first time an Ontario premier has done so, earning rebukes from lefties but also from retired conservative politicians Brian Mulroney and Bill Davis.

It’s hard to know what is the worst consequence for the Ford government from this display of boorishness.

Firstly, he has infuriated his opponents, which he seems to relish. When Horwath pressed him in the House, he even named two left-wing Toronto councillors he dislikes.

This is foolish because it makes it clear to voters—including those who held their noses while they voted for him—that he is motivated by malice, not  a desire to properly oversee the governance of Toronto. And there are things his opponents can do to make Ford’s life difficult, as he is surely to learn, likely in the next election when he watches the returns come in from Toronto.

After Mike Harris forced amalgamation on Toronto in 1998, the Progressive Conservatives were shut out of the city for 20 years. Now Torontonians have given the party another chance, and it is again attacking their municipal government.

The city clerk is warning that it may not even be possible to run the election next month given the legal chaos. Thanks, Premier Ford!

Secondly, Ford is wasting time and energy on an issue that he did not campaign on. The swing voters—people who previously voted Liberal—are likely wondering what the hell he’s doing. I will be surprised if the next polls do not show a shift away from him.

Finally, Ford is confusing his allies. The Ontario Tories have waited in the wilderness for a long time, and they could not be happier to be back in the backrooms, cutting red tape, shrinking government, rewriting the sex-ed curriculum and appointing their friends to boards and commissions. They can’t be pleased to see Ford risking it all with his braying, china-smashing ways.

My spies tell me that cabinet and senior staff were not all in favour of this plan, and the undisciplined communications strategy has to be shaking the confidence of the Tories.

During the campaign, Ford was disciplined, following the advice of former Stephen Harper staffers, past masters at keeping politicians in a message box.

Harper managed to win three mandates because of his discipline. He knew when to fight and when to truculently back down, even when that meant being schooled by the judiciary.

Ford has no such discipline, little prospect of learning it and is likely to be an unsuccessful one-term premier.