Tabatha Southey: Why the outrage over a photo of the Trudeaus wearing sweaters adorned with an emoji-added Last Supper scene is misplaced 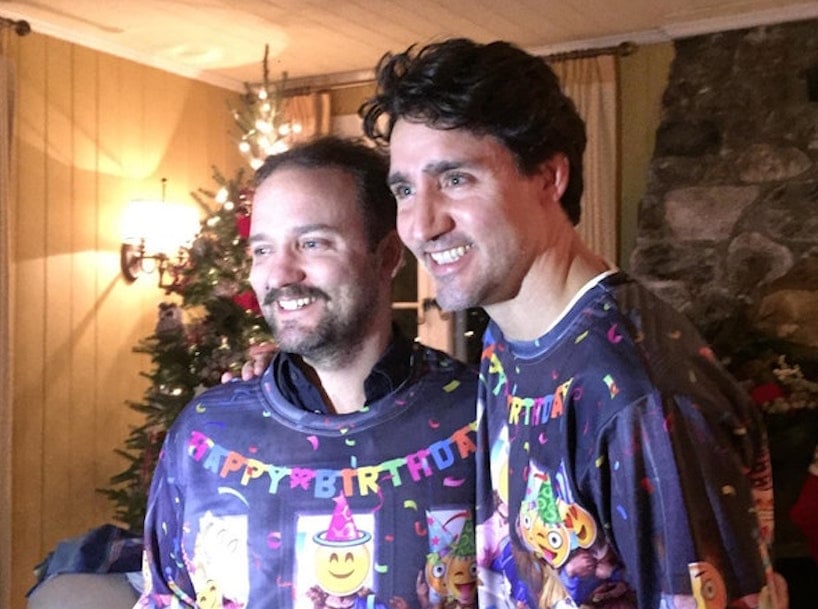 It was an odd way for Conservative Opposition House Leader Candice Bergen to close out the holiday season and ring in the New Year. But to each their own, I suppose: Some people like a final eggnog, some people like popping onto social media and accusing their Catholic political rival of cruelly insulting Christians everywhere by wearing a goofy sweater.

On the evening of Dec. 30, Bergen tweeted out a picture of Prime Minister Justin Trudeau and his brother Alexandre Trudeau that is at least 11 months old, since that’s when it was posted on Reddit. In the photo, the pair are wearing sweaters emblazoned with Leonardo da Vinci’s The Last Supper, except the faces of Jesus and the apostles around the table are covered by emoji, wearing party hats. There’s a cake and a banner with the words “happy birthday” on it. They’re standing in front of what appears to be a family Christmas tree, and they look to have pulled the sweaters on over their shirts. They’re smiling, having their picture taken.

“Why does @JustinTrudeau think it’s ok and cool to mock and ridicule Christianity like this?” Bergen asked in that tweet. “When will liberal left elite like Trudeau and those who defend his behaviour and laugh along with him realize how harmful and intolerant they are to Christians?”

I note that Canada’s Christians haven’t hit the catacombs yet, so the photo may not have the sinister powers with which Bergen imbues it. It may, in fact, just be a picture of two men wearing bad sweaters.

The two Trudeaus were, it is fairly well known, both born on Christmas Day. As a Catholic-raised Christmas Day baby myself, I know very well how excited people can get when they stumble across something Christmas birthday-themed to give you, and I’m familiar with the kinds of jokes and Jesus-themed cakes good Christians will make to celebrate a Christmas birth. There’s not a transubstantiation-themed one-liner about my own birthday cake that I haven’t heard.

The only evidence the sweater picture is real and not photoshopped is that it looks so terribly real. In a world where I predict that one day children’s names will be inspired by the nostalgia of Instagram filters—the 2040 nursery school class  will be comprised of Kelvin, Walden, Inkwell, Sutro, Sierra, Hefe, Brannan, Nashville, Toaster, Willow, Lo-Fi, Valencia, Rise, Amaro, Earlybird, Hudson, and a teacher sighing over her class list, “Oh, no, there are 5 Perpetuas,”—this photo feels like a flashback. It harkens back to the days where we would point the camera, shoot the photo, drop off a canister at a store, and just hope the results weren’t too washed out when you got them back in a week.

This is no “Justin Trudeau ‘caught’ jogging” photo. There’s no professional photographer with a great cardio routine in this scenario. There isn’t even a filter. If I had to play private-pic dick, I’d say it they’re having it taken by whoever it was who just gave them the shirts. Forget Instagram—everything about this pic says “insistent gran.”

All of which is to say that it’s not as if the PM was addressing the United Nations in that get-up. And while Bergen’s tweet prompted some on-cue hand-wringing on social media about the threat to Canada’s global standing allegedly posed by the birthday sweater, I’d say the level of diplomacy and confidence required to graciously accept such a gift, to smile in the face of absolute absurdity, might be exactly what’s required to renegotiate NAFTA at this point.

I fear other world leaders will take note of this. Then they’ll all be doing it, and an arms-in-ugly-sweaters race will benefit no one.

The now-controversial sweater itself is currently listed for sale at the website Shelfies.com for $59.99 (which might be the only offence here), should you too wish to be condemned for blasphemy by the MP for Manitoba’s Portage—Lisgar riding. The website’s sales pitch for this piece of knitwear is “Celebrate this cool dude’s birthday in style!” so I’d suggest that if these sweaters were part of an elitist liberal atheist scheme to undermine Christianity, it’s very well disguised.

The boring, hardly heretical fact of the matter is that everything about the picture that Bergen insists offends her so much suggests we are just looking at the twisted spawn of an ugly Christmas sweater and a gag birthday present. I can understand Bergen being horrified by such a sight—you show me a person who claims they can look at a Christmas sweater without feeling a bit queasy and I’ll show you a lizard in a human suit—but there are healthier ways to deal with this feeling.

The Gospel of Matthew instructs us that, “if thy right eye offend thee, pluck it out, and cast it from thee,” but steady on there—most ugly Christmas sweaters don’t require going quite that far. Consider placing a paper bag over your head instead. Tell your family it’s prescription. Other options include looking backwards through a pair of binoculars so that the sweater appears very far away. Try breathing deep, centring yourself, then using that air to fake a convulsive sneeze and spill wine all over the sweater. But whatever you do, don’t wait a year to tweet about said objectionable jumper in outrage, somehow trivializing the plight of Christian minorities facing often deadly persecution in the process.

The Last Supper, of course, isn’t an illustration from the Bible, a book that didn’t come with pictures. It’s not the revealed word of Dr. Seuss. The fresco was painted more than 500 years ago, for starters, and it’s a work of art—just one artist’s vision of Christ and his followers. It’s not, and really should not be, an idol. Certainly, it is the most famous of the many depictions of the last meal that Jesus shared with his Apostles, an almost astoundingly well-known work of art and, consequently—because it deals in such an intimate way with themes of profound love and betrayal—it’s also one of the most parodied. From The Simpsons to The Smurfs to The Sopranos to South Park to Star Wars—and that’s just a few of the ones that start with S—almost every set of characters created has been depicted sitting at that long table, anchored by some stand-in for our lonely Christ.

That the emoji had a reservation for dinner there shouldn’t come as a surprise. They are, after all, yet another version of ourselves. And of course we tease because we love, and also because we are afraid, and because to share a story is to share a language and often to find comfort in that commonality. It’s a testament to the resonance of The Last Supper—and more importantly, the story behind it—that the template Leonardo gave us has, for so many, become the seating arrangement of the human condition.

So, in the spirit of just trying to see the best in people, in not questioning their motives, let alone their faith, let’s just thank Candice Bergen for reminding us of that—and move on.