The real meaning of #TorontoStrong

Steve Maich: Why a year of tragedy won't change Canada's biggest city—it will remind us of what we are 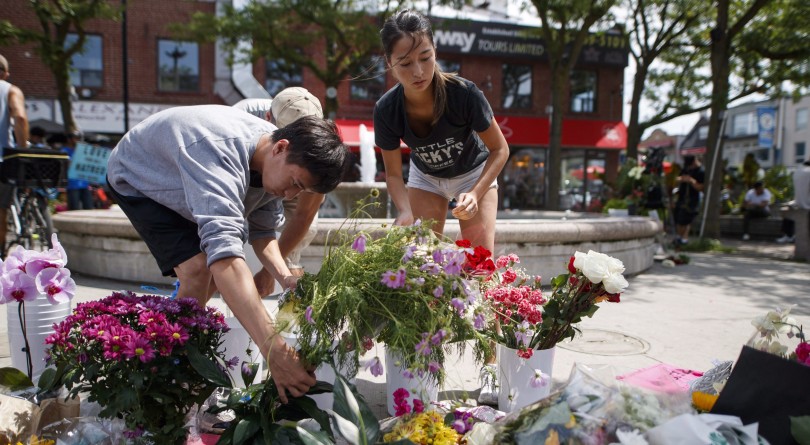 Kaya Malcolmson, right, and Jowa Malcolmson, left, organize flowers at a memorial site remembering the victims of a shooting on Sunday evening on Danforth Ave., in Toronto. (THE CANADIAN PRESS/Mark Blinch)

There have been moments in this awful year in Toronto when the stories of violence and terror have seemed almost surreal.

A couple of weeks before Christmas, the double-murder of Barry and Honey Sherman, found hanging from a railing adjacent to their indoor pool, conjured images of gangster movies. He was one of the city’s most prominent business leaders and together they formed a philanthropic power couple. More than six months on, we still don’t know who’s responsible for their grisly deaths.

Less than a month later, Toronto first learned the name of Bruce McArthur, a 66-year-old landscaper, arrested on suspicion of murdering two men who’d gone missing from the city’s gay village last year. As the winter progressed, more details seeped into public view and it became clear that a serial killer has been preying upon the community for years. McArthur now faces charges related to eight murders dating back to 2010, but the investigation continues, as does the excavation of a ravine where the remains of multiple victims have been uncovered.

Spring had barely arrived when, on April 23, a man climbed behind the wheel of a rented van and proceeded to mount the sidewalk and plow into pedestrians as he drove along Yonge Street for more than two kilometres. Ten people were killed and another 16 injured. In the days that followed, we learned that 25-year-old Alek Minassian, who has been charged with 10 counts of murder and 16 of attempted murder, associated online with a misogynistic sub-culture of “involuntary celibates” who vent their sexual frustration with violent fantasies and threats.

And now this. Last Sunday night, Faisal Hussein, 29, walked through the city’s bustling Danforth neighbourhood firing a hand gun indiscriminately into crowds of people enjoying a warm summer night out. Eighteen-year-old Reese Fallon and 10-year-old Julianna Kozis are dead, along with the killer. Another 13 people suffered injuries ranging from minor to critical. Hussain died of a self-inflicted gunshot and had a long history of mental health troubles and psychotic episodes, according to his family.

READ MORE: The other side of Barry Sherman

All of this has deeply shaken a city that prides itself on its peaceful image. This year was already on pace to be one of the worst on record for gun violence in Toronto. As of this week, there had been 228 shootings reported in Toronto, and 29 shooting deaths since New Years Day. And, when people are shaken, we fall back on familiar rituals. In this case, the rites of public healing were well underway within 48 hours of the Danforth tragedy. All of the first responders had been profusely thanked. Thoughts and prayers for the victims had been sent by the millions. The community had come together around a makeshift memorial for a vigil focused on “love not hate.” The #TorontoStrong hashtag was ready to go at a moment’s notice, earnestly retweeted by the city’s leaders and celebrities.

It’s easy to sound cynical, but these rituals are important and sincere. We repeat them instinctively because they help to allay our greatest fear: uncontrollable change. Most of us don’t spend much time worrying that we will be shot at random by a mentally ill person or killed in a terroristic plot, nor should we. Instead, we fear that our society is changing for the worse (more chaotic, divided, intolerant, repressive) or that it already has changed and this violence is the result. When our world is knocked off-balance, we want it to be put back the way it was before. We want to be reassured with messages of resilience, unity and courage.

But there is one part of the ritual healing message that simply doesn’t ring true anymore. “We were so used to living in a city where these things didn’t happen,” Toronto mayor John Tory said Monday night. “And as we saw them going on in the world, [we] thought they couldn’t happen here.” It’s tempting to buy into the “loss of innocence” sentiment that is so often repeated in the wake of disaster. But innocence left town a long time ago, if it ever existed at all. The underlying causes of violence are no mystery to us. We can rhyme them off from memory: poor mental-health services; toxic political rhetoric; online extremism and hate; easy access to deadly weapons; systemic discrimination and criminal corruption to name just the most obvious. Toronto is immune from none of these things, so why would anyone believe that we are exempt from the violence that they spawn?

We may never get the definitive answers needed to understand Hussain’s motives. For now, the focus is on his gun, and how a person with a history of mental illness obtained it. Two days after the shooting spree, council voted overwhelmingly to ban the sale of guns and ammunition in the city. Critics point out this will do little or nothing to make people safer. Hussain’s gun was illegally obtained. Guns will still be available a short drive away and through the robust black market. You can’t buy a gun legally in Chicago either and that city, about the same size as Toronto, recently recorded its 285th murder of 2018. But all that is beside the point. The healing ritual calls for symbolic action. In the end, for almost everyone in the city, the sound and fury will affect daily life imperceptibly, if at all.

Again, that might sound cynical, but this is a feature of our system and our society, not a bug. Substantive change in Canada comes gradually, fuelled by an accumulation of experience and exhaustive deliberation rather than lurching and halting in response to trauma. That’s how we like it. It has worked very well for us over the years.

Toronto is a very large city which has a long history of being conspicuously non-violent and safe for its size. Just last year, The Economist Intelligence Unit analyzed a raft of data comparing 60 of the world’s major cities and ranked Toronto fifth in terms of personal security. Like most places in Canada, the trend for the past 30 years has been toward lower crime rates and higher standards of living. This year has been very violent by local standards, but Toronto remains a relatively safe, affluent and peaceful big city.

While it’s natural to search for deeper meanings, it may well be that the biggest factor behind our year of mayhem is the law of averages. It’s simply our turn to face the limits of public safety. That’s why tragedies like these, even when clustered in quick succession, don’t change us. They remind us of what we are.

This week, two more families suffered horrible, inconsolable losses. Dozens more have joined the ranks of people living with the physical and psychological scars left by this year of misery.

The rest of us are shocked and saddened. We are galvanized by the small stories of bravery, generosity and compassion that emerge in the aftermath of terror. We try to learn what little we can. And we move on. We do all this because, as we remind each other in subtle ways every day, we don’t want this to change us. Toronto is not innocent. But, like Paris and Orlando and Barcelona and Boston and far too many others, we are reminded that Toronto is strong.