Letters to the editor, Jan. 8, 2019: Maclean’s readers weigh in on our choice of cover models, the future of #MeToo and an MIA Wayne Gretzky 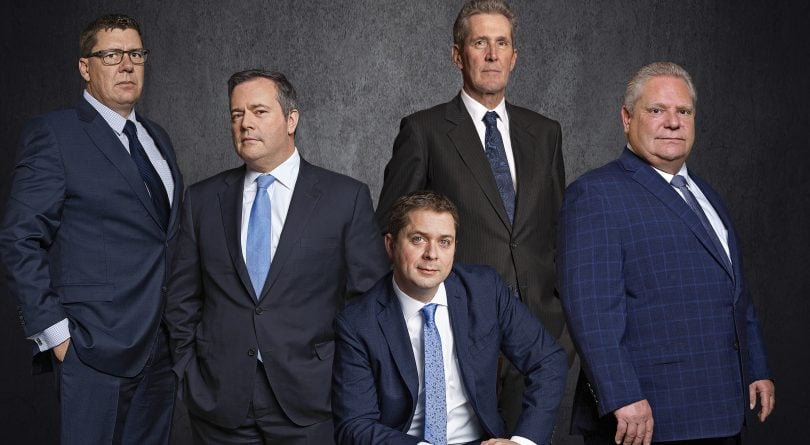 In November, senior writer Paul Wells wrote about the united front of Canadian conservative politicians who oppose a carbon tax. That feature was also our December cover story—and the text on the front of that issue elicited some colourful reactions online. Our readers, of course, wrote in.

The image of five guys ganging up to win an election over carbon pricing is disturbing. The strategy to appeal to suburbs and exurbs with 30 pieces of silver is so short-sighted in its promise to let you continue to mount your Escalade steed, as one fair-haired premier does. Imagine thinking those little people in the suburbs would actually fall for Doug Ford’s line that a carbon tax would attack commuters, not polluters. So poetic. A suburb-dweller and ex-urbanite, I choose to drive a modest Prius C because of fuel efficiency and ecological impact. There are people who need four-wheel-drive and larger vehicles for work and getting around certain terrain. They also need fair wages to pay for these necessities. Uh, didn’t something happen around that issue in Ford Nation? It feels as if political discussions have become a game of Whac-A-Mole. Hit the minimum-wage mole; it disappears and up pops climate change. It is ever more crucial to have holistic and robust discussions to keep the future safe and productive for Canadians. As Ford travels the country, he has never had time to respond to this little person’s concerns in far-off Ontario. He’s too busy gassing up the jets at our economic and ecological expense. Let’s not make our kids’ future home a house of cards.
—Carmel Richards, Georgetown, Ont.

Your December cover says it all: The ﬁve horsemen (er, politicians) of the apocalypse!
—Milan Stolarik, Ottawa

I just received the issue with the five white men on the cover, entitled “The resistance.” Yup. That’s exactly how I felt: resistant. In a pluralist society, one brimming with a deepening and engaging discourse on diversity and inclusion, things don’t get much more out of touch and irrelevant than this. They might miss the irony in a picture of old fossils taking a stand against a carbon tax.
—David MacKinnon, Wolfville, N.S

What gloomy pictures and stories of five white guys in ties planning strategies to win elections (they might be right!) with no apparent concern for the health of future generations or the planet itself. Given the recent warnings (even from the Trump-appointed panel), we need political leaders of every party to take strong measures to slow global warming. Could you please do another story on their specific plans to make a difference?
—Dianne Cooper, Winnipeg

With cannabis now legal, anyone promoting a carbon tax on Canada’s minuscule production must be smoking the funny stuff: a global effort is needed. However, Canada could pass its legislation as proposed, but only implement it when two of the three major emission producers (China, the U.S. and India) take similar actions—a moral but unhurtful stand.
—Paul Gagnon, Calgary

“The resistance?” Seriously? By tying the term to these five, you denigrate the memory of the thousands of people who fought and died in their efforts to free their countries from Nazi and fascist tyranny during the Second World War. Let’s preserve it as a term for those honourable men and women.
—Don Barr, High River, Alta.

I would like to share with you my deep frustration over the “resistance” cover. To depict conservative politicians who oppose action on climate change as some romantic group of freedom fighters is quite frankly disgusting. These individuals are actively fighting to diminish the health of our planet. Though they do not openly question climate change, many of their followers do, and you are strengthening their voice. Did you not read the recent UN report? Do you not care about the health of our planet? If you want to apply your magazine’s partisan leaning to taxes, deficits, infrastructure projects, health care and education funding, that is fine. These issues need rigorous debate, and no party has all the answers. But your magazine validated and encouraged the agenda of climate change deniers and individuals who care more about money than having a habitable planet. You should be ashamed of yourselves.
—Andrew Allan, Toronto

It struck me how the resistance to the carbon tax is five privileged white men. The faces of these oppositional conservative leaders remind us that this party is not interested in diversity, youth, immigration, women’s issues or the environment. Anne Kingston’s article notes how women have been at the forefront of change movements, one of which is concern about the environment. These entitled five seem to care more about supporting polluting industries and thus lining their own pockets than about future generations and the health of our planet. Look up the faces of the Conservative party and you will see plus ça change, plus c’est la même chose in terms of representation and willingness to address important issues of the day.
—Valerie Pruegger, Calgary

The one thing which angers me more than low standards is double standards (“The unquiet revolution,” Social Movements, December 2018). Therein lies a major challenge to the #MeToo movement. Observers of the Kavanaugh hearings wondered whether Christine Blasey Ford would be treated better than Anita Hill. Signiﬁcantly, no one recalled that Bill Clinton’s victims, vigorously maligned by Democrats and the women’s movement despite credible and more serious allegations than those against Clarence Thomas, have to this day received no apology. Paula Jones suffered a “Harvey Weinstein moment” when Clinton exposed himself to her; Kathleen Willey alleged she was assaulted in the Oval Office; and Juanita Broaddrick alleged Clinton raped her. Broaddrick’s 1999 claim of having been raped 20 years earlier, when Clinton already occupied high office in Arkansas, was dismissed as irrelevant to his suitability for the presidency. Yet Ford’s allegation of having been assaulted fully 36 years ago, when Kavanaugh was still a juvenile, was deemed by many to render him inadmissible in the less powerful office of Supreme Court justice. More recently, Hillary Clinton has denied that her husband’s relations with Monica Lewinsky were an abuse of power. Seriously? If even a nominally consensual liaison between the most powerful man in America and an unsalaried 24-year-old intern is not an outrageous abuse, then the concept has no meaning. Closer to home, Kingston cites Justin Trudeau’s fine words about believing women but reminds us that when accused of wrongdoing himself, he rationalized, after much prevarication, that it was a matter of mere perception and decreed that his own perception should prevail over that of his accuser. So: peremptory self-absolution for Trudeau, zero tolerance for everyone else. These cases muddy the waters concerning what is acceptable conduct and nourish the suspicion that #MeToo is hiding political agendas and personal vendettas behind a mask of social justice. They will hang like an albatross around the movement’s neck until it has the integrity to revisit and denounce these instances of manifest double standards. #MeToo is important, but it must remember: true justice plays no favourites.
—Charles A. Bogue, Stoneham-et-Tewkesbury, Que.

As the ambassador of Brazil to Canada, I believe the readers of Maclean’s deserve some clarification on Terry Glavin’s article. The author’s choice of adjectives and name-calling are not the main reason for concern. Freedom of opinion should always be valued. Misinformation, though, demands correction. When he deems President Bolsonaro’s election a “lurch toward a caudillo-style regime” or part of “a democratic unravelling across Latin America,” Glavin proves to be completely unaware of the strength of democratic institutions in Brazil. Brazil is one of the four largest democracies in the world, and the rule of law is stronger, if anything, after October’s election. President Bolsonaro has repeatedly vowed to respect the constitution and to work with the other branches of government during his term. A wide range of political parties have seats in congress; the press and the public make full use of their right to free speech; transparency and accountability are strictly observed. Those are the principles we Brazilians live by.
—Denis Fontes de Souza Pinto, Ottawa

In November, Patricia Treble wrote about Wayne Gretzky’s inability to pick up a prestigious civilian honour from Rideau Hall. It’s not even the first time she’s reported on the story.

If Wayne Gretzky, Phil Esposito and Bobby Clarke think so little of our country and the honours it has bestowed upon them, can those honours not be recalled or taken back in some way? Take back those awards and issue them to someone who still believes in Canada. To have to “find the time” to be honoured by your country is disgraceful. If this is their attitude, maybe the U.S. is the best place for them.
—Brett Younger, Winnipeg

I had mixed feelings after reading this article, but mainly a sense of embarrassment over the seeming national neediness implied. Gretzky, arguably the greatest hockey player ever, has received more than enough adulation, awards and financial compensation for his contribution to Canada and the sports world. It took him 14 years to make himself available to receive his officer of the Order of Canada, and then only while he was in Ottawa playing a game, yet those charged with the task of selecting persons to be honoured were not dissuaded from selecting him again for the even higher order! Surely, among 37 million other Canadians, there are thousands who have significantly contributed to Canada and would be truly honoured to be recognized by Rideau Hall. Perhaps Christopher McCreery, the author of 15 related books on honours, would be prepared to assist with the selection of deserving Canadians. Or perhaps we should reduce the annual number of inductees to the Order and maybe, just maybe, strengthen the value of our honour currency.
—Jim McEwan, Ottawa