Peter Shawn Taylor: The Liberals reversed a plan to push the eligibility age for retirement benefits to 67. It goes against global trends and economic reality. 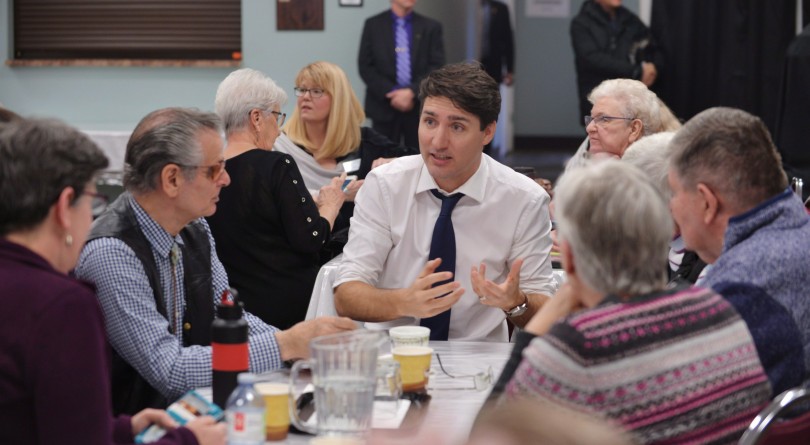 Prime Minister Justin Trudeau visits with people at the Centre for Seniors Information in Kamloops, B.C. on Thursday, Jan. 10, 2019. (THE CANADIAN PRESS/Murray Mitchell)

At the January 2012 World Economic Forum in Davos, Switzerland, Harper noted the demographics of an aging and longer-living population constituted “a threat to the social programs and services that Canadians cherish.” His solution: gradually lengthen the age of eligibility for Old Age Security and Guaranteed Income Supplement (OAS/GIS) from 65 to 67. These changes would take effect between 2023 and 2029, giving Canadians a leisurely 17 years to prepare.

It never happened. Prime Minister Justin Trudeau made undoing this move one of his first priorities following the 2015 election—pushing Canada’s retirement age back to 65 before Harper’s changes even started. With Canadians now groaning over higher Canada Pension Plan (CPP) payments—and amid growing concern about the future of our labour force—Canada’s unchangeable retirement age is becoming an economic millstone. And it may be too late to fix it.

When the Canada Pension Plan came into effect in 1965, life expectancy was just shy of 72 years. Canadians could thus expect six or seven years of public pension benefits before moving on to their greater reward. Since that time, however, tremendous improvements in health care and geriatric medicine have pushed life expectancy to 82 while the traditional retirement remains stuck at 65, creating an extra decade of leisure.

According to the Organisation for Economic Cooperation and Development (OECD), Canada’s decision to revert to age 65 bucks a global trend. “Many countries are increasing their retirement age,” the OECD observes in a recent pension report. Australia, Britain, Finland, Iceland, Ireland, Israel, Norway, Portugal and the United States are all either gradually hiking their retirement age to 67, or have already completed the change. Three countries: Denmark, Italy and the Netherlands are in the process of making 68 their normal age of retirement.

“We are an outlier,” observes Jason Clemens, executive vice-president of the fiscally-conservative Fraser Institute think tank. The ever-widening gap between normal retirement age and life expectancy means Canada’s retirement programs, including CPP plus OAS/GIS, become more and more generous with every passing year. At the same time, an aging population means there are proportionately fewer and fewer workers to provide the necessary taxes to fund those growing benefits and health care expenses. There are now 106 seniors aged 65 and older in Canada for every 100 children aged 0 to 14. If retirement age was indexed to life expectancy (as is now the case in Finland), Clemens calculates, Canadians would be retiring at 74 today—working, and paying taxes, for nine additional years. “From this perspective, going to 67 seems a fairly mild option,” he says.

There’s plenty of evidence to suggest most workers are willing and able to work well past 65, regardless of what government policy says. Statistics Canada reports more than 40 per cent of Canadians aged 65 to 69 are currently employed—with a sizeable majority saying it’s out of preference rather than necessity.

Plus, there’s a growing trend to defer CPP as long as possible. Since 2012, Canadians have been able to choose to delay receipt of CPP payments until age 70 in exchange for more generous benefits. “A majority of my clients will be taking CPP at 70,” notes Vancouver-based financial planner Adrian Mastracci of Lycos Asset Management. “It’s a very good choice, provided you don’t need the money right away.” The 71-year old Mastracci, by the way, is himself proof that careers need not end at 65. “I like what I do and I’m still in good health,” he says of his decision to keep working. “So why not?”

And yet an arbitrary retirement age of 65 acts as a disincentive for many other Canadians who could be working longer. According to the 2017 report from the federal government’s Advisory Council on Economic Growth, Canadians aged 55 to 69 constitute a significant ‘untapped potential’ for the labour force, and increasing the retirement age would have a noticeable and beneficial impact on economic growth. “Pension plans should not discourage working,” it concluded. The Trudeau government rejected this advice out of hand.

While Liberal pandering to the senior vote is largely to blame for Canada’s stationary retirement age, Harper also bears some responsibility. When he announced changes to OAS/GIS at Davos in 2012, Harper deliberately avoided making a similar and necessary change to CPP. This was because reforming the CPP requires negotiations with the provinces, something he assiduously avoided during his term in office. Rather than deal with the premiers, Harper chose to focus only on OAS/GIS, which is under exclusive federal control. Had he struck a deal to lengthen CPP’s retirement age in 2012, it would have been much harder for Trudeau to undo it three years later.

When the federal Liberals did engage with the provinces on CPP in 2016, it was to expand coverage to address concerns of under-saving by some segments of the middle class. As a result, CPP premiums rose significantly in January and will keep rising for the next seven years. By the time these hikes conclude in 2026, someone earning $55,000 per year will be paying an extra $500 a year. (Double for self-employed individuals.) As Clemens points out, however, the Liberals’ coverage enhancements could have been achieved without dramatic increases to rates if the retirement age had simply been pushed to 67 at the same time. “It was a missed opportunity,” he says. Such a grand bargain combining broader coverage with longer working careers would have set Canada’s retirement system up for decades to come.

With each passing year, however, it becomes harder and harder to make the necessary changes. As the dominant Baby Boom is now deep into retirement, it’s no longer possible to adopt a long lead-time included in Harper’s original plan and still have a significant impact on Canada’s boomer seniors. “To get any real savings now, you’d have to condense the implementation period in such a way that wouldn’t be fair to many Canadians,” says Clemens. “That makes it a tougher and tougher sell as time goes on.”

In other words, Canadians may now be stuck with a retirement age that gets more out-dated with each passing year. Age is just a number, of course. But 65 stopped being the right number for retirement a long time ago.