The rise of America's NDP

Rick Smith: There has never been a better moment for American progressives to flex their muscles 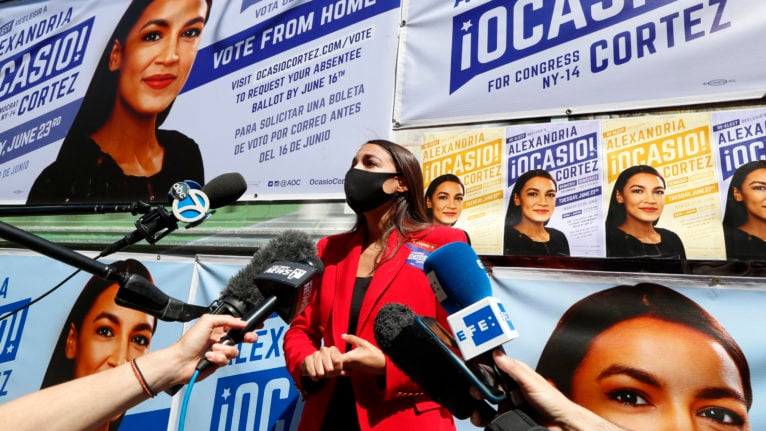 U.S. Rep. Alexandria Ocasio-Cortez, speaks to members of the media while standing beside a truck plastered with campaign posters after greeting voters in Astoria, Queens on Jun. 23, 2020, on primary election day in New York. (CP/AP/Kathy Willens)

Rick Smith is the executive director of the Broadbent Institute.

In this Trump-saturated time, one of the most underreported U.S. stories is that of the growing influence of the progressive wing of the Democratic Party, an accelerating trend that is fundamentally re-shaping politics south of the border.

Though Bernie Sanders and Alexandria Ocasio-Cortez get a lot of attention, their relatively recent success is part of a much broader ideological and generational political shift. Everywhere you look these days, Democrats who identify as “progressive” (what the rest of the world would call a social democrat) are successfully competing against more conservative Democrats — many of whom are long-term corporate-financed incumbents – for their party’s nomination. In the past week, for example, novice Jamaal Bowman unseated 31-year New York Democratic Congressman Eliot Engel and in Kentucky, progressive Charles Booker came out of nowhere to nearly beat heavily favoured centrist Amy McGrath.

In perhaps the most telling sign of the growing influence of the Democratic Party’s progressive wing, Joe Biden has populated his key policy committees with progressive thinkers, a marked departure from the “freeze them out” approach taken by the Clinton campaign in 2016.

MORE: America is woefully unprepared for mail-in voting. The result will be messy and divisive.

These recent victories have been decades in the making. When Bernie Sanders and a handful of colleagues founded the party’s Progressive Caucus in 1991, it was a marginal faction both within the Democratic tent and the landscape of American politics writ large. By the time it had its C-SPAN debut a few years later, it counted a mere dozen members in its ranks. Today, that number has swelled to an astonishing 95, making up more than 40 per cent of the Democratic caucus and nearly a quarter of the entire House of Representatives. Whereas the leftward edge of the party was represented by relatively moderate figures like Howard Dean less than two decades ago, today it counts unapologetic progressives like Pramila Jayapal, Ilhan Omar, and Ro Khanna.

This represents an astonishing turnaround in a country where the progressive movement has historically struggled to secure a lasting foothold in a traditionally two-party system dominated by liberals and conservatives.

Progressively-minded Canadians knew the feeling all too well in the early decades of the 20th century, and their frustration eventually gave birth to the Co-operative Commonwealth Federation and its successor the New Democratic Party (NDP). Though social democrats have yet to form government at the federal level, the legacy of their longstanding presence in Parliament is immediately felt by every Canadian who needs to see a doctor, every worker who gets laid off, and every pensioner who wants to retire in security. If Canada’s health care system and social safety net are more universal and robust than their U.S. equivalents, the electoral success of Canadian progressives — and the good ideas they inject into our political debates — can rightly take the lion’s share of the credit.

America’s electoral system, of course, has long precluded similar efforts at building a third party. But in recent years its progressive left has discovered that this may not be the fatal impediment many believed. Indeed, through a combination of creative organizing and insurgent primary challenges, the American progressive movement is now flexing its muscles like never before.

One important template has been the Working Families Party (WFP), which has demonstrated that progressives can operate both within and outside the traditional structures of the Democratic Party to rack up big electoral wins and policy victories — even in a hostile climate. Groups like Justice Democrats and Our Revolution have shown the same.

Another sure sign of progressive strength is the recent creation of the Congressional Progressive Caucus Center, an invaluable facilitator and policy shop that is working hard in spite of Sanders’s defeat to seize the current moment and make sure progressive ideas are heard in the critical months ahead.

There is a little-known Canadian connection to these recent U.S. progressive successes. Dan Cantor, one of the founders of the WFP, told me that in the early 1990s, when U.S. progressives were trying to get a WFP precursor called “The New Party” off the ground, he and a team of organizers spent a week in Ottawa learning from the NDP. “That early training from the NDP as to how to create and grow a social democratic political party was really helpful to us at a critical moment,” Cantor said.

Cantor and the WFP have recently returned the favour by hosting an event with U.S., legislators for NDP Leader Jagmeet Singh the last time he was in New York City. Reflecting on the three-decades-long journey of U.S. progressives since that Ottawa visit, Cantor is bullish at the prospect of further gains. “Our goal isn’t to kick the corporate wing out of the Democratic Party,” he said, “but rather to make them junior partners like we were for so long. After many years of building, we’re finally pulling the Democratic Party to the left. If you think we’re making huge gains now, just wait to see the next round of primaries in 2022.”

With the ongoing crisis of COVID-19, a possible recession, and the most decisive electoral moment in recent history looming on the horizon, there has never been a better moment for American progressives to flex their muscles.

Our American friends are finally building an NDP of their own. And their country will be far better for it.