The rules of B.C.'s electoral-reform vote show just how healthy our democracy is

Opinion: The questions and rules governing British Columbia's referendum on its voting system don't represent the democratic doomsday that some claim 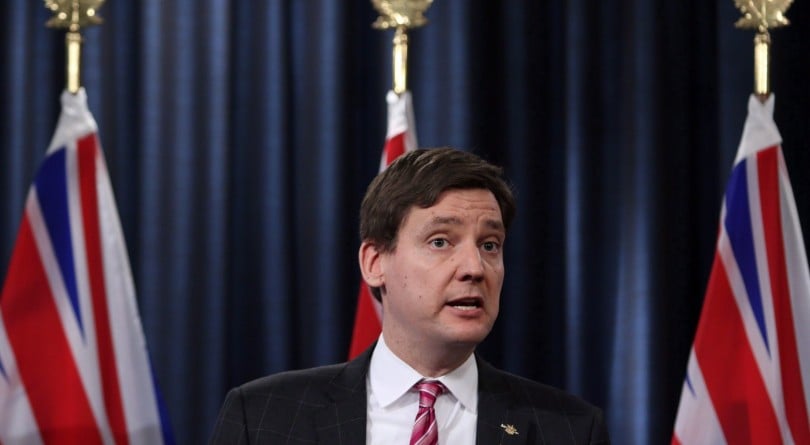 Attorney General David Eby answers questions from media about the changes coming to ICBC during a press conference in the press gallery at Legislature in Victoria, B.C., on Tuesday February 6, 2018. THE CANADIAN PRESS/Chad Hipolito

The government of British Columbia has released the details of its upcoming referendum on electoral reform, and I regret to inform you that according to opponents of the plan, democracy in the province is dead. Right out of the gate, before the ink had dried on the paper, local columnists, the B.C. Liberals, and the presumptive official “No” side (the “No B.C. Proportional Representation Society”) were howling. Geez—the weather was just getting good, and now here come some clouds, portending our destruction.

Here’s what’s apparently “killing” B.C.’s democracy: On May 31, Attorney General David Eby announced that British Columbians will vote by mail-in ballot between Oct. 22 and Nov. 30 on whether to adopt a new way to elect members of the legislature. Voters will be asked two questions. First, they’ll decide whether they prefer the current system—first past the post—or an alternative based on proportional representation (PR), a family of systems in which parties receive seats in the legislature closely corresponding to the proportion of votes they receive. And second, they’ll have to decide which of three PR systems on offer they prefer: mixed-member, dual-member, or rural-urban. The second question will also ask folks to rank their preference.

For proportional representation to win, more than 50 per cent of voters must choose PR over first-past-the-post in the first question. If that happens, the winning system will be the one with the most support from the second question based on ranked preference, a way of counting that ensures a single choice gets majority support by dropping the least preferred option at the end of each round of counting and distributing voters’ second choice preferences until a winner emerges.

You’ll be forgiven for having questions already. That’s normal. When I first learned about electoral reform, I read the pamphlet I was given a few times. Later, I watched a series of animal kingdom videos that helped explain the systems to me, which were as charming as they were helpful. (No surprise, it turns out that electoral reform is gorilla warfare.)

The B.C. government knows that education will be essential, so they’ve put up $1 million to be split between an official “Yes” and “No” campaign, so that each side can make their case to voters. For their part, Elections B.C. will provide neutral educational information for the public.

Each of these recommended rules is subject to cabinet approval, but they will almost certainly be accepted as-is—or at least nearly so.

Does any of this seem like a scene from Mad Max? No? How about V for Vendetta? Hell of film. Still no? Well of course not. In fact, the referendum process strikes me as a fair, orderly, and really rather democratic exercise in self-determination. To be honest, I was a bit surprised at just how good the plan turned out, especially given my previous concerns.

So maybe—just maybe—democracy in Canada’s westernmost province is fine shape. Despite the doomsday soothsaying, could it even be that the electoral reform referendum is an expression of how healthy our democracy is?

Eby’s plan wisely allows voters a chance to first choose between the status quo and change: there’s no stacking of the deck in favour of PR systems. In fact, if anything, by putting first-past-the-post alongside PR in the first question, the plan might slightly favour the status quo, since the current system is one of two choices instead of one of four, which it would have been had the attorney general decided to lump them all together in a single question. Also, even though the New Democrats themselves—and the Greens who support their government—campaigned for and favour PR, the government itself won’t take a position on any system. It will be the party and the caucus, not the government, that will favour a change. That distinction is important.

So, the question itself is fair. On top of that, the plan ensures that if voters elect to adopt PR, several years from now they will have a chance to decide whether to switch back to first past the post or keep the new system in a confirmation referendum. That seems fair, too. Everyone loves a generous return policy.

Finally, Eby’s plan bans corporate and union donations and caps advertising at $200,000 per registered sponsor, and everyone who advertises will be required to register. So big money is far less likely to win the day than good old-fashioned door-knocking, persuasion, and mobilization. Again, that’s good news for people who like democracy.

Given time constraints, the government hasn’t released a plan for drawing new boundaries or designing certain technical specifics of the chosen system. That work will be left to an all-party committee of the legislature and an independent boundaries commission, an approach that’s plenty consistent with democratic norms of inclusion and independence when it comes to major rule changes. Just like during the vote, there won’t be a chance for the government to game the system after the vote.

The most notable weak spot in the plan is a lack of any regional or turnout thresholds for adopting a new system. I prefer regional thresholds to help balance interests across the province, but that shouldn’t be a deal-breaker given that Eby has guaranteed that no riding will lose its member of the legislative assembly.

Also, elections for members of the legislature don’t have thresholds, either, and we seem to do fine enough with those. It’s long been the case that for most of what we do in a democracy, outcomes are decided by those who show up. This puts the onus on campaigners for and against reform to get voters to fill out and send in their ballots. For their part, citizens should take the referendum seriously and for what it is: an important and uncommon opportunity to decide how their democracy will function. To that end, it will be important to not only work to ensure high turnout, but also to be united in vigilance against any attempts to suppress the vote by anyone.

During a high-stakes campaign like this one, it’s tempting to reach for cynical, partisan, or self-interested criticisms of the democratic process to try to bolster your chances of winning; it’s tempting to cry foul, to scream about a “rigged” game, to distort reality to fit a preconceived strategic narrative. But you shouldn’t give in to those impulses. To do so is cheap, lazy, short-sighted, and contrary to the spirit of democracy.

The government of British Columbia is putting two fair questions to each and every one of its citizens who will have an equal chance at determining the future of the province’s electoral system. Ideally, there would be more time for people to consider their options, but with a robust public education campaign, folks can learn a lot in six months—certainly enough to make an informed decision.

This vote is happening. It’s happening soon. And the process by which it will happen is perfectly consistent with the democratic norms and values that allow us to hold these referendums in the first place. The best thing for proponents and opponents of the plan to do is accept that and prepare their cases for and against the options on offer so that British Columbians can make an informed choice this fall.