The science of novel coronavirus

Timothy Sly: The basic reproductive number of coronavirus is 2.6. Here's what that means. 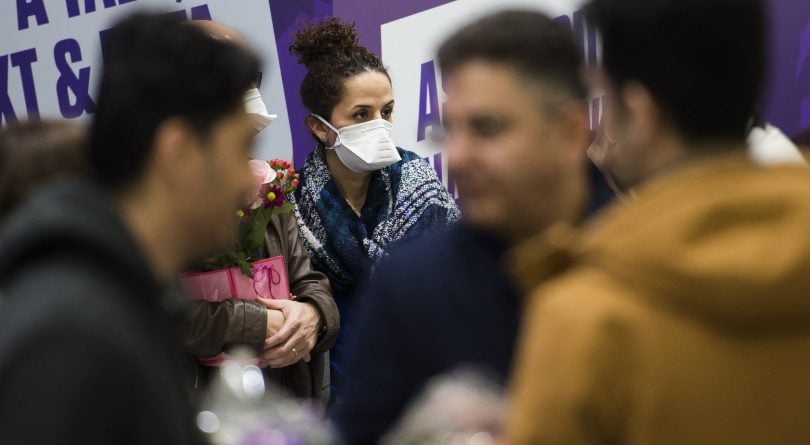 People wear masks as a precaution due to the coronavirus outbreak as they wait for the arrivals at the International terminal at Toronto Pearson International Airport on Jan. 25, 2020. (Nathan Denette/CP)

The recent arrival in Canada, by air, of three presumptive cases of the novel coronavirus (designated “nCoV-2019” by the World Health Organization), renews concern about what we know—and especially what we don’t yet know—about this viral agent and how much of a threat it is.

“Presumptive” means that while all indications point to a positive identification, we’re still awaiting laboratory confirmation. But while we wait, recollection of the painful visit in 2003 of another coronavirus—SARS—prompts the question: Are we better prepared now to prevent mayhem, malady and mortality? And just how serious is this infection?

Seriousness, in the context of an infectious illness, is assessed by a combination of factors. The “case-fatality rate” (CFR), is the risk of dying if you have the condition. For example, dandruff has a CFR of zero, Ebola ranges from 25 per cent to 90 per cent, and rabies is essentially 100 per cent fatal. Seasonal influenza comes in around 0.1 to 0.2 per cent, or one-to-two deaths expected per thousand cases.

Among coronaviruses, SARS had a CFR around 10 per cent and MERS about 34 per cent. The rough figures supplied by the Chinese public health system to date suggest a CFR for the nCoV-2019 of a little more than two per cent. This figure may change once we have a better idea of the volume of all—both mild and severe—cases.

A second key factor is the rate at which an infection can spread to others. That’s the “basic reproductive number” or R0, an estimate of how many secondary infections can be expected from an average primary case. An R0 greater than one predicts continuing growth, less than one predicts the outbreak will die out, while an R0 equal to one, suggests continuous low-level disease—an endemic. The R0 for SARS for instance was between two to five, diphtheria, four to five, and measles nine to 18.

Natsuko Imai, global infectious disease analyst at the department of infectious disease epidemiology at Imperial College London, estimates the R0 for the new coronavirus to be 2.6. But this is only when a case has opportunity to transmit the infection. Someone in isolation would have very little opportunity to infect others, while increasing hand-washing, avoiding crowds, and keeping your distance all reduce personal risk of transmission.

With thousands of people arriving daily by air from every corner of the globe, Canada should expect more cases in the next few weeks, and realistically, some person-to-person transmission is likely. But when that transmission occurs out of sight, or before people are symptomatic, we have what epidemiologists dread: what they call “loose ends,” with no clear traceback to a known source. That’s when the possibility exists for uncontrolled spread.

Let’s look again at air travel. How likely is it that an infection may be transmitted to others at 39,000 feet among 300 people packed inside an aluminum tube for up to 15 hours? After all, we can travel to any major centre on the planet in fewer than 18 hrs, which is less than the incubation period of many infectious diseases.

In 1996, researchers at the Centers for Disease Control and Prevention in Atlanta, demonstrated that transmission of highly-infectious tuberculosis (a bacterial disease) from an index case (the first documented patient in an epidemiological investigation within a certain area) to passengers within two seats in all directions on flights eight hours or less can take place. But during SARS, a study by the Robert Koch Institute in Berlin, tracked a SARS-positive businessman through seven international flights around Europe over five days. Passengers seated within four seats in all directions were traced, but no secondary infections were found.

Not all flights were as uneventful, however. The World Health Organization (WHO) found that seven new cases of SARS occurred during 35 flights where an infected person was on board.

But one flight was very different…

On Mar. 15, 2003, Air China Flight 112, departed Hong Kong for Beijing, carrying 120 people. One of those was 72-year-old man researchers called “LSK,” who had been visiting his sick brother in Hong Kong. LSK was already feeling unwell when he boarded the flight and sat in seat 14E, unaware that he was to became the direct source of infection for 20 passengers and two crew members during the three-hour flight. Passengers up to seven rows ahead and five rows behind him became infected. Within a week, the two flight attendants carried the virus to Northern China, where more than 300 people subsequently became ill, and many died, including at least one physician.

WHO officials had previously reiterated that air travellers “within two rows of an infected person could be in danger.” However, the virus had also been found to survive for days in the environment, giving rise to the possibility of spread by contact with surfaces including armrests, toilets and tray tables.

The incident was the largest recorded in-flight transmission of SARS; LSK was be considered a “super-spreader,” an infective case who was able to spread the agent to at least eight other people. The incident was clearly atypical, but it does suggest we should revise assumptions about infective “danger zones” in passenger aircraft.

There is no doubt that the new viral agent is moving fast, at least within China. At the time of writing, the nCoV-2019 appears less severe to the individual than SARS, but it is reported to have reached 10,000 and 213 deaths in one month. By comparison, as of Apr. 10, 2003, roughly two months into the SARS epidemic, it had recorded only 2,781 cases and 111 deaths. In China, virtually every region has now been affected, including Tibet.

Clearly, the initial cases of illness resembling influenza had started to spread locally in Wuhan before authorities could respond adequately. Thus far, with the advantage of distance, forewarning, and a high level of official preparedness, other countries including Canada have only a handful of cases, and the responses are going as planned. But complacency is always an invitation to the wiles of Mother Nature, who will usually find a way in.

The best advice if it is announced that coronavirus cases are found in your area?