The secret shame of the Canadian senator

Scott Gilmore: Senators are unaccountable nobodies, and it is impossible to imagine they don't see they're part of an undemocratic charade 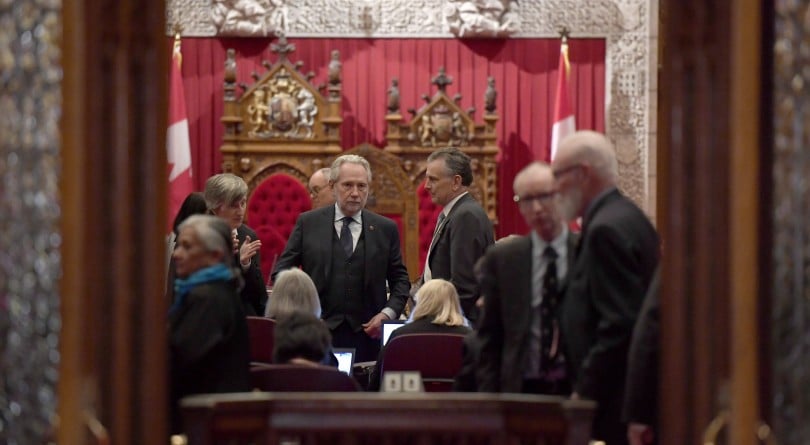 Sen. Peter Harder, government representative in the Senate, left, speaks with Sen. Larry Smith, leader of the opposition in the Senate, before a vote on Bill C-45, the Cannabis Act, in the Senate chamber on Parliament Hill in Ottawa on Thursday, March 22, 2018. (THE CANADIAN PRESS/Justin Tang)

I cast my first vote four weeks after my 18th birthday. It was an historic election—the first time Canadians elected a senator, Stan Waters. And although then-prime minister Brian Mulroney hesitated to appoint Waters, he eventually capitulated after being warned he would lose all his Alberta seats if he didn’t. It was a rare moment of progress in a debate over Senate reform that has been going on since Confederation.

In the years that followed, Preston Manning struggled quixotically to champion an elected upper house, but failed. It seemed hopeless, until former prime minister Stephen Harper, to his great credit, stopped appointing senators all together, hoping provinces would either start holding elections or the institution itself would simply die on the vine.

His successor, Justin Trudeau, decided he had a more clever solution, one that kept with the intrinsically Liberal belief that government is always wiser than the people, and set up a committee to appoint “independent” senators. As was easily predicted, the result was a red chamber populated with people who are beholden to no party, making them even less accountable than ever.

And so, this week, we were treated to the spectacle of unelected legislators attempting to override the will of elected parliamentarians by trying yet again to slow or kill the bill legalizing marijuana. This is now a Senate that has gone from an unsightly, but otherwise benign mole, to a cancer that must be removed. It is too late for reform. It is time to kill the Senate. And no one knows this better than the senators themselves, who are reminded daily of their illegitimacy.

These senators enter Centre Block through the same doors as our members of Parliament, each of whom had the courage to put their name on a ballot—and each of whom were chosen by Canadians to represent them in Ottawa. As the senators make their way to their empty chamber, they see the noisy tourists lined up for the House of Commons gallery, before they enter the echoing stillness of the Senate chamber—yet another reminder that they are merely historic anachronisms, ridiculous in a 21st-century democracy.

These senators know they are unneeded. Their speeches go unheard, their debates unreported. Even as they busy themselves with meetings and hearings, they are aware that nothing they say or do should alter the course of this country. One can almost forgive their attempts to be relevant by shoehorning themselves into the marijuana debate. Until we remember that they are seeking to overrule the will of the legislators we elected, then the compassion vanishes.

You can be sure each of these senators at some moment has reflected on former prime minister Pierre Trudeau’s observation that the opposition MPs are “nobodies” once they cross a line 50 yards from Parliament Hill and silently asked themselves where their line is, if there is one at all.

And these senators (I can’t call them “our”, since none of us chose them) know they are unaccountable. No one from the press is asking them questions. The public doesn’t know how they voted and doesn’t care. Back in their home province, no one is lined up to lobby them. Can you even name one of the senators that supposedly represents your interests in Ottawa?

Yesterday the (twice elected) Green Party leader Elizabeth May took me to task for calling these senators “cronies.” She called the appointed senators “impressive, merit based.” I couldn’t help myself. I had to swear in response. There is nothing impressive about being unaccountable. There is no merit in being unelected. She knows that. We know that. And the men and women who were appointed to the senate know that.

When the call came from the Prime Minister’s office, some may have hesitated, but they all agreed to accept the appointment. Yet, after even a few days in Ottawa, it is impossible to imagine they did not see they were participating in a shameful charade, a 19th-century masquerade that became a ridiculous embarrassment to our democracy long ago. No senator that I am aware of has publicly acknowledged this. But I am sure that every one, in those liminal moments during yet another droning committee meeting, has felt a shudder of shame.

It is a political truism in Canada that we can do nothing about the Senate. We can’t open up the constitution and the provinces will never agree. In fact, we don’t know that because we have yet to really try. We must restart this conversation. If we don’t we must share the senators’ shame, because we are as much to blame for not telling them to go as they are for not going.

Until then, we should make it clear to these men and women who occupy the red chamber: If you won’t resign and insist on continuing this farce, then do so in silence. And until we can agree on how to get rid of you, understand your opinion on marijuana or anything else is unwanted.