The SRO program is over. What happens next?

Opinion: Trustees from the largest school board in Canada have voted to end police officers serving in schools—and next steps will be crucial 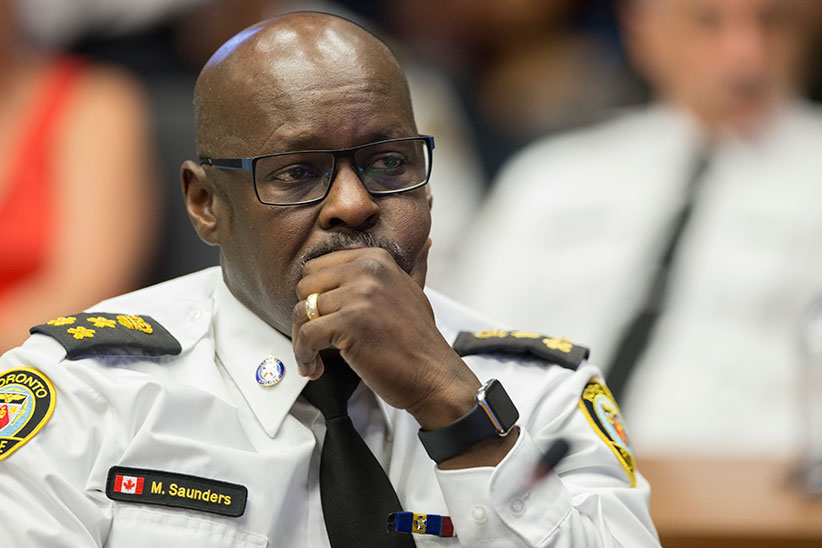 Toronto Police Chief Mark Saunders listens to deputations. Members of the public, and others, appear before the Police Service Board to discuss the funding of School Resource Officers (SRO) in local schools. (Rick Madonik/Toronto Star/Getty Images)

Phillip Dwight Morgan is a Toronto-based journalist, poet, researcher and the inaugural Rabble.ca Jack Layton Journalism for Change Fellow. He is also a member of the organization Education Not Incarceration, a team of youth, students, parents, caregivers, educators, researchers, journalists and community organizers in Toronto who have come together to address the school-to-prison pipeline.

In 2008, without community consultation, the Toronto District School Board and Toronto Police Service agreed to place police officers in select high schools around the city. The result was a program where some Black and Brown students said they felt targeted, harassed and intimidated, and where some undocumented students reportedly feared for their safety.

Since its inception, the School Resource Officer (SRO) program has faced allegations of racism and discrimination as community members and organizations have questioned how a program that placed police in the schools of largely racialized communities could possibly improve circumstances for youth already being pushed out by academic streaming, increased suspension rates and low teacher expectations. As time passed, the picture became clearer: SROs largely intimidated, harassed and criminalized Black, Brown and Indigenous youth, and allegedly threatened the safety of undocumented students.

That program is now over. At a Nov. 22 meeting, after a six-week review process, trustees from the largest school board in Canada voted overwhelmingly to terminate the program.

Make no mistake: the landmark decision is the result of years of pressure from students, parents, youth workers and concerned citizens. These people repeatedly reminded the board that it was utterly unacceptable to accept Black, Brown, Indigenous and undocumented youth as collateral damage in the push to improve Toronto’s schools. “It is time for school boards across the province and country to acknowledge the ways in which educational policies and practices continue to be shaped by ongoing histories of colonialism and racism,” says Gita Rao Madan, who studied policing in schools for her master’s thesis at the Ontario Institute for Studies in Education.

Still, how did a program with such a terrible track record continue for nearly a decade? The sad fact of the matter is that the people most affected by the program were those at the intersection of two deeply oppressive institutions—policing and education—that routinely worked to silence them. Those people, who faced harassment and profiling both inside the classroom and out on the street, had little access to the levers of change.

In response to community concern in the past, the TDSB and TPS had deflected criticism by pointing to so-called “success stories” from the program—accounts of students who loved the baking club being run by Officer Jane or the volleyball team coached by Const. Jim. These are the narratives and images that the TPS and TDSB offered to the public whenever the program faced scrutiny. Now that the program has been terminated, its supporters will likely evoke these images with even greater verve.

But a line of reasoning that asks communities to ignore the experiences of children being pushed out of schools and to instead celebrate the child who loves Officer Jim betrays a failed understanding of the history of community policing in Toronto on the part of those in positions of power. It shows a reluctance to concede that carding, police harassment, intimidation and violence do not stop at the school’s entrance. It is not rooted in equity. Earlier this May, Police Chief Mark Saunders responded to concerns expressed about the program at a Toronto Police Services Board meeting by noting that a 2011 evaluation of the program showed 58 per cent of students felt safer with SROs. In response, TPS Board member Dhun Noria injected an important reminder: “You mentioned, chief, that 58 per cent of the respondents felt safe [with SROs]. This leaves 42 per cent who do not feel safe. Do we have a report about that? Why do they not feel safe and what have we done about that?”

Terminating the SRO program is an important first step in healing the wounds caused by a program that maintained what was effectively a two-tiered educational system, where some students—by virtue of their privilege—entered schools feeling safe and supported, while others, many of whom were Black and Brown students, were made to feel intimidated and harassed.

It is reason for cautious optimism. In light of the results of the TDSB’s review, which indicated that 2,207 students felt that “having an SRO made them feel like they were being watched or targeted at school,” and that 884 students felt “uncomfortable or very uncomfortable interacting with the SRO at their school,” many of the trustees appear convinced that the program is manifestly unjust.

But more fundamental questions of whether it is ethical to use communities of colour as testing grounds for new initiatives involving police—or whether police belong in schools at all—have yet to be taken up in the public discourse. And they should be: the program review that led to the cancellation also recommended that “staff continue to work in partnership with the Toronto Police Service (TPS) to maintain positive working relationships that will ensure a safe, welcoming and inclusive culture in every school.” Clearly, there is still work to be done in terms of addressing the many complex ways in which racialized and undocumented youth are pushed out of the school system.

As a Black man in Toronto, I believe that police have no place in schools. In addition to the more than 2,000 students who reported feeling watched or targeted by an SRO, 1,055 students said the presence of SROs made them feel uncomfortable attending school. In their examination of the school-to-prison pipeline in Canada, Abigail Tsionne Salole and Zakaria Abdulle assert, “Youth participants in this research made it abundantly clear that education and knowledge are important to them, however their full participation in school is undermined by surveillance and policing practices.” They continue, “For these youth, school is not a respite for their unequal childhood.” At a time when education is so intimately tied to an entire ecosystem of social indicators, the stakes are too high to compromise the safety and integrity of the learning environment for racialized youth.

Nevertheless, the termination of the SRO is an important victory for the community and a major decision for the TDSB. “This will require all school boards to confront the evidence that has so clearly been put before them now and for many years prior, and to act in the best interests of all students,” Madan said via email.

“This victory indicates a paradigm shift in which system educators are finally acknowledging that programs and policies rooted in the hyper-surveillance of racialized youth and the securitization of schools do the exact opposite of creating safety, equity, and inclusion.”

It took almost 10 years of community organizing in the form of letters to trustees, walkouts, public deputations, teach-ins, op-eds, and, more recently, the recorded experiences of more than 2,000 underrepresented students to bring an end to the SRO Program in the TDSB. Moving forward, let’s hope other schools boards will follow the lead of the TDSB by listening to community members and organizations that have consistently maintained that even one unsafe student is one too many.