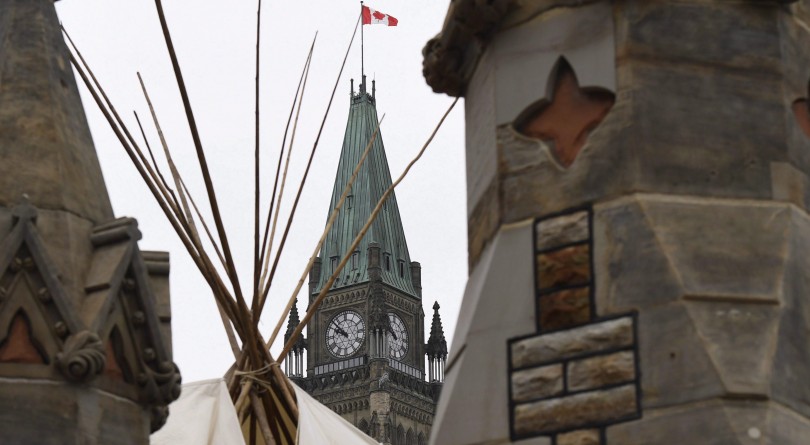 Pamela Palmater is a Mi’kmaw citizen and member of Eel River Bar First Nation. She has been a practicing lawyer for 18 years and currently holds the chair in Indigenous governance at Ryerson University.

In Thursday’s decision in Mikisew, the Supreme Court of Canada (SCC) has rolled back the jurisprudence on the duty to consult to the days before section 35 of the Charter of Rights and Freedoms. It has taken three decades, hundreds of cases and millions of dollars in legal fees to develop clear legal principles related to section 35 constitutional protection for Aboriginal and treaty rights and title. The duty to consult is one of those legal obligations which binds the Crown—both federal and provincial governments—to consult, accommodate, as where appropriate, obtain the consent of First Nations prior to taking any action that they know might impact Aboriginal and treaty rights and title. This duty has been applied to project approvals, decisions and legislative and regulatory provisions. In one fell swoop, the SCC has gutted the duty to consult, creating not only a major gap in section 35 protection of rights, but an easy backdoor for governments to, once again, run roughshod over Aboriginal rights.

There are many decisions that come down from the SCC with which governments and First Nations disagree. Parties on both sides always hope for their legal position to be adopted. Courts are inherently adversarial and not the best place to negotiate resolution of claims. That being said, one hopes that the court will at least follow its own precedent—especially when it is precedent that has been developed and refined over decades. Despite its legal position before the SCC in Mikisew, which argued in defence of parliamentary supremacy, the federal government has acted in the past as though even it realized that that some level of consultation for legislation was necessary. The proposed legislation in relation to Bill S-3, an act to amend the Indian Act’s registration provisions, saw delays in the Senate approval process until Canada consulted with First Nations on the bill. Similarly, the federal government is consulting with First Nations across the country on whether and how to develop a legislative framework to recognize Indigenous rights. The question most understood to be before the court in this case was less about whether the duty applied and more about the parameters of that duty vis-a-vis legislation. That is why this case is such a shock. It is out of sync with SCC precedent on this issue.

The majority of the court held that the legal duty to consult attaches to only to the executive branch of government and not the legislative branch. This, they say, is because of the constitutional principle that reinforces the separation of powers between the executive, the parliamentary and judicial branches. In other words, no branch is to interfere in the business of the others. It is also based on the concept of parliamentary sovereignty, wherein Parliament can make and unmake any laws it wishes within its constitutional authority. That all sounds good in theory, but in reality, one must remember that the executive and parliamentary branches can and do overlap. The same people that sit in the executive also sit in Parliament. Most importantly, the role of the judiciary is to enforce the rule of law—which includes ensuring that governments do not exceed their constitutional authority and corresponding constitutional obligations.

How the SCC applied these principles in the Mikisew case is nothing short of mind-boggling. Somehow, they were able to undo decades of their own jurisprudence on the Crown’s duty to consult by saying the Crown is not the Crown when it is Parliament. In previous cases, the Crown is the Crown is the Crown when it comes to the legal obligations towards First Nations. For decades First Nations have been challenging legislative and regulatory provisions for breach of section 35 constitutional rights—including the Crown’s failure to consult. In order to give Parliament complete immunity for the development of legislation impacting First Nations, the SCC had to portray the constitutional principles of the separation of powers and the duty to consult on section 35 rights as competing principles, where one had to trump the other. In fact, many constitutional principles can coexist. Isn’t the whole purpose of reconciliation—at least from Canada’s perspective—supposed to balance constitutional rights and principles and find a way to make them work together? What about the decades of constitutional jurisprudence that says section 35 Aboriginal and treaty rights and title are to be given a large, liberal interpretation? Instead the court said to do otherwise would be too hard, i.e. “an enormously difficult task”—an excuse it has not allowed the government to use to defeat section 35 rights in the past.

RELATED: Few Canadians ever set foot on a First Nations reserve, and that’s a problem

So what now? Now, the fairly empty box of rights contained within section 35 has been gutted. There is no doubt that government legislation is one of the primary ways in which First Nations have been deprived of the full enjoyment of their Aboriginal and treaty rights and title, and the inherent right to be self-determining. The whole concept of reconciliation and resolving disputes through negotiation requires that the duty to consult be met before legislation is enacted where it can and does do irrevocable damage to First Nation rights. Justice Abella wrote a very different analysis reminding the SCC that the decades of jurisprudence stand for the constitutional principle that: “The honour of the Crown is always at stake in its dealings with Indigenous peoples, whether through the exercise of legislative power or executive authority.” This means that the duty to consult applies to all government conduct which may adversely impact Aboriginal rights. In her words:

Endorsing such a void in the honour of the Crown would create a corresponding gap in the s.35 framework, leaving Aboriginal rights-holders vulnerable to the same government objectives carried out through legislative, rather than executive, action.

While she agreed that the concepts of parliamentary sovereignty and privilege was necessary for the legislative branch to do its work, she also found that those principles could not displace the honour of the Crown. Yet, this is in fact what the SCC has done. Now instead of consulting on Aboriginal rights before legislation is enacted, or negotiating issues, governments will be free to do as they please, while First Nations will be forced to spend more money, time and effort to protect their rights after the fact—usually after the damage is done. This decision is a shockingly impoverished view of section 35 rights, especially given that so many First Nations don’t even have enough money for clean water, let alone millions for court cases. It also limits the very few options First Nations have for fair resolution.

Ironic that it’s the same omnibus bills that inspired the Idle No More protests all over Canada, that are unravelling section 35 jurisprudence today. Perhaps this case is another spark…