The tragic echoes in the cycle of Black death

As a verdict loomed in the Andrew Loku inquest, Pierre Coriolan was killed in Montreal—reminders of why Black Canadians fight for change 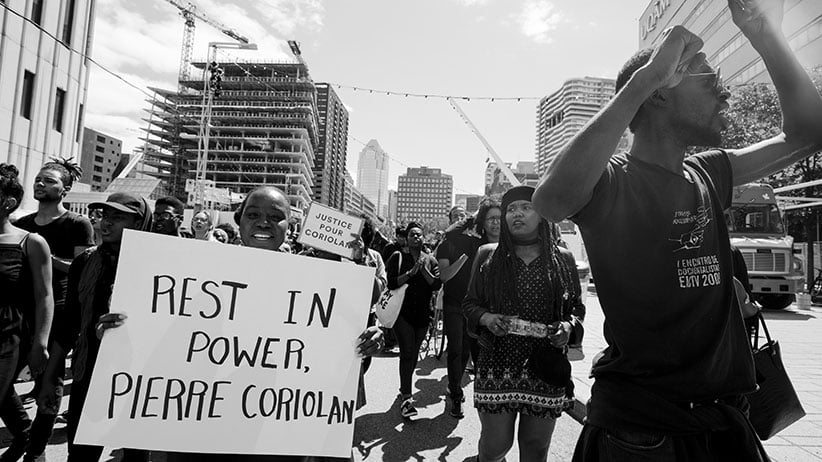 Venetta Gordon of Black Lives Matter Montreal holds up a sign in solidarity to Pierre Coriolon, a 58-year-old Black man who was tasered, shot by rubber bullets and then shot dead by Montreal Police in June 2017. (Photograph by Jalani Morgan)

The deaths of Trayvon Martin and Tamir Rice showed us that innocence is not granted to Black children; they are seen as imposing threats. The killing of Michael Brown and Eric Garner symbolized the rushed judgement calls by police that result in the loss of a life. Philando Castille’s death showed us that complying is insufficient to keep your life. The ways in which the legal system addresses these deaths through criminal law varies, but it mostly results in little to no accountability to law enforcement taking a Black person’s life, regardless of an arrest, charge, or legal forum. The cycle of Black death at the hands of police follows a tragic—and tragically familiar—cycle.

And indeed, we saw that cycle play out in quick succession this summer in Canada. On June 27, while many waited for a verdict for the inquest into the 2015 death of Andrew Loku in Toronto, Pierre Coriolan was killed, shot dead by Montreal police; both men were Black, living with mental health issues, and killed by police during a mental health crisis.

Over the past two years, the public has been privy to details on Loku’s death. And while the circumstances surrounding Coriolan’s killing require more detail, what is clear is that both men were killed by police during a crisis intervention, with little to no de-escalation tactics deployed.

READ: How activism has evolved for Black Canadians

The echoes between the lead-up and results of these twin deaths only reinforce the feeling that the usual response—to dismiss these deaths as one-off situations involving bad-apple cops—holds little water. They cannot be viewed in isolation. And the way these tragedies stitch together only affirm the feeling that each event is yet another addition to a historical narrative of police violence and Black death, and a grim reminder that no lessons have been learned. Except, that is, by the Black community: that we must agitate for change.

On July 2, days after the verdict was delivered in the Loku inquiry, Black Lives Matter Montreal, Montreal Noir and Hoodstock organized a vigil to honour Coriolan’s life in Montreal, a march in resistance to the system that killed him. At the protest—which began at the apartment complex where Coriolan lived and died, and wound its way into the Montreal International Jazz festival—Montreal Noir’s Robyn Maynard highlighted where the responsibility for his death lies: the police officers who killed him, the police force that is not taking any responsibility to end racial profiling, and Quebec for failing to institute a genuinely independent investigative body and instead creating a model closely aligned with Ontario’s Special Investigations Unit (SIU).

That’s a problem. In Ontario, before the creation of the SIU—a civilian oversight agency that investigates police misconduct and has the authority to lay criminal charges upon police officers—police would investigate police. It has been revealed, however, that SIU’s civilians are not always truly civilians, as some SIU staff are former police officers. The SIU’s decision to not lay criminal charges for Loku’s death sparked the creation of a tent city in Toronto—a two-week protest by Black Lives Matter Toronto in March 2016. BLMTO’s tireless advocacy kept Loku’s name and memory on the public consciousness, prompting interest in last month’s coroner’s inquest. And Quebec, where Coriolan died, has a similar track record as Ontario in terms of favouring police over civilian complaints.

There may well be an inquest into Coriolan’s death forthcoming. But the one into Loku’s death—and the ones before it—offers a bleak picture. “Black communities never win with inquests,” said Idil Abdillahi, the former chair of Across Boundaries, an agency that provides holistic mental health addiction services for racialized communities. “In fact, we need to understand and place Loku’s fatal shooting within the deeply troubling historical context of police violence and death of Black people in this city, province and country,” she added, noting the 1978 shooting of Buddy Evans. “We have to be clear about who keeps winning. Who keeps winning are the people who continue to kill Black people, and we have to sit in these processes, and listen to the fact that yet again, it is justifiable for Toronto Police Service to shoot and kill a Black man.”

Many thought that things would change around policing and de-escalation when Ontario ombudsman Paul Dubé unequivocally stated the police needed more de-escalation training in a report following the death of Sammy Yatim. “Ontario officers have plenty of training on how to use their guns,” he said in June 2016, “but not enough on how to use their mouths.” Between Yatim’s killing in 2013 and the release of this 2016 ombudsman report, 19 people were killed by police in Ontario. Citing 7.5 hours of de-escalation training at the Ontario Police College and other bare-bones requirements that vary across police services, this bears a striking resemblance to the three hours of de-escalation and crisis intervention during police academy training that Montreal police have admitted they receive. Directly following Coriolan’s killing, Montreal’s police chief oddly insisted that police officers had the tools to de-escalate, but are not completely trained on them. Similar to coroner’s inquests in Ontario, Quebec police have been subject to recommendations, as they were following the 2014 shooting of Alain Magloire. And so the conversations continue, seemingly never-ending. 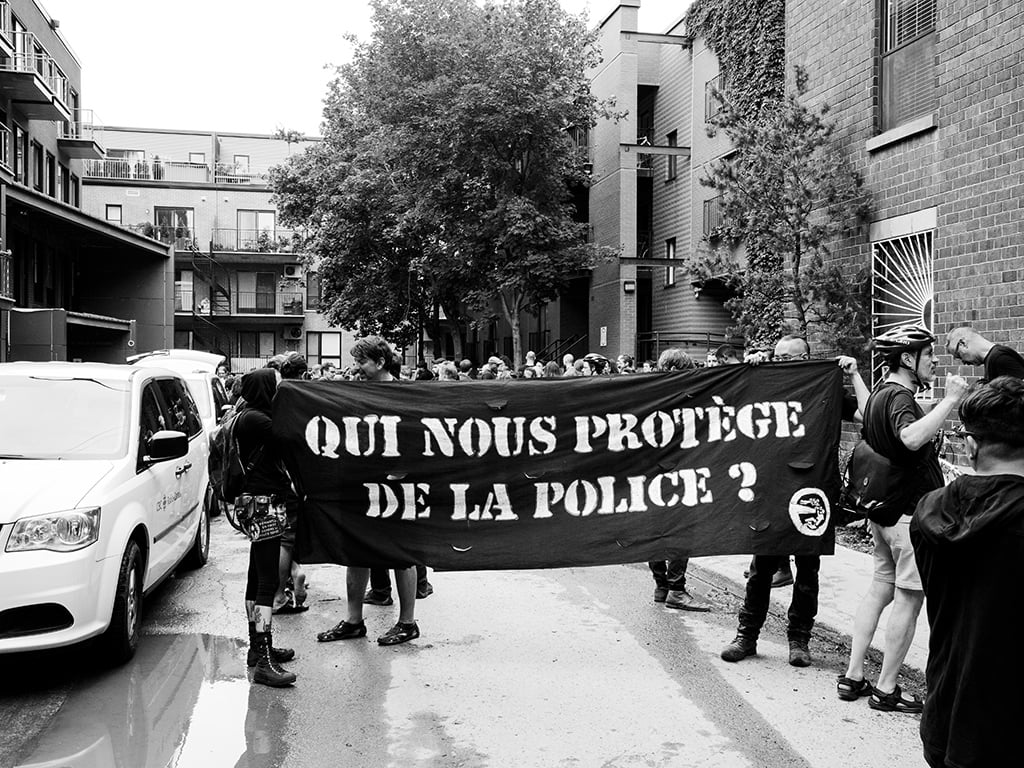 At the Montreal protest, Venetta Gordon of Black Lives Matter Montreal read the three organizations’ demands, which were later repeated onstage at the Jazz Festival. The first three requests were reliable standbys from decades of tireless activism and organizing around anti-Black racism in Canada: The groups called for mental health resources to address issues of anti-Black racism, systemic racism, queer and transphobia, and for the resources to be safe, helpful, physically and financially accessible to all Black people; for Black-run social services and mental health/community services to be better funded; and for police to not be the first to intervene in a mental-health crisis.

Lucas Charlie Rose, of Black Lives Matter Montreal, spoke about his personal experiences as a Black trans man who suffers from psychotic episodes and worries, after Coriolan’s death, what could happen if police were to come knocking on his door. “I’ve been wondering: where I am supposed to go if I have any crisis if I can’t have it in my own apartment?” he said. “That crisis is going to happen.” Later, on Desmond Cole’s Newstalk 1010 radio show broadcast from Montreal following the protest, Rose said that people like him are not safe in Montreal, and the killing of Coriolan shows us that we have to provide the mental health resources Black queer and trans people do not typically have access to, and ensure people do not get to the point Coriolan did.

Gordon echoed Rose’s sentiment: “I believe that folks who suffer from mental illness and display mental distress should have the right kind of support when having a mental breakdown. There are different reasons that could affect how a person suffering from mental illness functions and responds to people, especially a police officer. A cop yelling to ‘drop your weapon’ will not resonate with that person; nothing is clear in their mind. Police officers shouldn’t be first responders on mental distress calls. We need better mental health services for Black folks that understand intersectionality.”

Here, again, is another familiar demand—having police drop their weapons, and acknowledge that the raising of voices is a poor response to a mental health crisis, were both flagged in the Andrew Loku case. History repeats itself—and tells a story.

Taken together, and as part of long histories, it is little wonder that the responses to these events became, almost by necessity, calls to action. It’s what spurs the sense of responsibility that Black Canadians have toward each other, a vision of a community threatened by white supremacy, which must be dismantled. It may not always look the same, but the vision of Black freedom and liberation is the fuel and the goal. “Those of us who have the luxury of being here, how much longer are we going to tolerate this police violence?” activist and journalist Desmond Cole said at the rally. “All witnesses to this have a responsibility.”

Indeed, confronting white supremacy in Canada, a country that often openly denies its existence, does require a fight. White supremacy is insidious and covert in Canada, and when Black Lives Matter Toronto’s Janaya Khan spoke at the vigil of our need to not be out-organized by white supremacy, I thought of how the media reports police brutality on Black bodies; of the missing disaggregated race data that activists have been pushing for to show Canadians who is being profiled, injured and killed by police in this country; of how whiteness is constantly understood as neutral, unchecked and often immune to critique. Later on, while marching, the protest was met with Montreal police in armoured gear: here was white supremacy’s disproportionate reaction to Black organization and protest, normalized.

At the Montreal vigil, Shanice Nicole Yarde recounted the pain in witnessing the killing of Black people and white indifference as she read a series of poems. “And the sickly sweet topping on top of this cupcake,” she read, “is that still even after all of this death is that still even in spite all of this stench they can turn around and deny, and lie, and smile when I sit there in tears, in fear, as they laugh as if there’s something funny about Black fear.”

I recognize the fear she referenced: It’s what many of us feel when we see another Black person killed in this country by law enforcement, and nothing changes. The denial is inherent in the ways that tragic and avoidable deaths like Pierre Coriolan’s are viewed as isolated incidents, despite a clear pattern. Reports, inquests and recommendations, year after year, merely serve to reflect this reality. Seen as a whole, we see the cycles repeat. We cannot keep watching idly.