The U.S. has gone rogue, and Canada may be caught in the crossfire

Adnan R. Khan: The assassination of Qassem Soleimani could set Iraq on fire, with dire consequences for Canadian troops 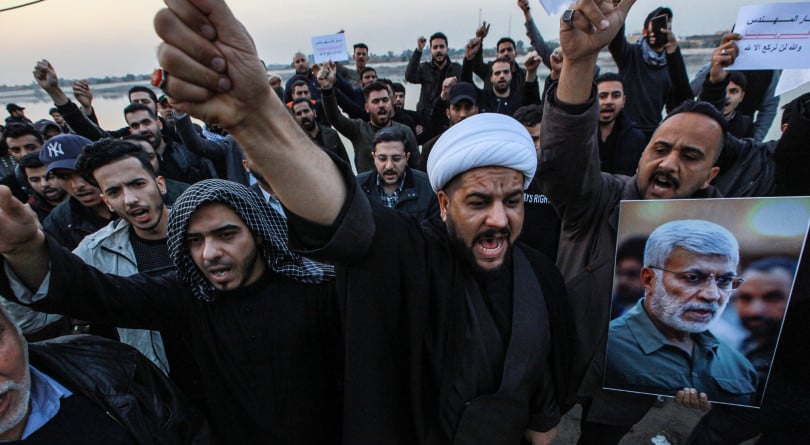 Last spring, while out on a tour of the Canada-led NATO training mission in Iraq, I had a chilling exchange with a Canadian soldier from the force protection unit deployed to the Taji Airbase north of Baghdad. That morning, we were out at the Iraqi Army’s Military Engineering School where Canadian trainers were helping their Iraqi counterparts develop a course curriculum for mine clearance and improvised explosive device disposal.

To get to the school we left the highly-fortified ‘Green Zone’, where international troops are based, in a convoy of armoured vehicles and traveled into the ‘Amber Zone’, the sprawling compound where Iraqi army soldiers share space with Iran-backed Shia militias.

It was a short drive, no more than five minutes but the entire process involved a detailed planning meeting where the force protection unit went over their duties and contingencies if something went wrong.

I was perplexed, not to mention a little embarrassed about the fact that they would be going to so much trouble for a single journalist. It’s not as if we were actually leaving the Taji base. The Amber Zone was itself surrounded by a perimeter wall and heavily guarded by Iraqi troops. What was the threat, I asked?

“The Shia militias,” the soldier told me, requesting anonymity. “We see them sometimes watching us. They take notes on our movements. We’re not sure what they’re up to.”

READ MORE: Can Canadian soldiers stop the next Iraq insurgency?

The goal of the NATO mission, Major-General Dany Fortin, its top commander at the time, told me, was to help Iraq fend for itself so it would no longer need to rely on foreign-backed militias. What the mission needed, he added, was time.

Time ran out on Thursday when a U.S. Reaper drone fired a barrage of missiles at a convoy leaving Baghdad’s airport, killing Qassem Soleimani, the head of the Iranian Revolutionary Guard Corps (IRGC), and Abu Mahdi al-Muhandis, the deputy head of the Hashd al Shaabi, the formal name of the umbrella organization representing the Shia militias.

The main target, according to Donald Trump’s tweets and administration officials, was Soleimani but the victims are likely to mount as Iran contemplates its response.

One has to ask what the endgame is for the Trump administration. There’s little doubt Soleimani was a dangerous figure in the Middle East and a key to Iran’s regional ambitions. But what happens without him?

The Iranian regime will not collapse. Soleimani may have been a central figure, arguably Iran’s second most powerful man after Ayatollah Khamanei, but the organization he headed is well-established and thoroughly dug into it positions in the Middle East, including Iraq and Syria. Soleimani himself had headed the IRGC since 1998, enough time to leave a lasting mark on its structures and strategies.

What comes next will be devastating for the region. The key question now is whether or not U.S. forces will remain in Iraq. For months, Iranian supporters in Iraq’s parliament have been calling for the U.S. to leave but they’ve failed to muster enough support to pass bills that would force a departure.

That could very well change. The Iraqi government has condemned the assassination, pointing out that the U.S. mandate in the country—largely a training mission alongside the broader Operation Impact coalition supporting Iraqi forces in the fight against ISIS—does not include these kinds of unilateral actions.

The Iraqi parliament is scheduled to meet in an emergency session on Saturday to discuss what to do next. If they pass legislation forcing a U.S. withdrawal, Iran will claim victory and the U.S. will look like the loser.

An American military withdrawal would also produce some dangerous ripple effects. In the absence of a U.S. presence, the NATO training mission, now headed by Canadian Major-General Jennie Carignan, would be in jeopardy. The mission relies heavily on U.S. logistical support without which it is unlikely to survive.

A NATO withdrawal from Iraq would leave the Iraqi army in dire straits. It is nowhere near ready to handle Iraq’s security on its own. During the Mosul offensive from October 2016 to July 2017, it lost somewhere in the range of 40 per cent of its counterterrorism forces, the best-trained soldiers the country had.

The weakness of the Iraqi army is primarily why Iranian-backed Shia militias still wield so much influence in the country. If international forces depart, it would ostensibly hand Iraq over to those forces. So, in claiming to weaken Iran’s influence in Iraq, Trump may very well have strengthened it.

If the Iraqi government doesn’t force the U.S. out, Trump has potentially kicked off an escalatory cycle that will lead to all-out war.

According to the New York Times, quoting a senior administration official, one of the reasons for Soleimani’s assassination was concern among Trump’s senior advisors that the president had sent too many signals indicating the U.S. was unwilling to go to war with Iran. The logic – and I use the word loosely – would be that a major escalation would demonstrate American resolve. That in itself assumes either that the Iranians will back down or the U.S. is, in fact, willing to go to war with Iran, undermining a key Trump pledge not to involve the U.S. in more conflicts.

The problem is, the choice the Iranians now face is not between all-out war and concession; they still have some major escalatory cards to play themselves. They could, for instance, disrupt oil flows through the Persian Gulf. They could also unleash the full force of the Shia militias under their control, targeting U.S. interests in Iraq. They could also order those militias to stop fighting the remnants of ISIS in the country. And if ISIS is smart, it will now send the message to the Iranians that it will focus its attention on U.S. forces.

And thus begins the inexorable slide into chaos and war. Some might even argue the war has already begun. By most measures, the killing of Soleimani was an act of war. The tragedy that history will record is that Iraq was showing some promising signs. Young people had risen above sectarian divides and taken to the streets to protest government corruption. Iraqis themselves were calling for an end to Iranian influence in their country.

In a single, inexplicable moment, the Trump administration has blown all of those possibilities into oblivion. It appears the decision to carry out the assassination was made unilaterally (neither NATO nor the Canadian armed forces responded to requests for comment but military sources I contacted in Baghdad say no one was consulted) and it appears the U.S. is already preparing for some kind of military escalation, with a troop buildup currently under way in the Middle East.

The question Canadians must ask is if the training mission in Iraq is now worth it. Canadian soldiers will no doubt be caught in the middle of the war a rogue U.S. administration has just launched. And in this kind of war, there will be no winners.