The UN meets the Trump doctrine: blow everything up

Terry Glavin: There is a lot wrong with the UN Human Rights Council, but the United States' abdication of its UN leadership role serves no one 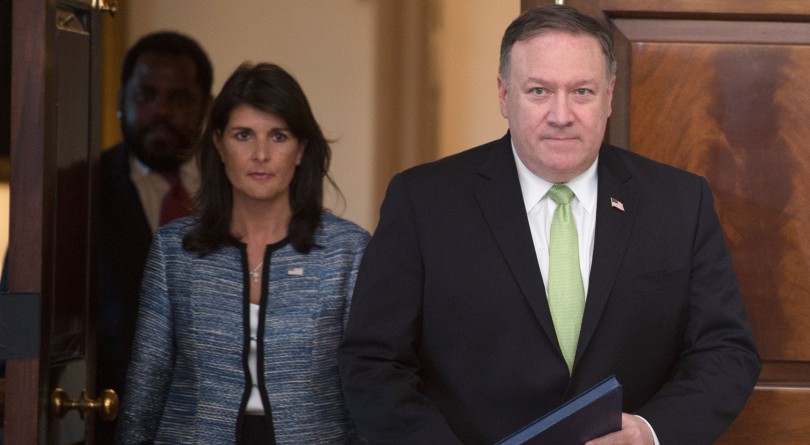 US Secretary of State Mike Pompeo and US Ambassador to the United Nation Nikki Haley arrive at a press conference at the U.S. Department of State in Washington D.C. on June 19, 2018. The United States announced that it is withdrawing from the UN Human Rights Council. (ANDREW CABALLERO-REYNOLDS/AFP/Getty Images)

It’s exactly the way things went with NAFTA, the 2015 Paris climate treaty, the 25-year Oslo Accord consensus on Israel and Palestine, and the G7’s long-standing, ironclad solidarity on free trade. With its melodramatic withdrawal from the United Nations Human Rights Council this week, Donald Trump’s White House has again made its rules of engagement with the world crystal clear and perfectly comprehensible.

If it isn’t working the way it’s supposed to, or if it isn’t working at least the way America wants, then the rest of us better fix it or Donald Trump will just blow it up. If there’s such a thing as the Trump doctrine, this is it.

What makes the florid rhetoric of Trump’s UN ambassador Nikki Haley on Tuesday such a useful illustration of the doctrine is that everybody knows the UN Human Rights Council in Geneva is every bit the “cesspool of political bias” she said it is. Haley put everyone on notice a year ago that without root-and-branch reforms, the U.S. was going to pull the plug. And that’s just what the U.S. did this week.

Haley is not wrong to point the finger at a blue-ribbon coalition of rights groups, led by Amnesty International and Human Rights Watch, that had balked at the draft UN General Assembly resolution for reform she had cobbled together. The rights groups ended up siding with European states that were nervous that Haley’s resolution ran the risk of inviting mischievous amendments that would weaken the Human Rights Council rather than strengthen it.

The point of Haley’s resolution was to make it easier to jettison mass-grave and torture-chamber regimes from Council’s 47-member states, which are elected for fixed terms in a formula ensuring proportionate geographic representation. The resolution would also have shredded the Council’s obscene Agenda Item 7, a unique annual ritual of ganging-up and haranguing that has produced 70 anti-Israel resolutions over the Council’s 12-year history—more than Yemen, North Korea, the Democratic Republic of Congo, Darfur and Sri Lanka combined.

By way of further comparison, not one resolution has singled out China, Cuba, Venezuela, Saudi Arabia or Qatar.

This is how Kenneth Roth, executive director of Human Rights Watch, responded to the U.S. withdrawal this week: “All Trump seems to care about is defending Israel.” But this does seem a bit churlish. Two former UN secretaries-general, Ban Ki-Moon and Kofi Annan, also identified Agenda Item 7and its weird obsession with Israel as a preposterous black mark against the Council. Besides, you’d think that reforming the Council to bar the world’s worst human rights abusers from membership should be a priority for any respectable international rights group.

This is not to say the U.S. can be trusted to lead reform at the UN.

Without the UN Security Council to enforce its mandate, the Human Rights Council is merely a bully pulpit, but the Security Council has been taken hostage by veto-holders Russia and China and the U.S. has shown no interest in breaking their stranglehold. Backed by 115 of the UN General Assembly’s 193 member states, Security Council members France and Britain have proposed a suspension of the permanent members’ veto powers in cases of genocide, crimes against humanity and large-scale war crimes. Moscow and Beijing, of course, oppose the idea. But so does Washington.

In his joint announcement with Haley Tuesday, U.S. Secretary of State Mike Pompeo put it this way: “The Human Rights Council has become an exercise in shameless hypocrisy, with many of the world’s worst human-rights abuses going ignored and some of the world’s most serious offenders sitting on the council itself.”

It’s hard to argue with that, except that Vladimir Putin’s Russia announced straight away that the Kremlin intends to more or less take Washington’s place, with a bid for a three-year term beginning in 2021.

No good will come of this. Russia has devoted its efforts at the Council to ruthlessly hobbling efforts to reign in the worst excesses of the UN’s police states. Already, nearly half the Council’s 47 members are ranked by Freedom House as “unfree” countries. The rest of the membership is split between partly-free states and democracies.

Last year, in testimony to a Senate Subcommittee on Multilateral Institutions, Hillel Neuer of UN Watch warned that the U.S. would be making a big mistake to just bolt. “The U.S. should hold on to its council membership in order to lead the opposition in an arena that influences hearts and minds worldwide,” Neuer said. “The council is a dangerous place. But we already witnessed in the 2006-2009 period how the absence of the U.S. failed to make the problems go away, and the situation only got worse.”

Still, the American presence in Geneva after Barack Obama’s White House brought the U.S. back into the fold didn’t do much good, either. Joseph Torsella, Obama’s ambassador for UN reform, had pledged to form a “credibility coalition” of UN member states to promote fully competitive elections to the Council and to ensure that successful candidates were fully committed to the Universal Declaration of Human Rights. But the Obama administration didn’t follow through.

The U.S. delegates just sat there while the regime of Libyan tyrant Muammar Gaddafi was elected to the council in 2010. Within three years, China, Cuba, Russia and Saudi Arabia were also elected.

There’s a long and sordid history behind the Trump administration’s decision this week, and it had nothing to do with Zeid Ra’ad al-Hussein, the UN’s high commissioner for human rights, blasting the administration for its wildly controversial policy of separating migrant children from their parents at the Mexican border.

To get to the bottom of the Council’s dysfunction you’d have go back to the final years of its predecessor, the decrepit, useless UN Human Rights Commission that the Council was supposed to helpfully replace. It was 15 years ago that Ambassador Kevin E. Moley, the U.S. permanent representative in Geneva, described the dilemma this way:

“Nations of conscience cannot allow the Commission of Human Rights to become a protected sanctuary for malefactors. We cannot allow human rights abusers to undermine this organization from within. If we were to enact a code of conduct for members, it would have no effect, for lawless governments by their very nature follow neither the dictates of law nor morality.”

Moley’s remedy was straightforward. “We should, instead, consider the simple proposition that only real democracies, democracies with regularly scheduled multi-party elections, independent judiciaries and constitutional guarantees of human rights, deserve membership on the Commission for Human Rights.”

Moley was right, of course. Three months after his speech, in June 2003, Gaddafi’s Libya was elected chair of the Human Rights Commission, with 33 votes in his favour. Canada, the U.S. and Guatemala voted against. The Europeans abstained. The Council that replaced the Commission has not failed to bring disgrace upon itself, either. Following Sri Lanka’s vicious war with the Tamil National Liberation Front, for instance, a Council investigative team came back to Geneva in 2009 with a report that lauded Sri Lanka’s anti-terrorism drive.

Still, the new Council has been an improvement, in quite a few respects, over the old Commission. The Council’s “universal periodic review” mechanism ensures that all countries’ human rights performance will at least get a look-in. In its 50-year history, the Commission scrutinized only a handful of member states. Since it’s establishment in 2006, the Council has doubled the number of completed country-specific reports, and the Council has sent numerous fact-finding missions to rights-trampling member states, not least Syria, Burundi, South Sudan and North Korea.

The Council might be largely toothless and hamstrung by tyrants, but it’s still a bit like a lavishly-funded activist organization, except its researchers hold diplomatic passports, and the world takes it seriously.

It’s hard to see how the Trump administration is serving the cause of America’s human rights ideals by just walking away. It’s even harder to discern how yet another abdication from the United States’ leadership role at the UN is such a bright idea.

But everybody knew that if the United States got no traction in its reform agenda this year, there would be hell to pay. And there was.

And that’s why Donald Trump just blew it up.